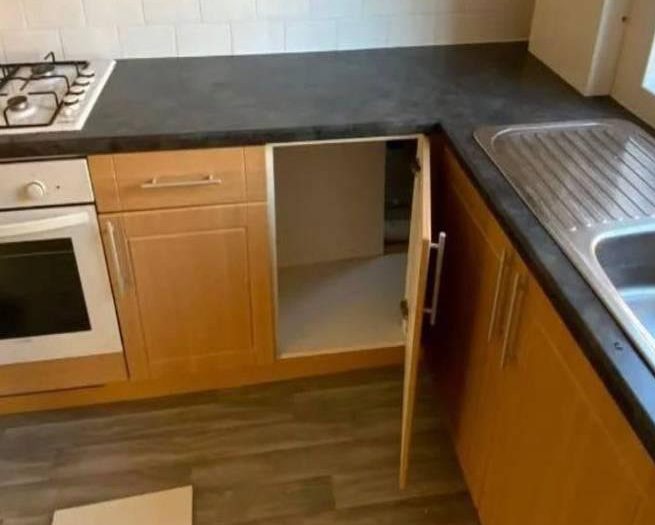 Moving into a new home is both stressful and exciting, and this couple got an added dose of shock when they began to get settled in theirs.

A woman (name withheld) shared a video of her new place on Facebook recently… but not to show off her decor.

Instead, she showed what her and her partner discovered while unpacking – a ‘secret room’ hidden behind a tiny hole.

The post on the group Things Found In Walls – And Other Hidden Findings, which has now been deleted, detailed the couple’s creepy discovery.

Zooming into the under-sink cupboard, we see a small hole in the wood at the back. The woman then shows what’s behind the gap, revealing a rubble-filled room.

‘Just rented a flat with my boyfriend and found a room inside our kitchen cupboard,’ read the caption. ‘Definitely gonna leave something weird in it for the next tenants when we move out.’

The abandoned space is big enough for a washroom or reading nook, with a window in the side to let in light. Worryingly, it’s also home to an electricity or gas meter and some exposed wiring.

It’s not clear why the room was blocked off, but the amount of debris on the floor suggests it’s been out of use for some time.

Commenters lamented the strange layout choice, with one saying it was a ‘waste of good, natural light’.

Others already had designs on a secret sanctuary of their own. One mum joked: ‘I would turn it into a hideout to study or hide and eat my kids’ fave snacks so I wouldn’t have to share with my kids.’

Another wrote: ‘I would totally make that into a comfy little hiding spot. Husband getting on your nerves? Run to the hiding spot.’

Getting through that gap wouldn’t exactly be inconspicuous, but there’s definitely scope to revamp the room and give it a purpose.

Sarah King and husband Toby had the same idea when they found their own secret room, turning it into a dreamy bar area for just £45.

Leaving a spooky present for the next tenants is a fun prank idea, but why not make the most of the space in the meantime?