Couple who matched on Bumble by chance

A couple who had 3,500 miles between their hometowns have revealed how they built a relationship that led to marriage, after matching by chance on a dating app while travelling through the UK’s largest airport.

Mark Lusted, 30, from Luton, Bedfordshire, was making his way through Heathrow airport for a holiday to France when he unexpectedly matched with Leah Woolridge-McPherson, 29, from Toronto on Bumble.

Leah who was on a work trip to London in March 2016, says she was not thinking about relationships until she was convinced by a friend to download the app, which matches people within a set radius of each other.

The couple developed an electric chemistry and went on to spend hours talking on Skype before they managed to meet in person.

Leah has since moved to live with Mark in Luton and the couple got married in Canada in September 2018, two years after they first connected. 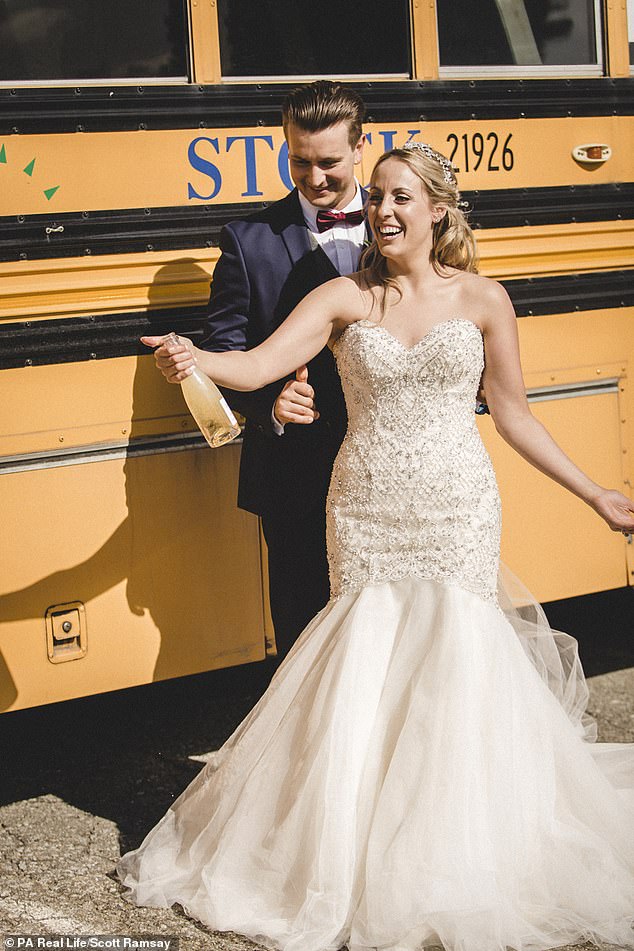 Mark Lusted, 30, from Luton, Bedfordshire, and Leah Woolridge-McPherson, 29, from Toronto, Canada (pictured on their wedding day) have married after meeting on Bumble in 2016 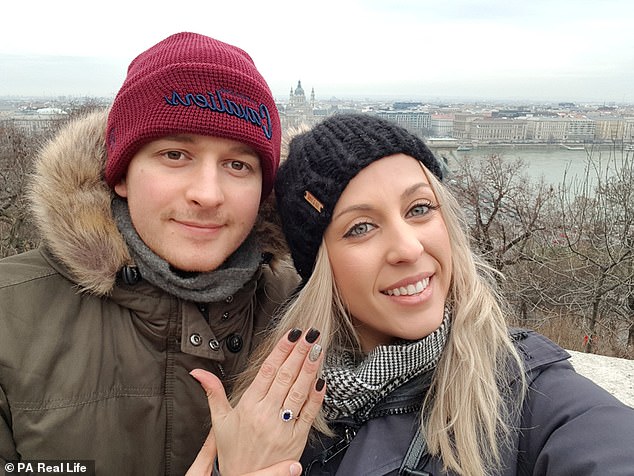 The couple in Budapest, just after they got engaged in December 2017. Their match on the dating app Bumble came unexpectedly while Mark was travelling through Heathrow airport

Leah and Mark confessed their love for one another on their second date, decided to move in together on their fourth and went on to marry in September 2018.

Recounting their courtship, Leah who is a global operations manager told how her relationship with surveyor Mark flourished before they agreed to settle in Luton.

She said: ‘The distance was actually a really good thing. Of course, there were times we missed each other but it allowed us to build our relationship slowly, and become best friends.

‘Mark was so thoughtful and genuinely interested, that he made it easy to be open and honest.

‘At every stage, I would ask myself, “What’s the worst that could happen, that I get ghosted by someone on the other side of the world?”.

‘We love reflecting on our story and it goes to show that you aren’t always going to find love with the people right next to you. It’s about opening up your mind and trusting what the world has in store.’

Mark added: ‘The distance gave us time to properly connect, rather than rushing into an awkward date or a one night stand.’

Leah was recently single and busy working for a charity when the couple initially met. Her role led to her landing a business trip to London in March 2016 to work on WE Day, an annual youth empowerment event. 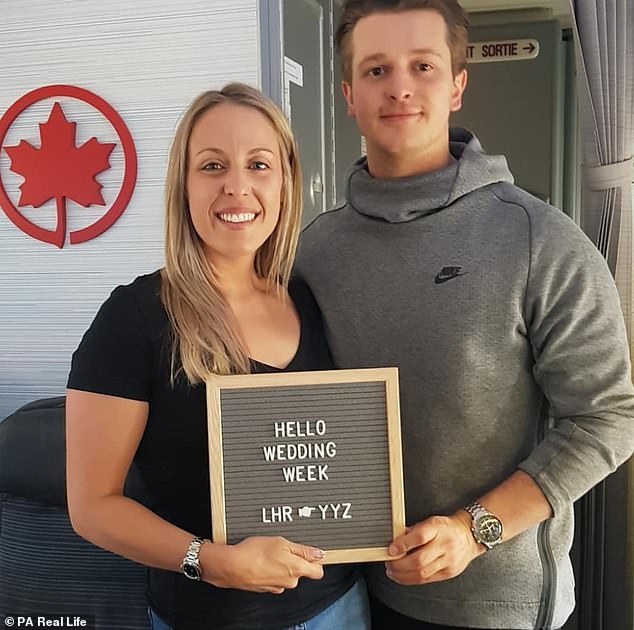 Leah and Mark flying to Canada for their September 2018 wedding, two years after they first met on a dating app 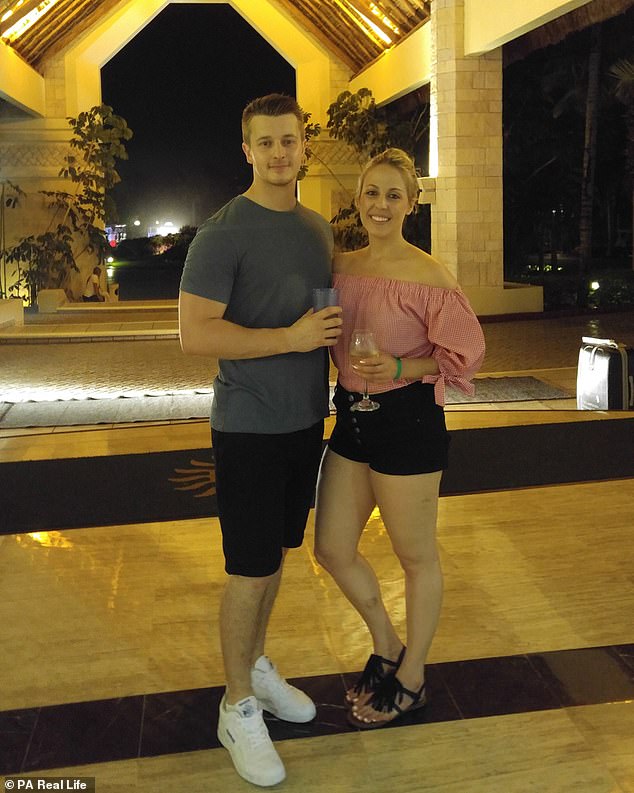 Global operations manager Leah, (pictured with Mark in Mexico where their families met in June 2017) had downloaded Bumble after a roommate convinced her to do it 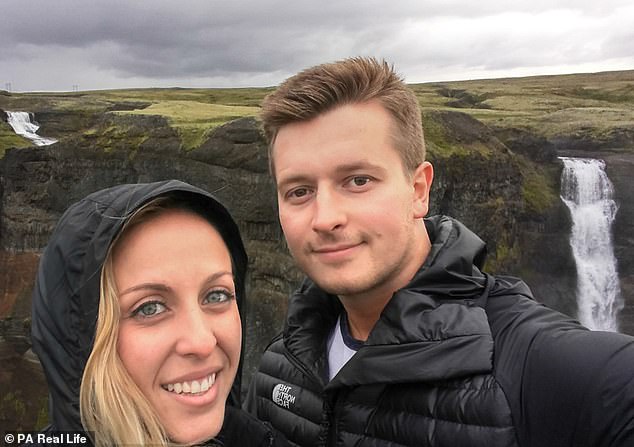 Mark and Leah count their trip to Iceland (pictured) in 2016 as their official ‘first date’, although they had previously met in person in London once before

Staying in Wembley in the north west of the city, she was relaxing at her accommodation one evening when her roommate convinced her to download Bumble for a laugh.

The app has three modes – Date, for relationships, which is the one Leah chose, Bizz for professional networking and BFF to find friendship.

In the past, it has been hailed as the ‘feminist dating app’, because, on Date mode, where users can scroll through potential matches and ‘like’ any that catch their eye, women make the first move and must initiate conversation.

When Leah tried it, she matched with Mark within a few hours, who was passing by on his way to Heathrow Airport, to fly out for a week-long trip to France.

Mark continued: ‘I remember sitting on the Tarmac in the plane, ready to take off, when a match came up – Leah.

‘I’d only been on the app a couple of months myself, having been single a year or so. We soon worked out that, by the time I got home from France, she’d have left England and gone back to Canada, so at first, I never dreamed we’d actually end up meeting.’ 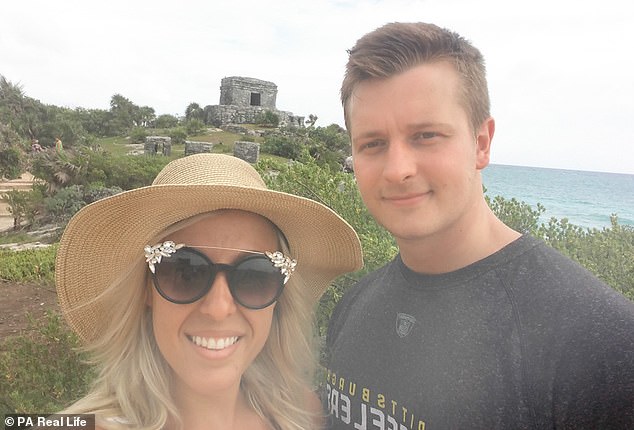 Mark (pictured with Leah in Mexico) says he was in the plane waiting for take off when they matched, he was convinced they would never end up meeting 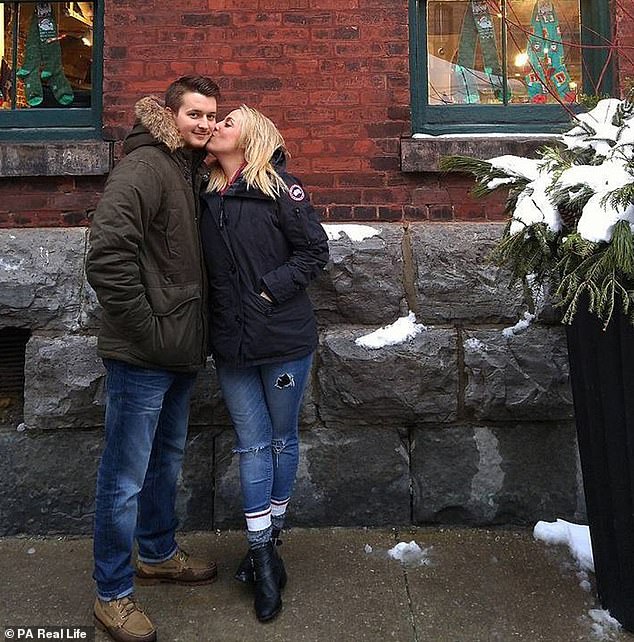 Leah and Mark (pictured in Canada in December 2016) spoke daily using Skype, their conversation flowed naturally despite not having met in person 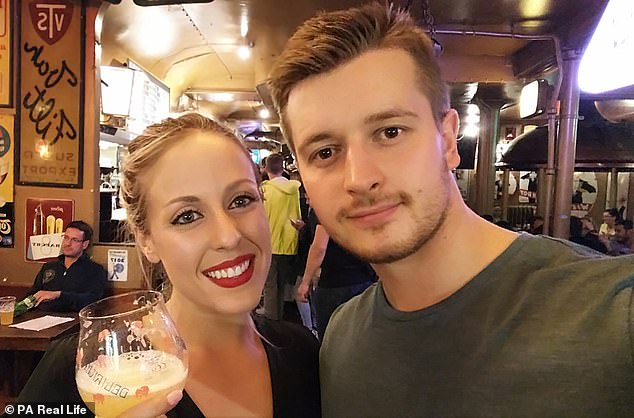 Leah recalls her thoughts turning to Mark as she waited for her flight home after her London trip.

She said: ‘After a week, I went back to Canada. I was in the airport waiting for my flight and asked him if he wanted to keep talking.

‘I thought to myself, “Even if he says no, at least I’ve had a nice chat with someone.”

‘But when I landed and switched my phone back on, I had a message from him saying that he did.’

The couple began to video chat every day, both being amazed at how naturally the calls flowed, despite the fact they had never met in person.

Then, after a month, they decided to organise their first official date – which they agreed would be a week travelling through Iceland in a camper van, and booked flights for August 2016.

Before that, though, in June, Leah ended up back in London for a work trip, so they had an impromptu meet-up after exactly 100 days of talking. 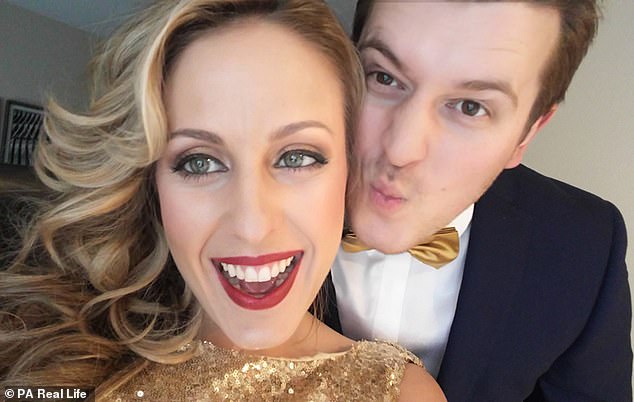 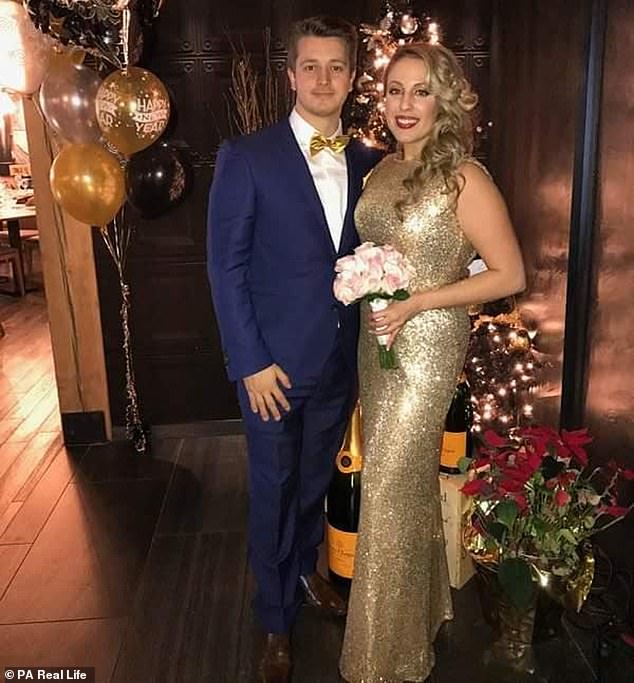 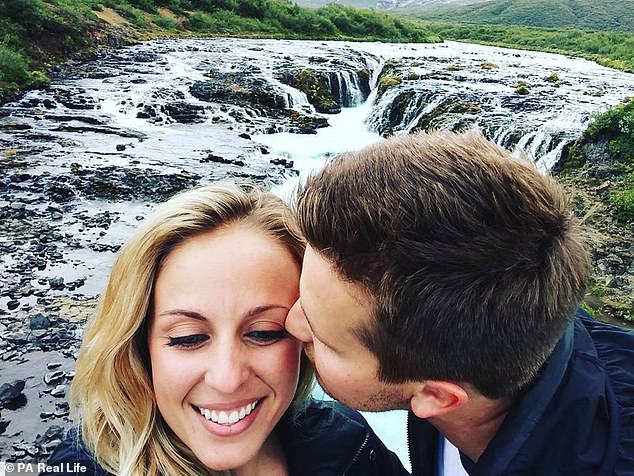 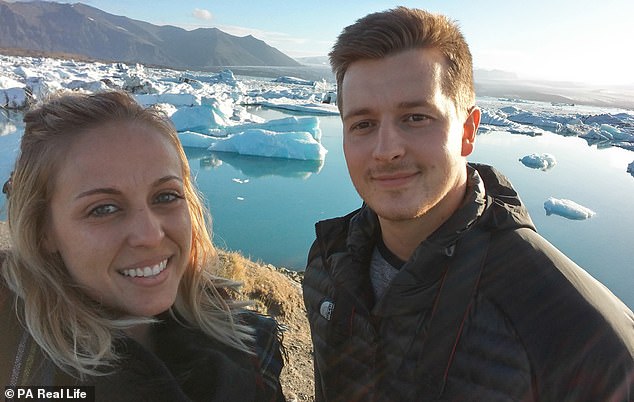 Mark (pictured in Iceland with Leah) told Leah that he loved her for the first time, on the last night of their trip to Iceland

She continued: ‘It was so serendipitous. There were so many signs that the world was throwing us together.

‘I remember being so nervous before actually meeting Mark in the flesh. I kept thinking, “We better like each other – we have a trip to Iceland booked in a few weeks.”

‘But we had such an amazing time. Mark showed me all the sights of London like the Shard and Borough market. We even went to an ice cream decorating class.’

The pair count their trip to Iceland as their first official date – especially as that was where they said, ‘I love you,’ for the first time and became a proper couple.

Mark said: ‘On the last night of the trip, we were sitting outside on a picnic bench talking about what would happen next, when we both went home.

‘It was such a beautiful setting – and that’s where I told Leah I loved her for the first time and she said it back.’

From there, the now-official couple’s second date was when Mark came to Canada in December 2016 for Christmas and Leah’s mother Rhonda’s wedding. 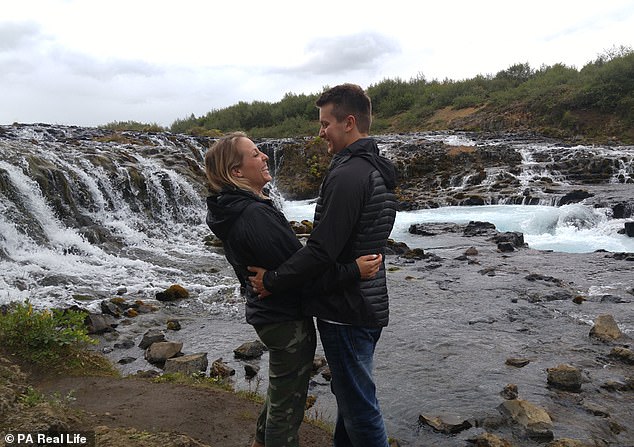 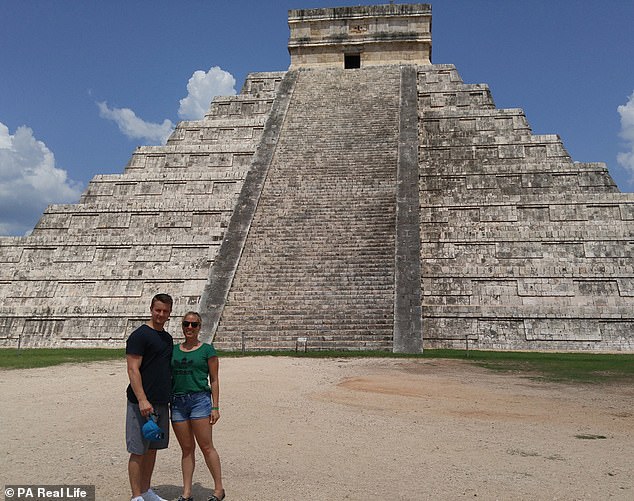 Mark and Leah (pictured in Mexico) enjoyed their official second date in Canada, where Leah’s mum Rhonda was getting married 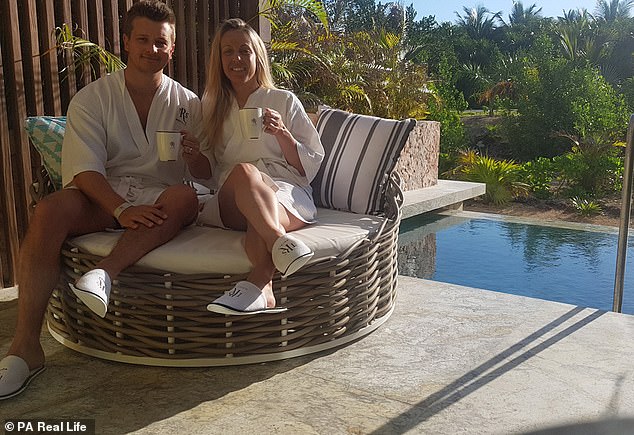 Their third date was a trip to Paris in March 2017, where they decided to move in together.

Two more trips followed – one to Mexico in June 2017, where their families met for the first time, with Leah moving to England permanently two weeks later – and one to Brussels for a romantic weekend in August, celebrating one year as a couple.

‘We had spoken a lot about where it would be easiest for us to live. Mark had applied for a Canadian visa and I had applied for a UK one. We had a big spreadsheet weighing up all the pros and cons, and even considered going out to China to earn a living teaching English,’ says Leah.

‘But in the end, we decided we wanted to be rooted and focus on our careers. My UK visa got granted, and where I worked at the time had a UK office I could transfer to, so it made sense for me to be the one to move.’

In December 2017, the pair took their relationship to the next level, when Mark proposed during a trip to Budapest in Hungary, on a balcony overlooking the Danube river, as fireworks went off overheard.

He said: ‘We had actually been saving to buy a flat, so both agreed that a wedding wasn’t on the cards right away – but then Leah saw this vintage ring out shopping one day that she fell in love with. 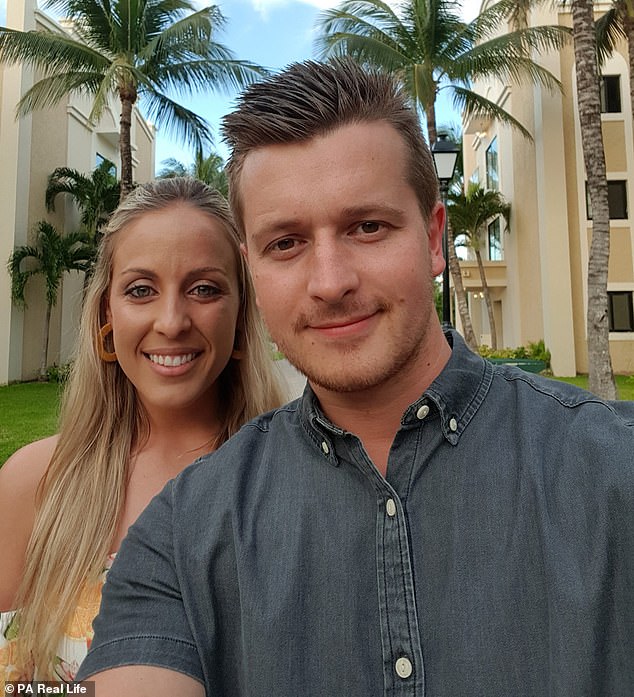 Leah (pictured with Mark on their honeymoon in Mexico) fell in love with a vintage ring while out shopping, at a time when they had agreed a wedding wasn’t on the cards 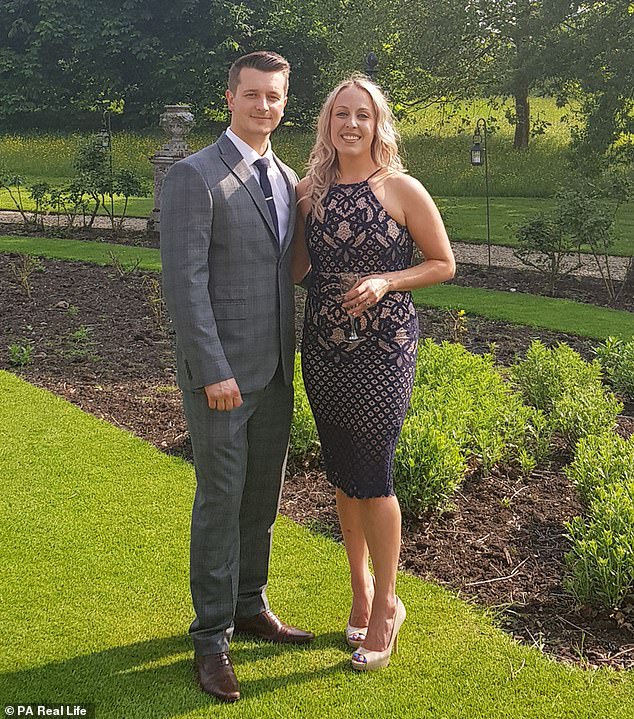 Mark (pictured with Leah in England in June 2018) secretly bought her a vintage engagement ring, which she’d set her heart on 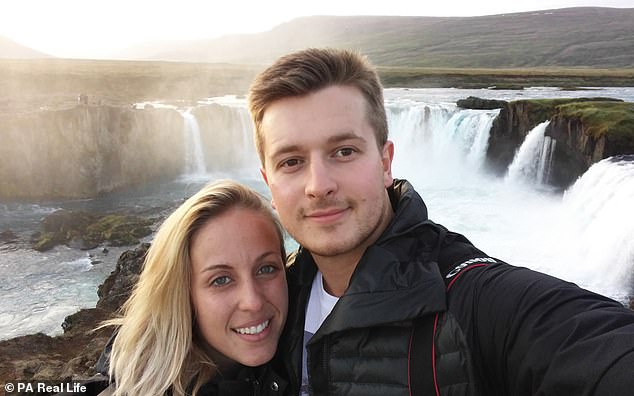 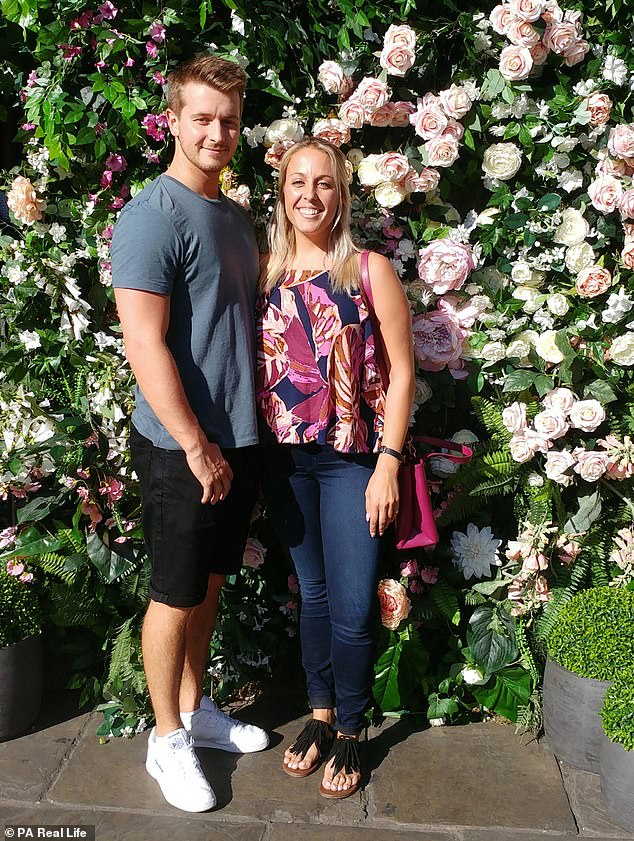 Leah and Mark in July 2017, just after she moved to England. The couple were out shopping when Leah fell in love with a vintage ring, which Mark secretly bought for her 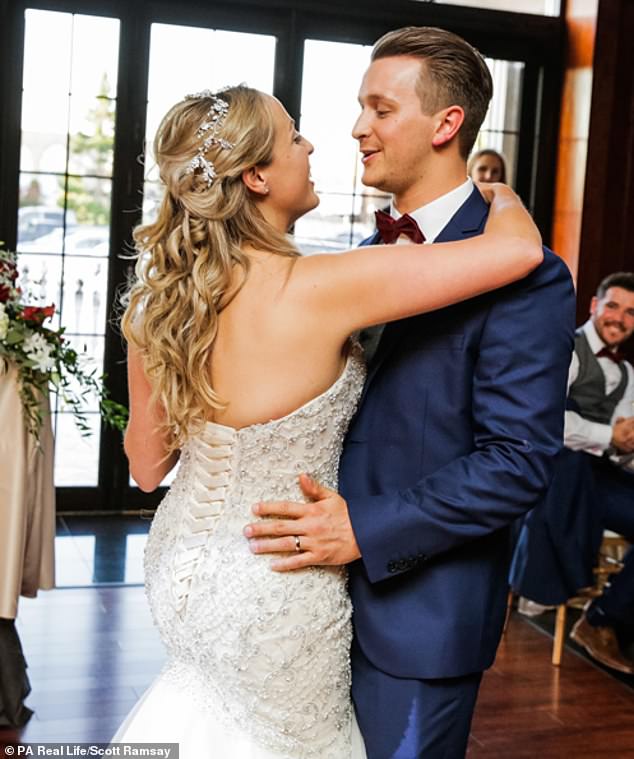 ‘The flat we’d been saving for fell through due to poor contracts and ground rents, so I secretly went back and bought the ring. I even had to ask my mum to use her card, then I paid her back, so Leah wouldn’t notice the transaction on our joint account.

‘I kept up the pretence that we weren’t thinking about an engagement, which was very hard to do, especially when she kept talking about the ring.

‘We even went back to the shop one day as she wanted to look at it again, and she was so disappointed someone had bought it. She had no idea that someone was me.’

After announcing the news to their delighted families, Leah and Mark tied the knot in Canada in September 2018.

Looking back on their extraordinary story, the pair say they are living proof that you never know when you are going to meet your soulmate, and have thanked Bumble for making them believe in love at first swipe. 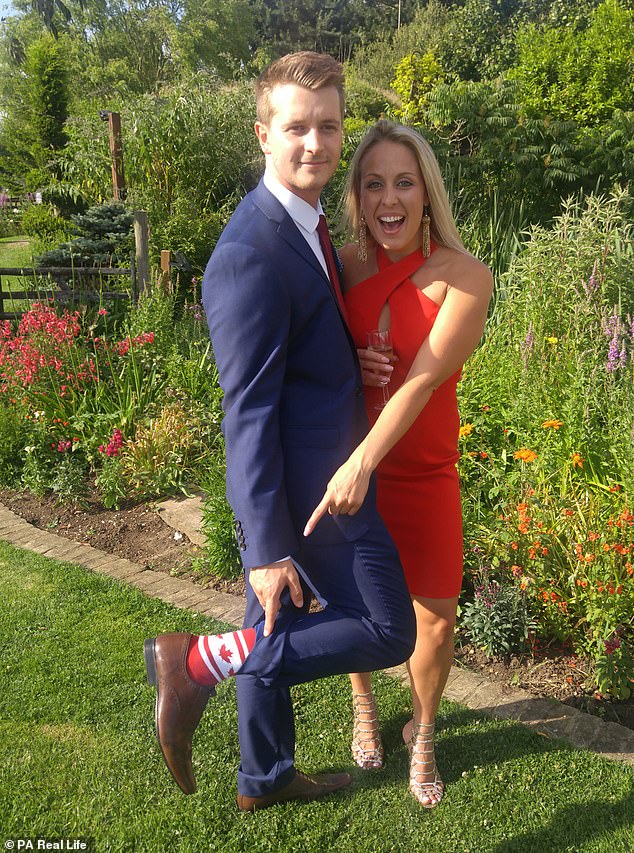 Leah (pictured with Mark in England) revealed their wedding day was like a film, she almost missed the ceremony due to a series of hiccups 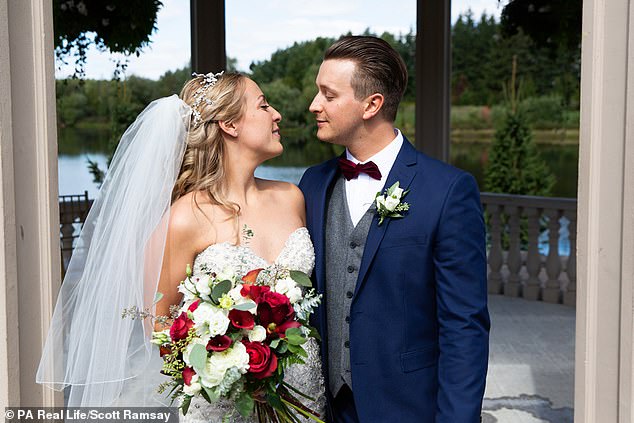 Mark (pictured with Leah on their wedding day) says people enjoy hearing about their love story, especially due to the amount of online horror stories 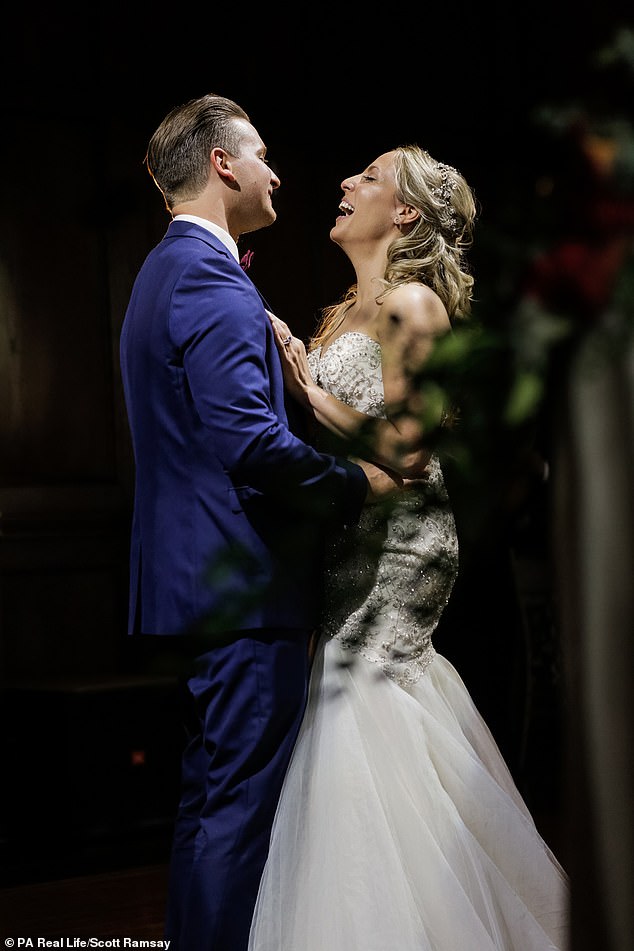 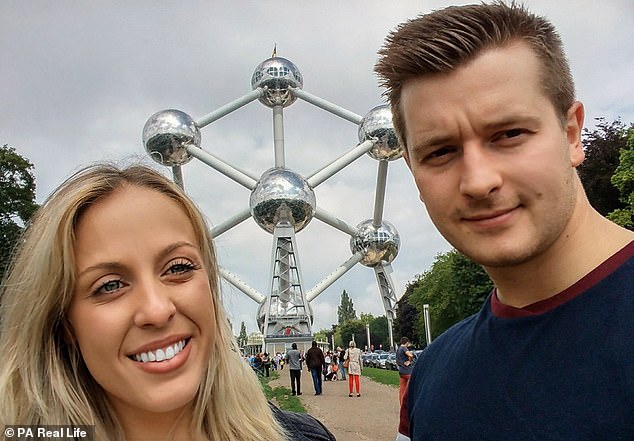 Mark said: ‘You do hear all these online dating horror stories, but people always seem to love hearing ours.

‘Even my friends, who are group of lads, love to hear about how I flew across the world for a date.’

Leah also realises their romance could provide material for a movie script.

She added: ‘The wedding was like something from a film, too. We had a few hiccups – I actually almost missed the ceremony as we’d had awful trouble on the drive with an accident ahead of us, then a road closure, then the bus we’d hired getting stuck, as it tried to turn round in a car park.

‘My bridesmaids were out on the Tarmac directing traffic in their gowns, which was certainly a talking point, but we got there in time and it was the best day of my life.

‘The distance between Mark and I at first was actually a blessing. We had no obligation, no pressure – we could freely talk and get to know one another properly.

‘We’re so grateful to Bumble too. Without that swipe, we wouldn’t have found each other.’