A Christian father in the US has written a letter to his daughter’s high school boyfriend, haranguing him for ‘stealing her virginity’ and calling for divine retribution — and he delivered it to the ex-boyfriend’s home a decade after they broke up, where it was found by the man’s wife.

In the letter, the unidentified father indicates that he has been mulling over his daughter’s loss of virginity for ten years and is still holding a grudge against the teenager — now man — whom she chose to have sex with, denying the father the ‘pleasure’ of ‘giving my pure, virgin daughter’ to a husband.

He goes on to lecture the man for two pages, quoting quite a bit of scripture and saying that he has ‘petitioned the courts of heaven’ to steal the man’s youth as punishment.

Cringe:  A Twitter user has shared a lengthy letter that a father wrote to his adult daughter’s ex-boyfriend, whom she broke up with a decade ago 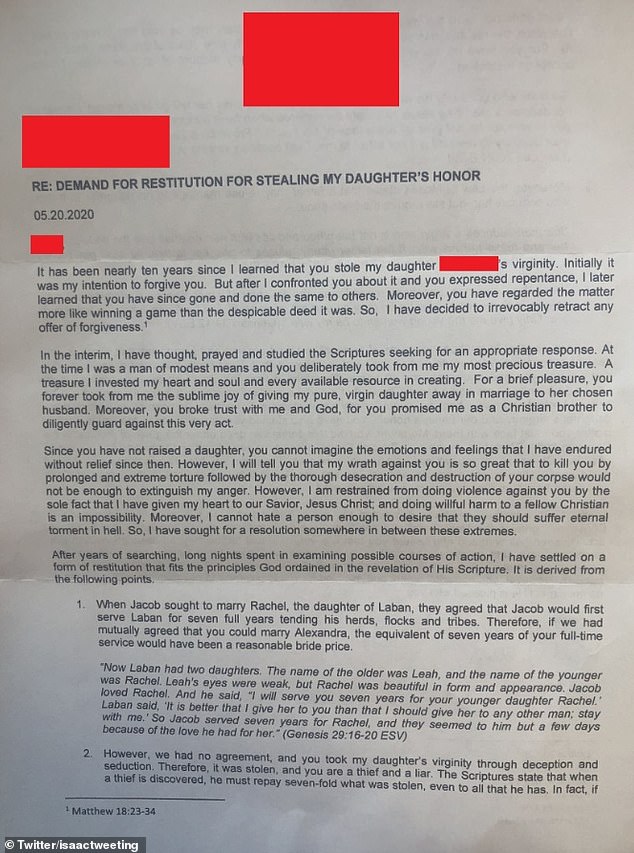 Yuck: The father harangues him for ‘stealing her virginity,’ complaining that he was denied the ‘sublime joy of giving my pure, virgin daughter away in marriage to her chosen husband’

The bizarre, eyebrow-raising letter is now being pored over by the masses, after Dallas-based Twitter user Isaac N. shared photos of it late last week.

‘One of my best and oldest friends broke up with his high school girlfriend over a decade ago,’ Isaac explained. ‘Today, his wife of 7 years found this absolute ornament in their mailbox.’

He included photos of both pages of the letter, redacting the names of those involved.

‘It has been nearly ten years since I learned that you stole my daughter [name redacted]’s virginity,’ the irate father wrote.

‘Initially it was my intention to forgive you. But after I confronted you about it and you expressed repentance, I later learned that you have since gone and done the same to others.

‘Moreover, you have regarded the matter more like winning a game than the despicable deed it was. So, I have decided to irrevocably retract any offer of forgiveness.’

The father wrote that he has spent all the time since praying and studying the scriptures, deciding what to do.

‘At the time I was a man of modest means and you deliberately took from me my most precious treasure,’ the father went on, calling his daughter’s virginity ‘a treasure I invested my heart and soul and every available resource in creating.

‘For a brief pleasure, you forever took from me the sublime joy of giving my pure, virgin daughter away in marriage to her chosen husband,’ he wrote.

‘Moreover, you broke trust with me and God, for you promised me as a Christian brother to diligently guard against this very act.

‘Since you have not raised a daughter, you cannot imagine the emotions and feelings that I have endured without relief since then. However, I will tell you that my wrath against you is so great that to kill you by prolonged and extreme torture followed by the thorough desecration and destruction of your corpse would not be enough to extinguish my anger.

‘However, I am restrained from doing violence against you by the sole fact that I have given my heart to our Savior, Jesus Christ; and doing willful harm to a fellow Christian is an impossibility. Moreover, I cannot hate a person enough to desire that they should suffer eternal torment in hell. So, I have sought for a resolution somewhere in between these extremes.

‘After years of searching, long nights spent in examining possible courses of action, I have settled on a form of restitution that fits the principles God ordained in the revelation of His Scripture,’ he said.

Turning to the bible, he referenced Jacob’s marriage to Rachel, noting that Jacob served Rachel’s father for seven years before marrying her.

‘However, we had no agreement, and you took my daughter’s virginity through deception and seduction,’ he wrote. ‘Therefore, it was stolen, and you are a thief and a liar.’

According to the bible, he said, thieves must ‘repay seven-fold what was stolen’ — so the father figures that since seven years of servitude to him were stolen, the ex-boyfriend must repay 49 years of the ‘prime of his life’.

Even more shockingly, the father compared the ex-boyfriend’s presumably consensual sex with his daughter to the rape of Dinah in the bible.

‘So, I have decided to petition the courts of heaven to take from you and give to me that which is your dearest possession: your youth and all the good that goes with it,’ he wrote. ‘Specifically I demand divine restitution that will age you and rejuvenate me 49 years. 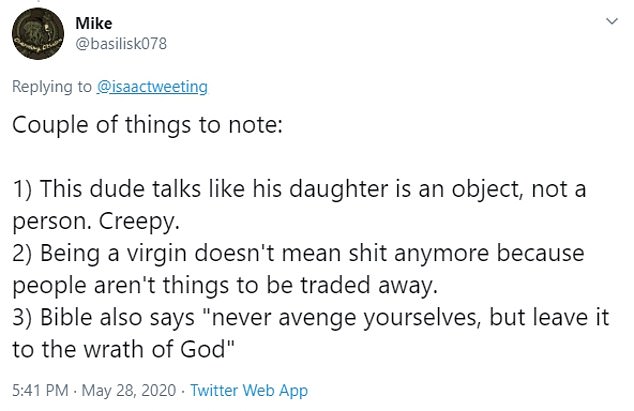 Yikes! On Twitter, the letter has quickly gone viral, with replies ranging from angry and horrified to mocking and amused

‘Therefore, if from this date you discover that you have aged significantly or are aging rapidly, know that it is not a medical condition. It is the judgement of God,’ he said.

He continued to lecture him for acting against God and Jesus, sermonizing against fornication and saying he will be condemned to ‘eternal torment in hell.’

‘I have actually seen hell firsthand and assure you that it is very real and terrible beyond description,’ the father wrote.

‘With this restitution, your debt to me will be paid. I do not know how many other parents you have similarly swindled and robbed, but that is also another matter and how you will reconcile with them is your concern. However, you must still repent and ask God for His forgiveness to have any hope of salvation. I do not expect He is pleased with you.’

On Twitter, the letter has quickly gone viral, with replies ranging from angry and horrified to mocking and amused.

Gross: While some commenters are disgusted by the father laying ownership to the the use of his daughter’s genitals, others have found humor in the bizarre situation

‘I get that a lot of people have been using quarantine to be more productive or learn new skills, but if you find yourself attempting to place a hex on people who made you mad a decade ago, maybe productivity isn’t for you and you should just watch Netflix,’ wrote one.

‘I’m particularly alarmed that your friend’s Christianity is the deciding factor which keeps this gentleman from straight-up murdering him,’ said another.

‘It’s hard not to feel bad for the author. He’s mourning the loss of something that was never his from the most common activity in the history of humanity. He was always going to lose.’ said a third.

‘I’m curious about the “resources” he put into cultivating her virginity. I’m pretty sure it was that 20 seconds of joy during the act which led to her conception however many years ago, but I’m fascinated if there was anything else.,’ yet another tweeted.

‘Imagine spending ten years just thinking about your daughter getting doinked in the back of a Honda Civic,’ one man retorted.

Doesn’t agree with dad: The daughter wanted to ‘set the record straight’: ‘She, in fact, broke up with him’ 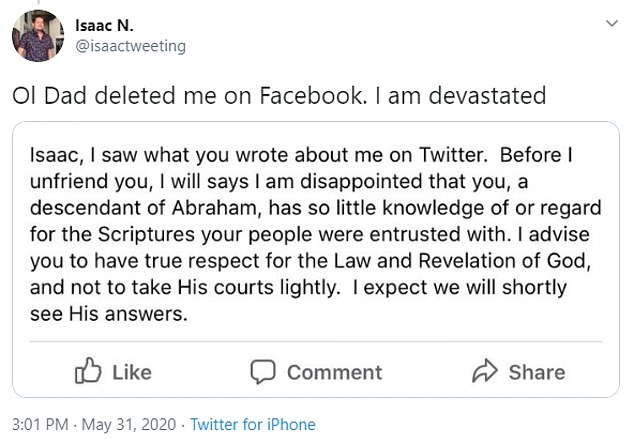 Digging his heels in: The father unfriended Isaac on Facebook and expressed disappointment with Isaac’s disregard for the bible

One commenter, who identified himself as a Christian father, took issue with several aspects of the other dad’s letter.

‘1) this is insane,’ he wrote. ‘2) my daughter has agency, 3) even if my daughter makes mistakes she is still worthy of my love, 4) Salvation is not earned but through belief, 5) this youth stealing thing is…insane.’

A consequence of Isaac’s tweet going viral was that, before long, both the father who wrote the original letter and his daughter caught wind of it and responded to him.

The father unfriended Isaac on Facebook and expressed disappointment with Isaac’s disregard for the bible.

Meanwhile, his daughter wanted to ‘set the record straight’: ‘She, in fact, broke up with him.’

Another commenter who appears to know all involved added that ‘she is doing just fine and isn’t close to her father.’