Each week, Benjamin Law asks public figures to discuss the subjects we're told to keep private by getting them to roll a die. The numbers they land on are the topics they're given.

This week he talks to Kate Mulvany. The 42-year-old actor and playwright has won film and theatre awards for roles including Richard III, and for her stage adaptation of Ruth Park's The Harp in the South trilogy.

What was your understanding of death as a child?

I had a lot of death around me. I was born with cancer, so I spent most of my childhood in an oncology ward where sometimes my friends didn't wake up. [Mulvany was diagnosed with a Wilms' tumour at age two.] I connected death to that ward. My best friend in hospital was in the bed next to me, a great chick who was, like, nine. 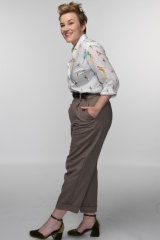 “I’ve only just started saying, ‘I have a disability’ in the past few years.”Credit:Peter Braig

Kids who have cancer get a wisdom about them very quickly. They're savvy; they're funny; they're dry; they're dark. Rebecca was that. When Rebecca didn't come back, I asked my mum, "Where is she?" And Mum told me, "These were Rebecca's words: she said to her mum, 'Mum, I'm going to have a really, really big sleep now.'"

How do you think of death as an adult?

In the past 18 months, I've watched my beloved dad die a protracted death of oesophageal cancer. It's so much more than going to have a big sleep. I wish it were that simple. At the moment, I'm sitting in the glow of "I'm so lucky I had that man as my dad". I scored with my dad.

I'm not religious in any way, but I do look for signs of him. I do the same with my partner Mark [actor Mark Priestley], who took his own life [in 2008]. There are still moments every day where a song will come on or I'll speak to him. That's where I've got to: speaking to them. They're still here.

How do you want to be farewelled?

Just a party with lots of wine. And if I knew I was going to go, I'd write a lot of letters to a lot of people … so I could have the last word. [Laughs]

Tell me about your most significant scar.

I have had a proud scar across my tummy since I was three, from a radical nephrectomy where I had my kidney, adrenal gland and a couple of ribs removed. But I also have a new one. [Shows surgical scar on neck]

Wow, how long is that?

About six centimetres, I think.

Well, I was going to say "crease".

The surgeon deliberately did that. It was actually a bit higher – the growth – but he said, "I'll go low and I'll pull it out." It was a branchial cyst. It's when your body – this is layman's terms – thinks it's a fish.

Your body thinks you're a fish?!

We've all got gills when we're conceived, but mine retained a gill. So this is a gill that had blown up and filled with all kinds of gunky fluid.

Yes. Or that thing from the film The Shape of Water.

Great, I'll feed you some eggs! Is this common?

Apparently it's pretty common, but not common at my age. Normally it's found when you're young. Two days after the show at Belvoir closed, I had it removed: a two-by-three-by-four-centimetre lump.

Great. My moods are better, I'm sleeping better, I'm breathing better now I'm not living with this lump. But I also live with chronic pain because of my spinal disorder from the radiotherapy I had when I had cancer. When you live with chronic pain, there are never any good days, necessarily. Yet there are good moments when I'll just stop and say to my husband Hamish [actor Hamish Michael], "I'm pain-free … right now." It'll last about a minute. There are days where I can't walk; I have to crawl.

Chronic pain is an often invisible disability. Do other people find it hard to understand its severity?

Yes. I've only just started saying, "I have a disability" in the past few years. My friend Kiruna Stamell was over for a cup of tea and she said to me, "Mulvs, you do know you've got a disability. You live with a condition that doesn't allow you to live an able life. You live with chronic pain. Your body can't do certain things. It's getting worse. You're living with a disability." It was a relief.

It was a relief? Some people might be defensive.

No, it was something I'd known, but I didn't know I was allowed to say it. But I'm getting very good now at saying, "This is happening; I can't come in today. I'll be working from home."

What's your least favourite part of your body?

My fingernails. I bite them and it's just a self-inflicted horror.

My scars. I love my scars.

I'm an agnostic. I was brought up very Roman Catholic but to be honest I couldn't stand those fairy tales. I knew better fairy tales than that. Give me Hans Christian Andersen and Grimm's tales and Enid Blyton.

You don't have religion in your life, so where do you find community?

My family. The community I grew up with in Geraldton in Western Australia, an incredibly multicultural place. My dad's Vietnam veteran community, which I'm in contact with on a weekly basis. And the arts community.

What will happen after you die?

I'll just become stardust and maybe meet up with everyone else. Rebecca. Dad. Mark. Everyone.

Kate Mulvany stars in Every Brilliant Thing at Belvoir, Sydney, until March 31, and in Lambs of God on Foxtel.

To read more from Good Weekend magazine, visit our page at The Sydney Morning Herald, The Age and Brisbane Times.