Labor wants to end the “digital workhouse” approach to people trying to get government payments, with new minister Bill Shorten planning to turn using myGov from an often-frustrating experience into a seamless one.

Shorten is taking briefings on his new government services portfolio but wants to get moving immediately on a user service audit of myGov, the online entry portal into services such as Centrelink, Medicare and the Australian Taxation Office. 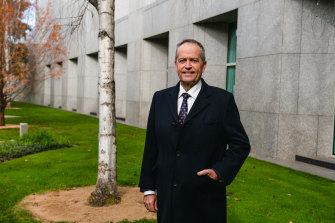 His ultimate aim is to make it “a much more seamless exercise” that doesn’t force people to spend hours of their own time applying for payments or updating details, the new minister said in an exclusive interview.

“They’ve created digital workhouses, basically. You know, workhouses were a 19th century place where the kind-hearted burghers of Victorian England and Australia said, ‘Well, if we’ve got to pay you for three meals a day, you can go and work in a workhouse,’” he said.

“And I think that we’ve used, in some cases, digital technology to create two classes of Australians.

“We haven’t privatised the service. We just privatise your time. You spend hours on it. I’m amazed there’s not more rage out there.”

The minister’s most recent interaction with myGov was downloading his digital vaccination certificate.

“Listen, I’ve got three degrees, I found it a little perplexing,” he said. “Maybe my 12-year-old could have done it better.”

Services Australia is effectively the delivery shop for a huge range of other portfolio areas, administering payments for everything from childcare subsidies and Medicare rebates to disaster relief and paid parental leave, along with the more traditional welfare payments such as pensions and JobSeeker.

Many of these will be involved in the policies the new government campaigned on, and for which it is seeking to swiftly change arrangements.

The agency pays out more than $230 billion a year to people across more than 470 million claims. During the pandemic it also dealt with all the claims for emergency payments, which led it to temporarily add an extra 2000 staff.

However, it has come under pressure in recent years for increasingly forcing people online to make those claims, with nearly 30 Centrelink or Services Australia shopfronts closing around the country, leaving 318 dedicated outlets. Shorten has previously said people seeking support and services must have the option to speak with real people, not merely be pushed onto a website or sit in an automated phone queue.

Another top priority for Shorten in his new role is launching a royal commission into robodebt as soon as possible.

The robodebt scheme, which was subsequently ruled unlawful, used an automated system that measured a person’s average income to claim hundreds of millions of dollars in alleged debts from 433,000 Centrelink recipients. The government settled a class action in 2020 for a total cost of more than $1.8 billion.

Despite the legal action and multiple inquiries, Shorten said it still wasn’t clear who ultimately was responsible for the scheme.

He also wants the royal commission to provide wider lessons for government about the use of algorithms and automation in deciding payments, including those in the National Disability Insurance Scheme.