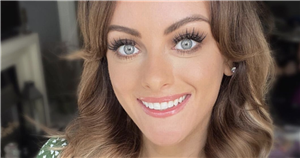 Katie McGlynn first made waves on our television screens as troublesome Jodie ‘Scout’ Allen on BBC’s Waterloo Road from 2011 to 2013.

Since then, the Rochdale-born 28 year old went onto play Sinead Tinker in Coronation Street. Perhaps her best-known role to date and the role saw her being a series regular from 2013 to 2020.

Tackling one of the biggest soap storylines of the year, her character was part of a cervical cancer storyline that saw Sinead battle with the terminal illness and unfortunately pass away.

Katie has since been applauded for bringing awareness to a harrowing topic but ultimately left the soap in 2020, stating that she wanted her character to die. She explained: “Life isn’t a fairytale, people are dying.”

She is now starring as Becky Quentin on Channel 4’s Hollyoaks while simultaneously being part of the new cohort of dancers in this year’s Strictly Come Dancing.

But is there a partner eagerly cheering her on behind the scenes? We explore her love life here…

In 2017, it was rumoured that the actress was linked to Strictly pro Giovanni Pernice but an official relationship between the two was never announced.

The charismatic Italian dancer was linked to Katie five years ago after dating Katie’s Coronation Street co-star and his former Strictly partner, Georgia May Foote.

In 2018, Giovanni also dated his former dance partner Ashley Roberts. He is currently in a relationship with Maura Higgins.

Katie and Giovanni were romantically linked after being spotted looking cosy and close at an awards party. However, Katie insists nothing happened.

The rumoured romance was seen as an enticing choice for partnering in this year’s series but BBC producers decided against it.

From 2017 to 2020, Katie had a relationship with a salesman named Benjamin Roberts.

A source has previously said: “Katie and Benji were really smitten when they first met and enjoyed a bit of a whirlwind romance to start with. Things just started to fizzle out towards the end of last year and they made the mutual decision to split.”

As for dating, it doesn’t appear that Katie is currently seeing anyone at the moment.

Preferring the male company of her best friend Lee Bennett, he is her regular date to work events and the two enjoy sunny getaways together.

She has previously spoken of her desire to move to LA and “break Hollywood” so it is unlikely that a partner fits into her busy schedule at the moment.

The glamourous actress is currently starring in Hollyoaks and between that and her rigorous dance rehearsals, it doesn’t look like she has much time to entertain a romance.