As French President Emmanuel Macron is accused of plotting to stop Brexit, DOMINIC SANDBROOK says it’s time to cut this Napoleon down to size

Many years ago, when I was working as a classroom assistant in a French high school, one of the teachers invited me round for dinner.

After a typically lavish Gallic feast, we were polishing off the last of the Côtes du Rhône when the conversation turned to the thorny history of Anglo-French relations.

‘We’ll never forgive you, you know,’ he said abruptly, gazing moodily into his glass. ‘For what?’ I asked. ‘For the Second World War,’ he said. ‘Winning it, I mean.’

I often think about that conversation these days. For although France’s political and cultural elite are always the first to boast about how they have buried the grudges of history and banished the hatreds of the world wars, their recent actions tell a different story.

There have been two prize examples in the past few days. One came from France’s Minister for European Affairs, Nathalie Loiseau, who told a French radio station that she would rather see Britain crash out of the EU without a deal than accept a compromise that might undermine her beloved single market.

The other came from the organ grinder himself, Emmanuel Macron, who recently told the United Nations that the EU would gladly welcome Britain back if we corrected our historic mistake in a second referendum. 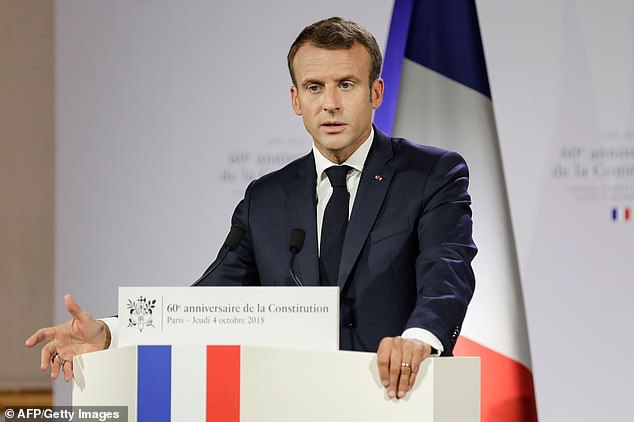 Indeed, according to yesterday’s Times, Theresa May has warned the Cabinet that Mr Macron believes Brexit can be reversed — and is hoping that, by blocking a deal, he can blackmail her into approving a second referendum.

This is, of course, a familiar Macron theme. Barely a month passes without him delivering another lecture about the shameful insolence of our vote to leave the EU.

The Leave victory, he said recently, was won by ‘liars’ who ‘left the next day so they didn’t have to manage it’. Actually, the only person who left the next day was David Cameron, who had campaigned for Remain. So Mr Macron was not quite as clever as he thought.

Even so, in its haughtiness, condescension, ignorance and arrogance, Mr Macron’s rebuke shows why he has become a shining example of everything ordinary Britons loathe in the European political elite.

Any sensible person would tell him that his threats were bound to put British people’s backs up. Indeed, if there were a second referendum I would be tempted to vote Leave purely to express my fury at being lectured by this Parisian pygmy — even though I voted Remain the first time.

But Mr Macron’s real audience was not here in Britain. Like so many of his predecessors in the Elysée Palace, he was pandering to the jealousy, resentment and fear with which so many French men and women peer anxiously across the Channel.

Perhaps that sounds a bit strong. But as the Cambridge historian Robert Tombs wrote a few years ago in his superb history of Anglo-French relations, That Sweet Enemy, many of our Gallic neighbours have never really forgiven us for Agincourt and Waterloo, let alone for our effrontery in standing up to Hitler in 1940 while they ignominiously crumbled and collaborated.

That most pompous of all French presidents, Charles de Gaulle, never forgave us for saving his country during World War II. 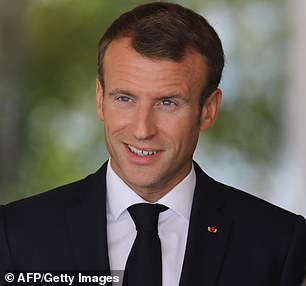 Like so many of his predecessors in the Elysée Palace, Macron was pandering to the jealous

Painfully conscious of the cowardice and incompetence that had disfigured his own country’s war effort, he tried to get his revenge by vetoing our first applications to join the Common Market in 1963 and 1967.

De Gaulle’s successors have invariably tried to copy his example. When Margaret Thatcher tried to win a rebate on Britain’s scandalously excessive contributions to the EU budget in the early 1980s, for example, Valéry Giscard d’Estaing tried to block her at every turn.

At one summit, Giscard d’Estaing even started reading the newspaper while she was talking. At least Mr Macron has not yet done that to Mrs May, although given the turgid pretentiousness of his country’s newspapers, perhaps that is not surprising.Other recent presidents have continued the same pattern.

When the financial crisis broke in 2008, the first reaction of Nicolas Sarkozy, a moral and political dwarf now facing charges of bribery and corruption, was to blame it on ‘Anglo-Saxon capitalism’ and demand action against the City of London.

Similarly, no sooner had Britain voted to leave the EU in 2016 than the risibly flaccid Fran- çois Hollande insisted that ‘there must be a threat, there must be a risk, there must be a price’, and that Britain must face serious ‘economic and human consequences’.

As for Mr Macron, when he was elected in May 2017 he pretended to be an entirely new kind of president. But if you got a computer to design a classic over-privileged Gallic politician, the result would look just like him.

From his unusual marital history to his pretensions of grandeur, he conforms absolutely to type.

He went to the elite École Nationale d’Administration, which educated three other French presidents, seven prime ministers and about half of all recent Cabinet ministers.

He became Minister of Finance without standing in a single election. Then he set up his own political party, En Marche, its initials borrowed from his own

name. Can you imagine a British politician doing that?

Like his unlamented predecessors, Mr Macron came to power promising tough reforms but has utterly failed to deliver. He

parades around like a conquering hero and harangued a teenager who failed to call him ‘Mr President’. Yet he looks more and more like a teenager himself, struggling to cope with a grown man’s job.

His administration is in chaos, with his experienced interior minister walking out on Wednesday in protest at his hubris. His approval rating stands at a pathetic 23 per cent, lower than Theresa May’s. And so Mr Macron has fallen back on the oldest French trick of all: bashing the British.

As for his recent attempts to blackmail us into a second referendum, I think we should see them for what they are: a reflection of his underlying weakness.

To Mr Macron, as to so many of his compatriots, Brexit poses a huge existential challenge. It would be humiliating for France, for so long our greatest rival, if we made a success of our independence outside the EU while they ploughed joylessly on towards ever-closer union with the titans of Luxembourg, Cyprus, Malta and Romania.

No wonder he never ceases to decry our decision to leave, spent the Salzburg summit trying to intimidate Mrs May into surrender, and even now seems determined to exact such a high penalty that he forces the British people to think again.

But if Mr Macron seriously thinks he can blackmail us into falling into line, he is an even bigger fool than he looks. For if he knew anything about history — and since he is French, I can readily understand why he would prefer to forget it — he would know that nothing infuriates the British people more than a foreigner telling them what to do.

And since Mr Macron clearly models himself on Napoleon, hosting Mrs May this summer at the emperor’s old haunt of Fort de Brégançon, an island retreat off the Mediterranean coast, he should remember what became of his hero.

Napoleon, too, thought he could bully Britain into surrender. He drew up his forces along the coast, struck a medal to commemorate the invasion and even ordered a triumphal arch to be built in readiness.

And what happened to him? We beat him at Trafalgar, then at Waterloo. He ended up a prisoner on the island of St Helena, his empire smashed, his pretentions shattered, his country humiliated in the eyes of the world.

So Mr Macron should be warned. Let him block a deal if he likes, though the consequences would surely be disastrous for his own economy, with its woefully undercapitalised banks and crippling youth unemployment rate.

Let him strut and swagger. Let him enjoy his time in the limelight. It won’t last long.

Britain can take it. After all, we have taken it before — and worse. And if there is one thing guaranteed to unite us, it is that we will never, ever give in to a foreign bully.