Don’t get why women are mad about Kavanaugh? Read this.

An American man has taken a stab at explaining to confused and doubtful men just why so many women are so angry and upset in the wake of Judge Brett Kavanaugh’s confirmation.

Writer A.R. Moxon took to Twitter last week to lay out a detailed analogy, hoping to illustrate to other men what it feels like to be a woman in the current climate.

In a series of tweets that have resonated with thousands, Moxon compares rape culture and the female plight to a world in which men frequently have to fear a real threat of being kicked in the testicles — and have little recourse to stop it. 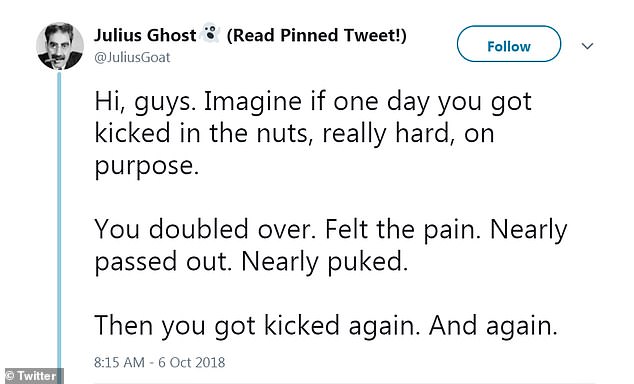 Thread: A man took to Twitter last week to lay out a detailed analogy in which he compared rape culture to a society in which men were threatened with kicks to the testicles 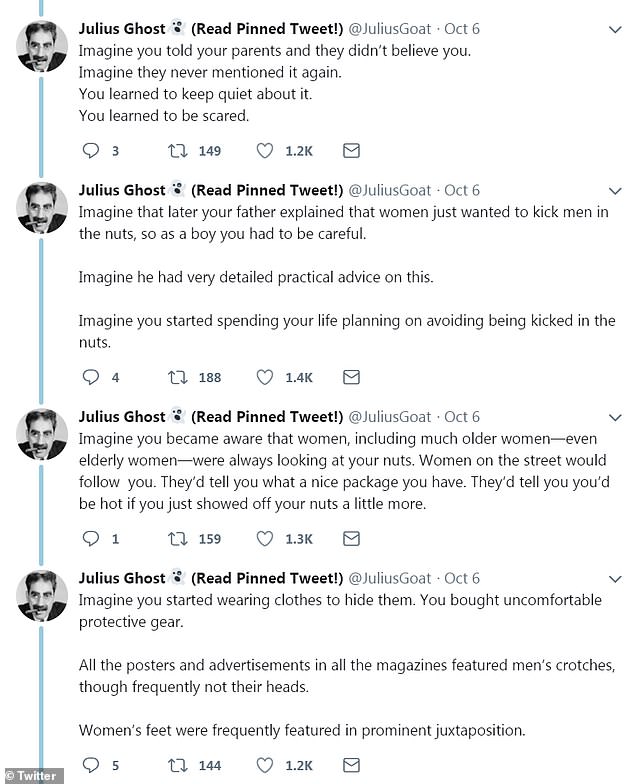 Purpose: He wanted to explain to men why so many women are so angry and upset in the wake of Judge Brett Kavanaugh’s confirmation

‘Hi, guys,’ he began. ‘Imagine if one day you got kicked in the nuts, really hard, on purpose. You doubled over. Felt the pain. Nearly passed out. Nearly puked. Then you got kicked again. And again. 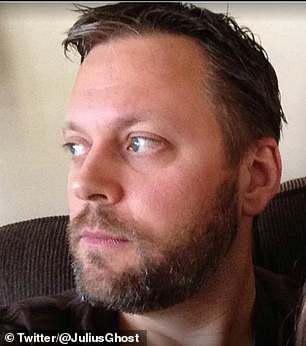 Attention: US writer A.R. Moxon has gone viral for the thread

‘Imagine that later your father explained that women just wanted to kick men in the nuts, so as a boy you had to be careful,’ he urged. ‘Imagine he had very detailed practical advice on this.

‘Imagine you started spending your life planning on avoiding being kicked in the nuts.

‘Imagine you became aware that women, including much older women — even elderly women — were always looking at your nuts. Women on the street would follow you. They’d tell you what a nice package you have. They’d tell you you’d be hot if you just showed off your nuts a little more.

‘Imagine you started wearing clothes to hide them. You bought uncomfortable protective gear. 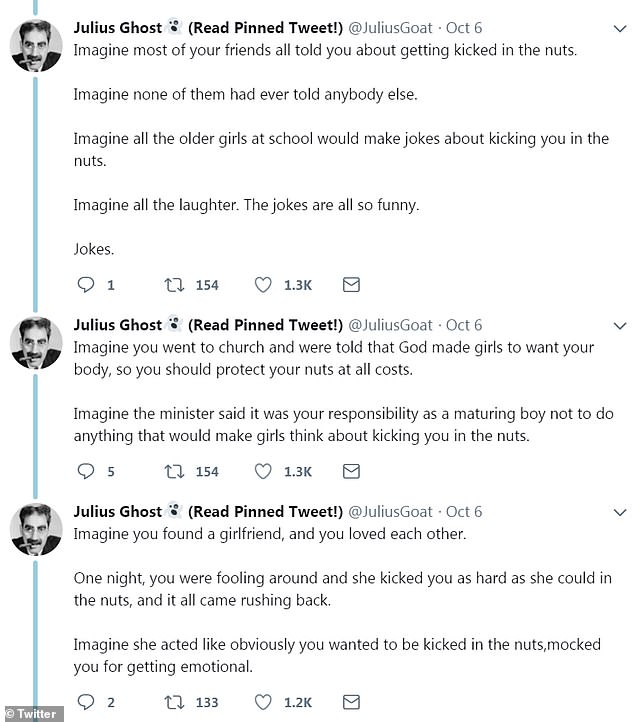 Reversed: In the world he painted, men learn to fear getting kicked in the testicles by women from a young age, and develop tactics to protect themselves 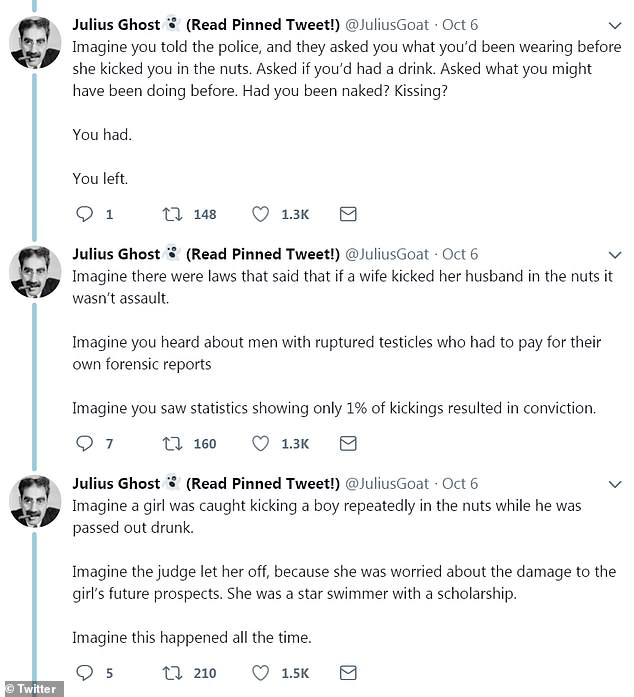 Similarities: He paints detailed examples of men being kicked by women they trust, and of women who kick men being let off by judges

‘All the posters and advertisements in all the magazines featured men’s crotches, though frequently not their heads. Women’s feet were frequently featured in prominent juxtaposition.

‘Imagine most of your friends all told you about getting kicked in the nuts. Imagine none of them had ever told anybody else. 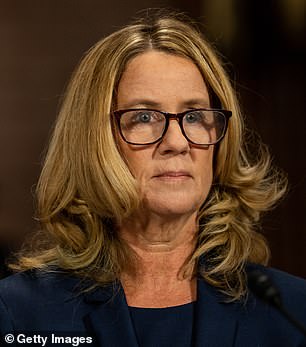 He wrote: ‘I can’t imagine women’s rage today, but this exercise, while abstract, helped me get nearer to it than I’d been’

‘Imagine you went to church and were told that God made girls to want your body, so you should protect your nuts at all costs.

‘Imagine the minister said it was your responsibility as a maturing boy not to do anything that would make girls think about kicking you in the nuts.

‘Imagine you found a girlfriend, and you loved each other. One night, you were fooling around and she kicked you as hard as she could in the nuts, and it all came rushing back.

‘Imagine she acted like obviously you wanted to be kicked in the nuts, mocked you for getting emotional.

‘Imagine you told the police, and they asked you what you’d been wearing before she kicked you in the nuts. Asked if you’d had a drink. Asked what you might have been doing before. 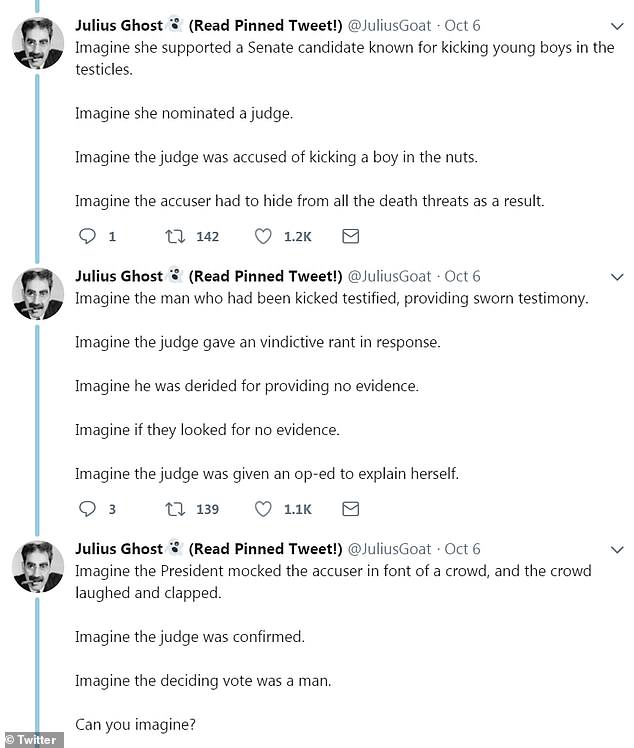 Swapped: His version had a female accused of kicking testicles confirmed for the Supreme Court

‘Had you been naked? Kissing? You had. You left.

‘Imagine there were laws that said that if a wife kicked her husband in the nuts it wasn’t assault.

‘Imagine you heard about men with ruptured testicles who had to pay for their own forensic reports.

‘Imagine you saw statistics showing only 1% of kickings resulted in conviction.

‘Imagine a girl was caught kicking a boy repeatedly in the nuts while he was passed out drunk. Imagine the judge let her off, because she was worried about the damage to the girl’s future prospects.

‘She was a star swimmer with a scholarship. Imagine this happened all the time.

‘Imagine if one day men all started talking about how almost all of them had, at one point or another, been kicked in the nuts.

‘Imagine if women’s main concern was what false accusation might do to their reputations, and whether this new honesty might ruin the mystery of sex.

‘Imagine a woman ran for President. Imagine audio came out of her bragging about making it a regular practice to kick men in the nuts without even introducing herself. 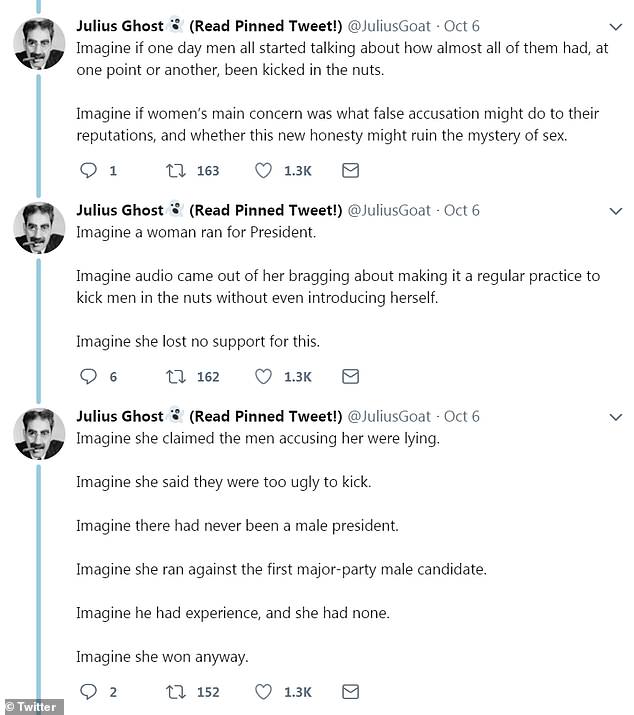 Sounds familiar: In this alternate reality, it’s a female president who gets elected despite being recorded bragging about kicking men in the testicles 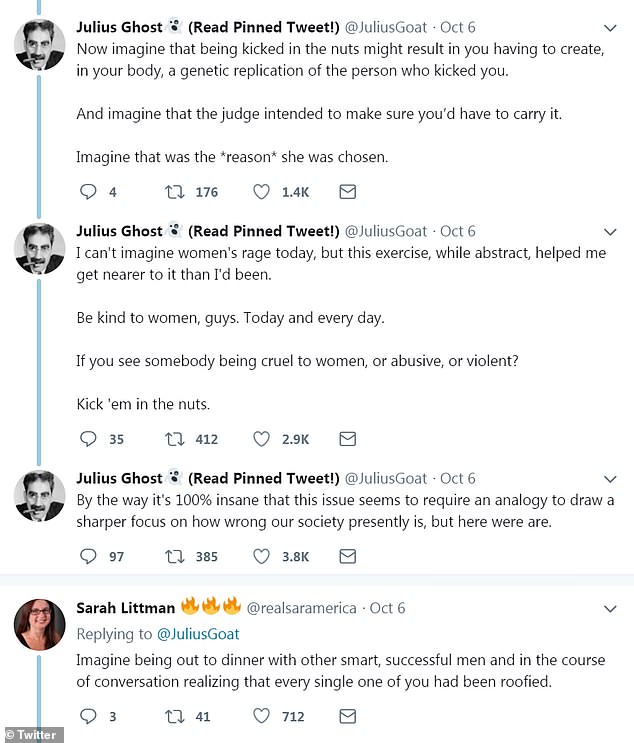 Conclusion: ‘By the way,’ he added, ‘it’s 100% insane that this issue seems to require an analogy to draw a sharper focus on how wrong our society presently is, but here were are’

‘Imagine there had never been a male president. Imagine she ran against the first major-party male candidate.

‘Imagine he had experience, and she had none. Imagine she won anyway.

‘Imagine she supported a Senate candidate known for kicking young boys in the testicles.

‘Imagine she nominated a judge. Imagine the judge was accused of kicking a boy in the nuts. Imagine the accuser had to hide from all the death threats as a result.

‘Imagine the man who had been kicked testified, providing sworn testimony. Imagine the judge gave an vindictive rant in response.

‘Imagine the President mocked the accuser in font of a crowd, and the crowd laughed and clapped.

‘Imagine the judge was confirmed. Imagine the deciding vote was a man. Can you imagine?

‘Now imagine that being kicked in the nuts might result in you having to create, in your body, a genetic replication of the person who kicked you.

Relate: Other Twitter users chimed in with their own stories and examples 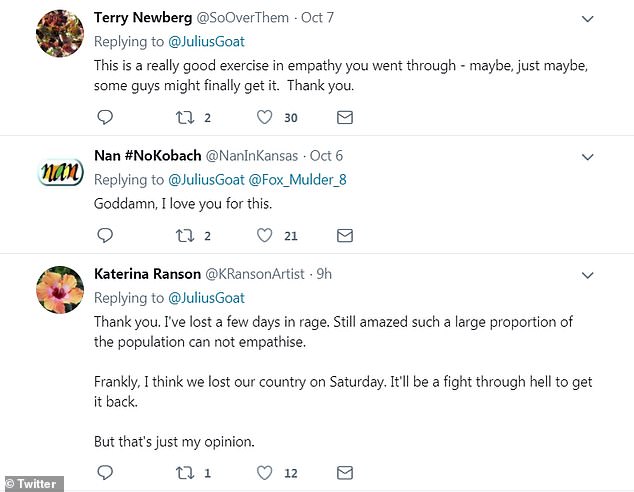 Love: Both men and women applauded him, calling his thread ‘genius,’ ‘so powerful,’ and ‘a fantastic exercise’

‘And imagine that the judge intended to make sure you’d have to carry it. Imagine that was the *reason* she was chosen.

‘I can’t imagine women’s rage today, but this exercise, while abstract, helped me get nearer to it than I’d been. 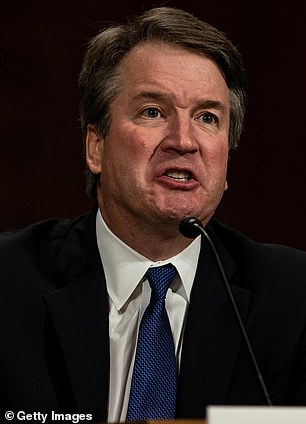 Read carefully: He painted a picture of a world in which men and women were reversed to help men understand the thinking of women who are upset about Kavanaugh

‘Be kind to women, guys. Today and every day. If you see somebody being cruel to women, or abusive, or violent? Kick ’em in the nuts,’ he wrote.

‘By the way it’s 100% insane that this issue seems to require an analogy to draw a sharper focus on how wrong our society presently is, but here were are,’ he concluded.

Moxon shared the thread on October 6, and since then it’s earned thousands of likes. It’s also garnered replies from women who have shared their own stories of sexual assault and rape.

‘Imagine being out to dinner with other smart, successful men and in the course of conversation realizing that every single one of you had been roofied,’ tweeted one woman.

Tweeted another: ‘Imagine women crying into their beer about how afraid they are of someone accusing them of but-kicking and how you should realize THEY are the REAL victims.’

Others, both male and female, replied to applaud Moxon, calling his thread ‘genius,’ ‘so powerful,’ and ‘a fantastic exercise.’

‘You were right on with your excellent analogy. You were able to describe the female experience in terms men might be able to empathize with. Thank you,’ wrote one.