Ed Sheeran, Jimmy Barnes and Kylie Minogue will lead a musical tribute to industry legend Michael Gudinski at a state funeral to be held in Melbourne tonight.

The doors of Rod Laver Arena, a regular venue for the international touring acts Gudinski brought to the country over decades in the business, will open at 5.30pm ahead of a service due to begin at 7.07pm.

That unusual time was selected in honour of Gudinski’s favourite tipple, Penfold’s Bin 707, a high-end cabernet that typically retails for more than $500 a bottle.

It is just one of the insider references dotting the service, which has been pulled together by the Mushroom staff Gudinski referred to as his family in the weeks since his shock death, at age 68, at home on March 2. 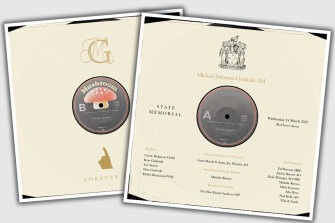 The order of service for the memorial for Michael Gudinski.

Sheeran initially responded to the news of Gudinski’s death on Instagram with a photo of the pair on a beach at sunset, and the simple words “I’ll miss you mate”.

But the true strength of the bond between Sheeran and the man he described in a later Instagram post as “a tornado of joy” was evident in the fact the English singer flew to Australia and spent two weeks in quarantine in the Hawkesbury River area – from which he had to be evacuated this week due to flooding – in order to be able to perform at Wednesday night’s service.

There was never really any doubt that Gudinski, a Melburnian by birth, would be granted a state funeral by Victoria.

Premier Dan Andrews was a close friend of the co-founder of Mushroom Records and chief executive of the sprawling Mushroom Group of companies it spawned. During the long COVID-induced shutdown that took a wrecking ball to the live music industry in the state last year, they became partners in a raft of measures designed to offer some measure of work and income to musicians and others in the sector. 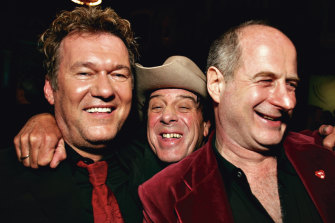 But the back injury sustained in a serious fall at a holiday house in Portsea recently meant the Premier is not expected to be there in person; his message of thanks for all Gudinski did for the city, the state and Australian music in general is expected to be delivered via video from home, where he is convalescing.

Jimmy Barnes was another whose relationship with Gudinski straddled the divide between personal and professional. Their bond, forged over years of touring, was deep. On the day news of his death broke, Barnes – whose battles with alcohol, drugs and his own psychological demons are no secret – wrote that Gudinski “stood with me through my darkest moments and my most joyous days. Michael was the rock I reached for when life tried to wash me away.”

In tribute on Wednesday night, the singer is set to debut a new song, called Flesh and Blood. It had been on high rotation in Gudinski’s house in the days before his death. The lines “My flesh and blood they’re not on their own/Because I’m walking right beside them all the way/I won’t let them stray” are directed at Barnes’ kids, but they might just as well have been written about the relationship between rocker and promoter.

Gudinski would have been delighted to note that the evening’s bill included, alongside legends of Australian rock including Mark Seymour, Paul Kelly and Vika & Linda, recent discovery Mia Wray.

“He was very forward looking all the time, always excited about the new thing,” said Eleven Music boss and former colleague John Watson recently. “He couldn’t shut up about Mia Wray and he was as excited about her as he would have been about a Bruce Springsteen tour”.

Other speakers at the ceremony, which will be held in front of a crowd of 7200 invited guests and streamed live on the web, include Carrie Bickmore, Gudinski’s son Matt, executive director of the Mushroom Group, and daughter Kate and radio presenter Lee Simon, who hosted the late-night rock program Nightmoves on Seven between 1977 and 1984. Gudinski was the show’s producer.

The evening’s proceedings were marked out on a program in the shape of a 7-inch single, featuring the catalogue number K-5558, and the legend “Australian recording, 1972 Mushroom Records”.

The date commemorated the year the label was founded by Gudinski and business partner Ray Evans, but that catalogue number was another insider reference. It actually belongs to a track from 1974 called Buster Brown.

A choogling blues-rock number by the band of the same name, with Angry Anderson on lead vocals and Phil Rudd – who would soon after join AC/DC -– on drums, it features the immortal line: “Don’t know where I’ve been but I sure know where I’m going/Gonna rock and roll all the way to Heaven.”

Chances are Gudinski will be there already, his index finger pointing upwards to signal another number one, and a celebratory glass of 707 in hand.