Babyteeth, an artful drama about a schoolgirl diagnosed with cancer, has swept the Australian Academy of Cinema and Television Arts Awards.

Playwright turned screenwriter Rita Kalnejais also won best screenplay for Babyteeth, adapting her own play which was staged at Belvoir Street Theatre in 2012. 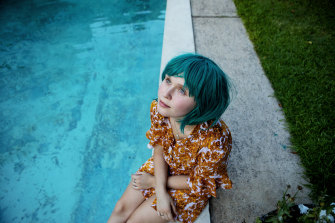 Scanlen, who emerged in the American TV series Sharp Objects and starred in Little Women, played schoolgirl Milla whose cancer diagnosis and how it affects the lives of everyone around her is at the heart of the film.

Wallace, best-known for the TV series Romper Stomper and for playing the young Michael Hutchence in Never Tear Us Apart, played her drug-dealing boyfriend.

It was a role that won him the Marcello Mastroianni Award for best young actor or actress at the Venice Film Festival last year. 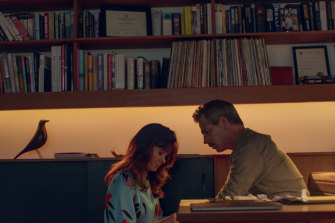 Mendelsohn and Davis played a quirkily mismatched couple, the parents of Milla, in the film which balances delicately on the edge of intense drama and eccentric suburban comedy.

After a surging career in the US that has included The Dark Knight Rises, Rogue One and Captain Marvel, Mendelsohn returned to shoot Babyteeth as his first Australian film for "eight or nine years". 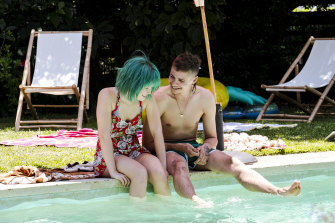 “I love Babyteeth,” Mendelsohn said, in a video from a night shoot in Sicily played at the AACTA Awards ceremony on Monday. “Of all the films I’ve made that I’ve seen, it’s my favourite…Importantly it seems to me to be about people who have flaws – ridiculous flaws, funny flaws – who are desperately trying to contribute and be together in a really difficult circumstance.” 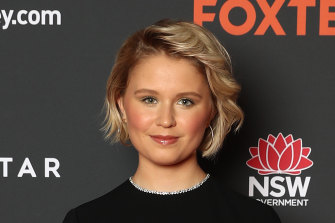 Eliza Scanlen arrives at the AACTA Awards on Monday.Credit:Brendon Thorne/Getty Images for AFI

A decade ago, Mendelsohn won best actor at the Australian Film Institute Awards – predecessor to the AACTAs – for Animal Kingdom.

The awards are being presented at two ceremonies – film in the afternoon and television this evening – at The Star in Sydney today.

In a video speech "from the bush", the academy's new president Russell Crowe urged the federal government to take advantage of a film and television production boom triggered by the containment of the coronavirus pandemic in Australia.

“I want to encourage the federal government to use this time to set a platform so this rise in production can be facilitated to continue,” Crowe said. “Given the right support, the screen industry can be used as a powerful driver for economic recovery.”

Babyteeth received a total of 12 AACTA Award nominations. Justin Kurzel's wild bushranger drama True History of the Kelly Gang was in contention for 10 awards, with John Sheedy's family film H Is For Happiness up for nine. All three were up for best film with horror-thriller and international hit The Invisible Man, Helen Reddy bio-pic I Am Woman and horror pic Relic. Nominations in the television categories were led by ABC series Mystery Road and Stateless, with seven each.

The first awards were handed out on Friday night.

Best Film: Babyteeth, H Is for Happiness, I Am Woman, The Invisible Man, True History of the Kelly Gang, Relic