‘Everybody’s scared’: The first mention in Australian media of global warming could only gesture to the future

It was 50 years ago — August 30, 1971. I was 23, watching US ecologist Paul Ehrlich on the ABC’s Monday Conference, being interviewed by Robert Moore. Ehrlich said the world’s population was 3.7 billion and we were adding 70 million people a year. This was degrading the life support systems of the planet.

The prophet had spoken. At last, I thought, someone has identified the driver of all environmental decline: the explosive growth in human numbers. 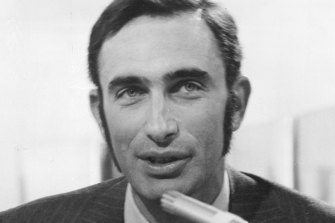 The US biologist Paul Ehrlich during the broadcast of Monday Conference 50 years ago.Credit:SMH

Recently, I consulted the 33-page transcript. I saw a question from the audience I hadn’t noted at the time. An unidentified person asked Ehrlich about a cover story in New Scientist that said the world’s temperature had increased by a degree and, if it rose by 3.5, we would flood most of the earth.

Ehrlich replied he knew this research. “If we continue on the long-range energy course we are on, sooner or later we will melt the polar ice caps.” He said “atmospheric dynamics” were now being studied and “everybody’s scared”.

This exchange was probably the first mention in Australian media of global warming, the phrase itself not yet coined.

Ehrlich was wrong to talk up the threat of world starvation, to overlook the new plant varieties and farm techniques that enabled food to keep pace with population. Critics have made much of this alleged Malthusianism. But 50 years ago a lot was unknown, not just in environmental sciences. Western leaders believed in wage and price controls. China and Russia were locked in dogmatic Marxism. 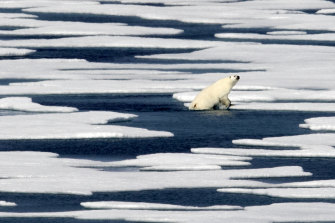 The Arctic is suffering dramatic loss of sea ice. Credit:AP

Ehrlich was right about the biggest thing: the dramatic rise in world population that would lift numbers over 50 years from 3.7 to today’s 7.8 billion. It’s happened, on cue. According to one physicist it explains at least half the warming – it, and the spike in consumption it brought with it, like the rise in vehicle numbers from 200 million to 1.5 billion. Or the doubling in per capita pork consumption. Above all, the doubling in power use.

Since the 1971 story in New Scientist the Arctic sea ice that persists through summer has shrunk by more than a million square miles. This month’s IPCC report said human influence was “very likely” the main driver, as it was with the surface melting of the Greenland ice sheet which began to be evidenced 30 years after the ABC studio discussion.

Nobody in 1971 imagined the world’s oceans acidifying and 8.8 million tons of plastic every year killing off millions of marine animals. Microplastic even in sea life in the Mariana Trench? Inconceivable.

In 1970 mega fires (those devouring more than 100,000 acres) were rare in the US but in the last decade a warmer, drier climate has fuelled dozens. They, like blazes on a Greek island, are a new normal and forgotten as quickly as floods in Germany that caused scientists to parse reference to “hydro meteorological extremes that have become more extreme”. 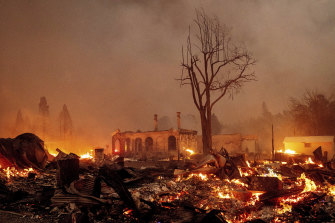 Megafires are the new normal in California.Credit:AP

Ehrlich, 89, lives with his wife, Anne, on the Stanford campus. It’s in northern California, where, between last summer and this, maximum temperatures leapt 5 degrees which may, disturbingly, be a non-linear bump in the warming trajectory.

I rang him and asked whether he ever expected to see such scorching summers fuelling fires that make air in Denver and Salt Lake fouler than Delhi’s. He said, “I was expecting an increase in these events. But the speed of the changes has surprised and frightened me.”

Ever think noxious smoke from fires in California would fill the sky in New York? He visits Australia annually regarding it as second home and was able to riposte, “Not until my experience in Sydney in 2019 – and in California in 2020.”

I asked him about tipping points. “I think we’re well beyond the tipping points on climate disruption – and loss of biodiversity, land use change, over-harvesting, toxifications.”

As someone whose advocacy kick-started much environmental activism he thinks the IPCC report understates things. He says mishandling of the pandemic is a bad signal for responses to climate. “The scariest thing is politicisation of masks and vaccines – people rioting against mandates designed to save the health and lives of themselves and their loved ones.”

What happens, he asks, when we face the necessary changes for climate?

Fifty years ago Ehrlich and his questioner were only able to gesture at a transformation that today dominates diplomacy, forces mammoth energy companies to exit coal and the EU to plan carbon tariffs. Warmer oceans, coral bleaching, huge fires in the Mediterranean and methane pluming from disintegrating permafrost: it’s a changed planet but in 1971 in an ABC studio only just visible as through a glass, darkly.

Bob Carr is a former NSW premier of NSW and Australian foreign minister. He is professor of Business and Climate at UTS.

The Opinion newsletter is a weekly wrap of views that will challenge, champion and inform your own. Sign up here.