Exploration of sexual identity loses its edge in 2019 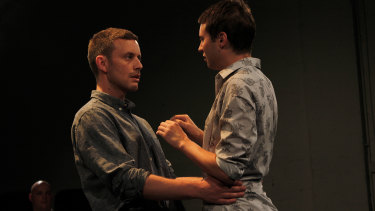 Expressions of sexual orientation and identity have become more fluid and responsive to difference since Mike Bartlett’s Cock appeared a decade ago. So the cultural inflection of the play’s comedy has changed too, and I wonder what in it we’ll be laughing at (if anything) when another decade has gone by.

Cock was written for a world where Cynthia Nixon, aka Miranda from Sex In The City, felt more comfortable coming out as lesbian than as bisexual. (“Everyone hates bisexuals,” she said at the time.) She wasn’t the only one who feared confusion and hostility from the LGBTI+ movement, and its alphabet soup, for floating in the middle of the bowl.

That moment has largely passed, though. It intensified while strict categories were seen to support political action – when bisexuals seemed a challenge to the cultural strength of gay and lesbian civil rights messaging – but the new generation seems unselfconscious, more liberated and much less apt to pigeonhole themselves sexually than those who came before them.

Bartlett’s comedy presents a dilemma unique to bisexuals: falling in love with a man and a woman at the same time. John (Matthew Connell) is in a tempestuous long-term relationship with a man (Shaun Goss), but is sleeping with and becomes infatuated with a woman (Marissa O’Reilly), whom he meets during a brief separation.

John's sexual discovery requires reconciliation, as he faces pressure to decide between lovers over a horrendously awkward dinner attended by this new woman, his long-term partner and his partner’s father (Scott Gooding).

Although the emotions and tensions remain, it’s likely John would just call himself queer or pansexual these days and no one would bat an eyelid. That matters, because the misalignment between cultural expectation and individual sexual identity is central to the play’s sense of incongruity.

Staging it in the round, at least the way director Beng Oh has done here, occludes some labile emotional terrain, and at times hamstrings the comedy. Often you can hear but not see the whole picture, and that militates against intimacy – which is a shame, when the snatches of it you do get unfiltered are compelling to watch.

But it all leads to strained interaction and over-emphatic delivery of humour that should have been submerged in, and established through, character.

The arena-style production does come into its own in the end by presenting sexuality as a gladiatorial blood sport; yet the confusion, the contest and the comedy might have been deepened by giving the audience access to every weaponised gesture in the performances.