The setting: the purpose-built concert arena on the east side of London, designed to house the virtual stage reunion of the iconic Swedish supergroup ABBA. The technology: one part augmented reality, one part Star Wars. The magic: indescribable.

Before the curtain was up, the chant had begun: “We want ABBA!” The mosh pit at the premiere of ABBA Voyage in London echoed the Australian audience from 45 years earlier, captured forever on celluloid in Lasse Hallström’s 1977 concert film ABBA: The Movie. 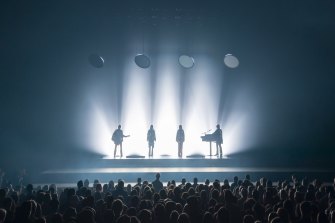 45 years in the making … the virtual ABBA take to the stage.Credit:Johan Persson

From the first explosive moment to the last, the show was pure ABBA. Re-created digitally by the original band members – Agnetha Faltskog, Bjorn Ulvaeus, Benny Andersson and Anni-Frid Lyngstad (Frida) – it depended to a degree on the audience’s willingness to suspend disbelief.

But the beautifully natural imperfections of ABBA Voyage – giggly interplay between the two couples, and historically accurate but ever-so-slightly-imperfect choreography – gave the concert a natural intimacy, and an almost unexpected authenticity.

Our vantage point is best described as the Swedish quarter. I am seated with Andersson’s staff, the band’s original publicist Gorel Hanser and, just a few rows in front of us, their majesties, King Carl XVI Gustaf and Queen Silvia of Sweden.

After all, how can you really perform Dancing Queen, without an actual queen in the house? The Swedish royals were not attending in an official capacity, a courtier informed we as we took our seats, but rather in their capacity as personal friends of Sweden’s most famous musical export.

Earlier, all four members of ABBA appeared on the red carpet. And after the show, as their virtual “ABBA-tars” left the stage, they took a bow before a standing ovation from the crowd. It was perhaps not quite the ABBA reunion that many had, for decades, longed to see. But it was a spectacle nonetheless.

With the lights finally down, the stage exploded in lasers and shimmering images. At the centre, at the same time tiny and giant, stood the four members of ABBA, brought back to life, restored to their prime, not holograms, but something more life-like.

To be clear: this is not the real ABBA, but rather virtual “ABBA-tar” avatars created by the four original band members using CGI suits similar to those used in Hollywood films. The band accompanying them on stage is real, but the four members of ABBA are not. It shouldn’t work, but somehow it does.

Perhaps the most extraordinary thing about ABBA Voyage is the way in which expectation and delivery intersect. You come to the show aware of its digital trickery. It speaks to the willingness of the human mind (and perhaps, too, the nostalgic heart) that you so easily fall into the fantasy that what you’re seeing is real. 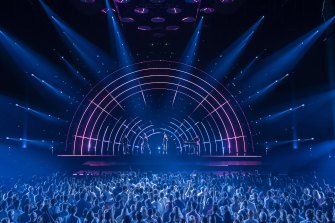 At the same time, what you’re seeing is so perfectly delivered, it’s difficult not to be awed by its technological sleight of hand. If the sight of ABBA, 45 years after the fact but somehow still in their late-1970s bodies, is not enough to impress you, then the scale of the show, its light and sound production, and its musical narrative, surely is.

As a band, ABBA’s discography is vast. But at around 90 minutes in duration with no intermission, ABBA Voyage was always going to be a quietly cruel exercise in choosing your children.

The set list does not disappoint, though to be fair to its concert-meets-discotheque narrative, it naturally favours the band’s iconic dance floor hits, such as Gimme! Gimme! Gimme!, Voulez-Vous, Does Your Mother Know and, of course, Dancing Queen. 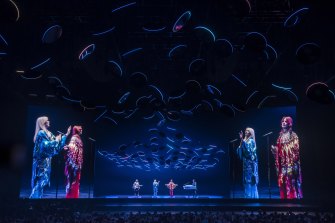 But the classics are there too, the ballads which made the band legendary: the mournful SOS and the iconic Chiquitita. There is a sequence dedicated to the 1974 Eurovision Song Contest where, arguably, it all began, as well as some of the band’s heart-wrenching musical masterpieces, such as Thank You for the Music and The Winner Takes It All. 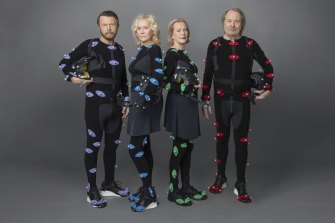 The original ABBA band members in the digital studio to film the virtual concert sequences.Credit:Baillie Walsh

What sets ABBA Voyage apart is not the assembly of its parts. As technical masterminds, Ulvaeus and Andersson have proven their artistic and commercial mettle time and time again, on the original works, on the Mamma Mia! musical, and on their other works, such as the musicals Chess and Kristina fran Duvemala.

Rather, what is created on stage is a journey of fantastical whimsy. It reflects the band’s own story, from Sweden’s folkparks, to the band’s now-legendary 1977 tour of Australia, and beyond. But also the quiet endurance of their fans, older now, and with faded blue eyeshadow, but still swaying to the refrain of the tender, melancholic Fernando.

There are also two of the songs from their new album Voyage, the Faltskog-led Don’t Shut Me Down, and I Still Have Faith In You, with Lyngstad leading the vocals. The latter, of course, speaks directly to the artistic and historic intersection of music, fandom and fame that has bought us to east London in 2022, in search of our former selves, who danced and sang to ABBA in the 1970s, 1980s and 1990s.

How else can we explain the cheers from the mosh pit, the rapturous applause from the royal bleachers and, as the show reached its dramatic crescendo, the fusion of tears and joy? It is the centrepiece of the jigsaw of ABBA, with an almost five-decade-old spoken-word contract for lyrics. “I still have faith in you, I see it now / through all these years, that faith lives on, somehow.”