Network 10's executive producer of sport has overseen the broadcast of major sporting events from the Rugby World Cup to the Australian F1 Grand Prix. But next month, Frank Smith faces what he says will be the greatest challenge of his career: the 2020 Melbourne Cup.

"I do lie awake at night," Smith said. "For 160 years the Melbourne Cup has endured. It's gone through wars, the Great Depression and now COVID-19. It's one of the most iconic events in the world, let alone Australia, and we need to do it justice." 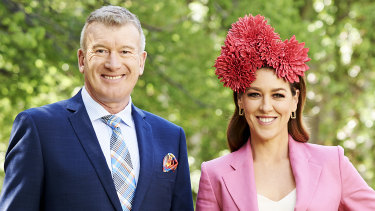 In 2019, more than 80,000 people flocked to Melbourne's Flemington Racecourse to catch a glimpse of the race that stops the nation. This time around it seems that jockeys, essential racing staff and members of the media will be the only ones allowed trackside.

Ten commenced a $20 million five-year broadcast deal with the Victoria Racing Club last year after nabbing the rights from Seven. An average 1.44 million people across the major cities watched the 2019 Melbourne Cup, down from an average 1.89 million the year before.

Smith said he and his team have had to "completely re-imagine" this year's coverage. The November 3 broadcast is set to have a stronger national focus and weave-in pre-recorded performances and interviews as a work-around to lingering COVID-19 restrictions.

International racing expert Francesca Cumani, who helped anchor last year's Melbourne Cup, can't reprise her role due to travel restrictions. She has been replaced by Network 10 sports reporter Stephen Quartermain and TV personality Gorgi Coghlan. The pair will still cross to Cumani, who is based in the UK, for commentary and analysis.

"We felt it wasn't the job of one person," Smith said. "It's not just a racing broadcast. It's fashion, it's entertainment, it's music. And we needed two people who have a good rapport."

Fashions on the Field will be conducted remotely this year, with entrants asked to compete from their front lawns. Network 10 has started pre-recording contestants, with finalists and winners to be announced on Oaks Day. Steering the fashion coverage will be actor Rob Mills and Studio 10's style expert Victoria Latu.

"In the past we didn't know anything about the people who entered the competition," Smith said. "This year we're highlighting them. And they've got really interesting stories to tell."

Producers are also planning live crosses to Australian towns to see how different communities mark the first Tuesday of November.

The day's entertainment lineup also has a national focus. While Neighbours star Bonnie Anderson will perform the Australian anthem live from Flemington Racecourse, others on the lineup – such as alt-rock band The Rubens and singer-songwriter Pete Murray – will perform from New South Wales due to travel restrictions. These two performances, and some others, have been pre-recorded.

"We're travelling around Australia and sharing the day with them rather than just showing it to them," Smith said. "Hopefully the broadcast will be a bit of a shining light for people [during a tough year]. We've put a lot of effort into it."