Father shows "rainbow-farting moose" his daughter painted on her wall

Father who was delighted when his daughter, 10, ditched the iPad for her art set reveals his horror after she drew a ‘rainbow farting moose’ on her bedroom wall

A father has revealed his regret over agreeing to his daughter’s seemingly innocent request to play with her art kit when he saw the finished result of her creativity.

David Neale, from Colorado, revealed he didn’t think twice before allowing his daughter, ten, to play with her art kit, thinking it would ‘take [her] away from the iPad.’

But in a hilarious Twitter thread, the gobsmacked father revealed the little painter had used her bedroom wall and door as a canvas for was he described as a ‘rainbow-farting moose’.

The funny tweet exploded on Twitter where people admitted they were fans of the unusual designs and that David’s daughter did not lack talent. 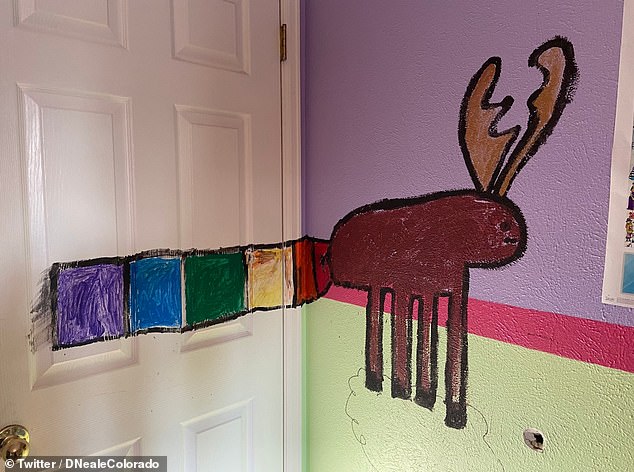 David Neale, a father from Colorado, revealed his ten-year-old daughter used her art kit to draw a giant rainbow-farting moose on her bedroom wall after he gave her permission to play with it

The picture showed a moose drawn on the wall, with a trail of rainbow shades reaching on to the white door of the bedroom.

And the thick black outline of the rainbow had unfortunately smudged on to the door.

The little brown moose appeared to be standing on a cloud, drawn on the wall with pen.

In a subsequent tweet, David added his family were not ‘laughing their a**** off.’

David shared the picture in a hilarious tweet which has since gone viral, gathering 250.200 likes on Twitter and more than 36,600 retweets

The funny tweet went viral, gathering more 250,200 likes on Twitter and more than 36,600 retweets since he shared it on Monday.

David’s colourful description of his daughter’s creativity had Twitter in stitches, but many joked she perhaps had a future as an artist.

‘She’s quite good,’ observed one.

‘This is leagues better than whatever s*** I scribbled on the wall,’ one said.

People loved the moose, asking whether the ten-year-old took commission, and telling David he should keep it on the wall

‘Does she take commissions? My apartment would really benefit from a rainbow farting moose,’ another wrote.

‘Please thank your 10-year-old for that cackle you may have heard from Los Angeles,’ wrote one.