It’s fascinating to see feminist plays that men choose to produce and direct. Spike Heels, by Theresa Rebeck, is a play from 1990, and the weight of three decades gives the work an awkward heaviness it can’t defeat.

With a step back, you can understand why Crashing Water Theatre Company and director Serhat Caradee chose it; company member Joshua Horwitz has a plum role and the play is generous towards it male characters, even when they objectify women or threaten them with sexual assault. It’s a play written by a woman highlighting bad male behaviour, but it makes room for the men to revel in behaving badly. Their abuse serves punchlines more than it serves emotion; it’s rich in anger but light on consequence. 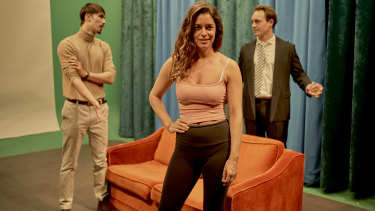 It’s a dated approach that may make for solid drama but doesn’t represent good or incisive feminism. And the drama is constrained. As a work inspired by Pygmalion, certain story beats are necessary: Georgie (Jessica Saras) must cross class lines to enter a new realm of society; she must be hurt by that society; she must, apparently, be in love with her self-described teacher Andrew (Antony Press). The play doesn’t subvert these tropes and feels deeply predictable.

That predictability is, in 2021, troubling. Georgie is threatened with rape by her boss Edward (Horwitz), and men blow past her boundaries and stated parameters of consent. By playing Spike Heels like an angry, feminist-lite rom-com, Caradee and cast are modelling harmful behaviours with very little commentary about those behaviours.

It helps that we bring a contemporary lens to view the work, but the work hasn’t applied that same lens to itself; it feels lazy. That women are still mistreated, like Georgie and Andrew’s fiancé Lydia (Kate Hardy) are, does not make thet play feel relevant. It just reminds us women have experienced sexual violence for a long time. We don’t need reminding.

If there is joy in this production, it’s in Jessica Saras, and her blazing star turn as Georgie. Her anger is justified and never overplayed; her accent work is the most developed on the stage; her inner life is clear across her face. If this play doesn’t work as a feminist piece anymore – and it really doesn’t – Saras ensures the woman at its heart remains as vital and real. We’re on her side every minute.