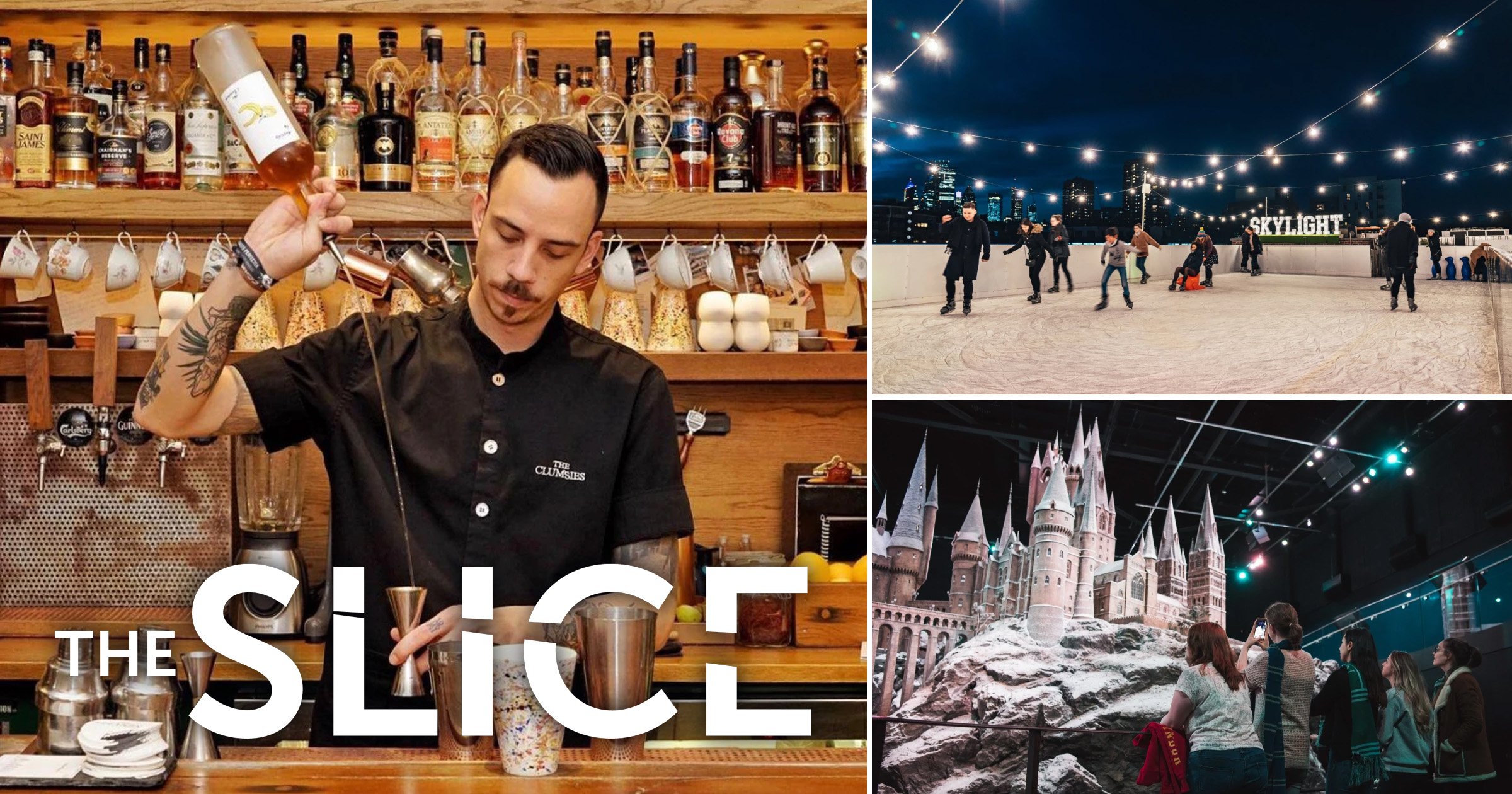 Feels like a lot of our Christmas fun is going to be happening up on the roof this year what with Sabine winter-wonderlanding the shizzle out of St Paul’s and Skylight getting in on the lofty rink action.

But it’s not all going on up high. Oh no.

We will also be keeping our feet on the ground — to begin with at any rate — at a tour of Harry Potter’s Hogwart’s manor, Club de Fromage’s 15th birthday party, Bando Belly’s boozy bingo in Peckham, and the opening of Hackney’s biggest taproom to date.

Be still our beating livers!

Too chicken to play?

Just the name of it rolls off the tongue in such a way that you feel compelled to check it out: Bando Belly boozy bingo. Feels good to say, right?

And that’s just the start. Bando Belly is south London’s hottest soul fusion spot, bringing fried chicken burgers and tater tots to the good people of Peckham and, as if that wasn’t a big enough draw, they are now adding — you got it! — bingo with cash prizes, courtesy of Wray & Nephew rum and those boozy ice pop purveyors Wavey Ice — all with a bit of a boogie thrown in.

Oh, and entertainment from Manga Saint Hilare and comedian Daman Bamrah. Face it, that is a fairly complete night out!

If you’re thinking that a cheese and wine evening is a bit fancy for you (we can do fancy, no problem), then how about a beer and cheese tasting? We’re in. Well, we tend to have cheese on toast after a beer anyway, so we’re halfway there.

The evening is hosted by a cheese expert from Local Cheese Cave and a Wimbledon Brewery brewer, and you get six unique cheeses served with six beer and ale tasters — and maybe a bit of chutney and a biscuit, but that’s just us using our imaginations — plus a tour around their taproom.

A great night out, an imaginative early Christmas present and you might get some ideas for a seasonal pantry into the bargain!

Take a lift up to the winter wonderland at Sabine — you know, the rooftop bar with the best views of St Paul’s Cathedral — because they’ve pulled out all the stops to celebrate the first proper Christmas in two years in total style.

Fairy lights, frosted greenery and Christmas trees everywhere, including on the bar — and if you sit outside, heaters and blankies and even a full-scale wooden Alpine ski cabin for all your Instagram needs.

Plus to keep you warm from the inside, their resident mixologist Davide Valvano will be whipping up mouth-watering marvels with rums, gingers, homemade syrups and more — all to be savoured alongside a spectacular winter menu of light bites and sharing plates.

Oh, and then there’s their New Year’s Eve bash…

Conceived — according to its founders — as the club that time forgot, with dad-dancing performers, mistimed balloon drops and generally the sort of stuff that usually closes a club down, it was an instant smash and has smashed (and got other people smashed) ever since.

And to mark the passage of time — and a success that has seen them do Glasto and Ally Pally, to name but two — they are laying on cake, cheap fizz, balloons and a stage show (god help us!).

All that’s missing is you in that outfit. You know the one.

Get your skates on

Eat, drink and skate? What? All at the same time? We don’t have enough hands — especially as we need to be gripping the edge/a more attractive… sorry, we mean more competent skater at all times!

But we reckons we could stagger, especially as it means we get a seasonal visit to the beautiful rooftop wonderland that is Skylight and get to check out the igloo village… and the après ski lodge… and the off-piste speakeasy… and indulge in the Skylight Christmas Cocktail Cinema Experience for some Love Actually/Die Hard action.

Phew! If we don’t get around to actually skating, then so be it. Just imagine that Dickensian warehouse with its cobbles at Christmas…

Now, Hotbox always seemed like a perfect Christmas location to us anyway. Not just because it has the word ‘hot’ in its title, but because its legendary barbecue fare is a little bit of what you fancy on a cold winter’s night.

And now, as if we needed another reason to book a table, they have joined forces with The Clumsies — the Athens-based bar you’ll know from that list of 50 Best Cocktail Bars you saved to your phone — for a two-night residency.

Could there be a more magical way to spend Christmas than at Hogwarts? And this year it’s more magical than ever with a snowy forest, cobbled lanes lined with Christmassy shops and a Great Hall bedecked — and it’s not often you get to use the word ‘bedecked’! — with wreaths and ‘flaming’ Christmas puddings and snowy trees and, way up there, little witches on little broomsticks.

And that’s before you lose it at the fact that you’re walking on the hallowed ground where Harry and the gang once set foot. Treat yourself… even if you are on the naughty list!

They already have a huge flagship HQ in London Fields and now Five Points, Hackney’s largest independent brewer, is taking it a step further, opening a giant new brewery and taproom — the biggest in the whole of Hackers, in Mare Street, which is basically London Fields anyway!

They’ll do anything to make it easy for themselves, that Five Points lot. Fill your boots with iconic Five Points ales, including some seasonal special editions and cask ales — a beer connoisseur’s dream! — with New York-style pizzas from Ace to help counteract the effects of all that beer.

Don’t expect it to do much for your waistline, but your happiness levels should be going up just thinking about it!

How to get your Metro newspaper fix

Metro newspaper is still available for you to pick up every weekday morning or you can download our app for all your favourite news, features, puzzles… and the exclusive evening edition!