A four-year-old girl who suffered excruciating burns in a tragic farming accident is set to spent the next decade undergoing reconstructive surgeries in order to repair the damage done to her face and body.

Little Rawkee Hunt endured horrific third degree burns in the shocking incident on her father’s ranch in Kanab, Utah, where smoldering embers caught in the wind and blew onto her, scorching her skin and leaving her with agonizing burns.

The youngster now faces a lengthy ten-year-long round of surgeries, including a procedure where medical balloons will be inserted underneath the surface of her skin, to fully recover. 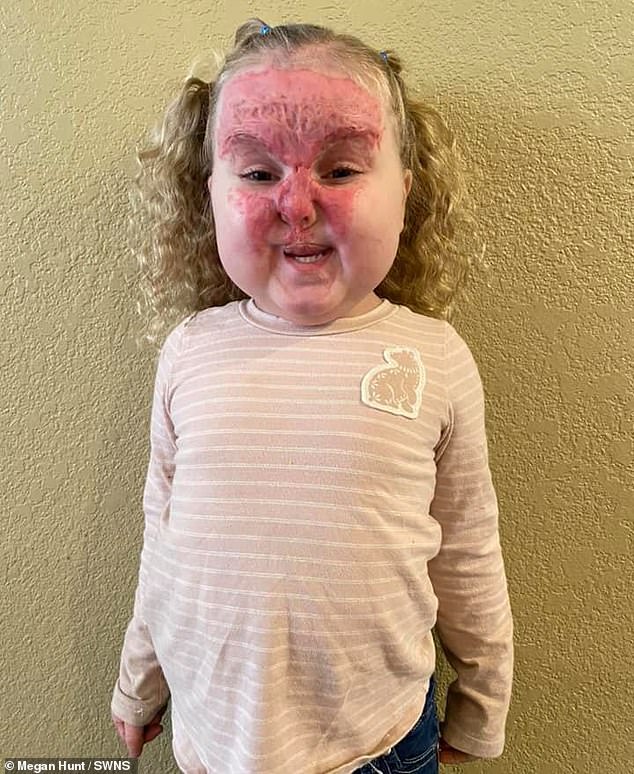 Agony: Four-year-old Rawkee Hunt suffered horrific burns across her face and body in a freak farming accident in February, and she now faces ten years of reconstructive surgery 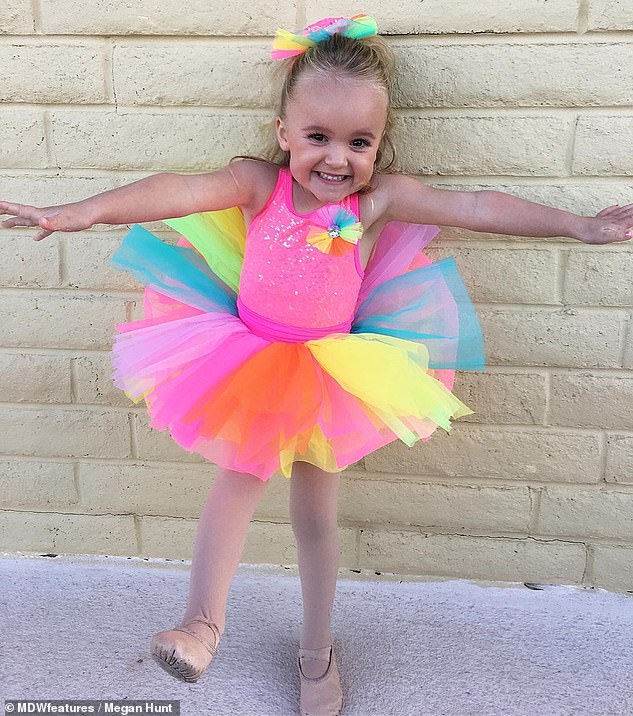 Agony: The little girl, pictured before the accident, was helping her father Shay, 20, burn fence lines when disaster struck and she was burnt by embers that blew onto her

Step by step: Rawkee spent 45 days in the ICU, where she underwent several different surgeries, including a skin graft 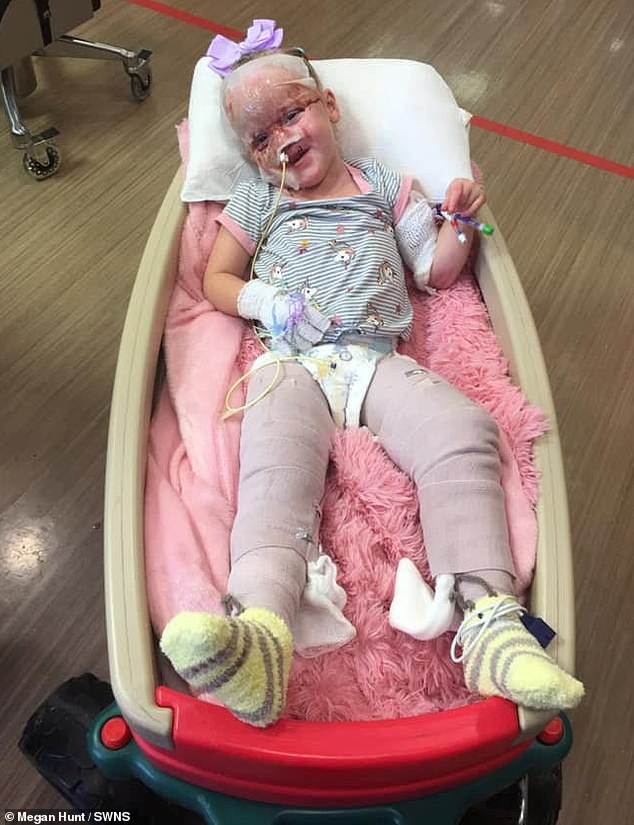 Treatment: Doctors took skin from Rawkee’s right rib cage and the front of both of her thighs to cover the burns on her face, hands, legs, left arm and left rib cage

But mother Megan, 28, a hair salon owner, said that her daughter’s upbeat attitude despite the devastating injuries has inspired the family to stay positive.

‘Seeing her enduring this challenge is empowering to me – she is so inspiring.’

The February 3 accident happened while Rawkee was playing on a ranch, where her dad Shay, 29, a farmer, had just finished burning fence lines – a common farming practice to keep fences clear of weeds.

‘She was playing on the road and Shay was loading up his tools,’ Megan said. ‘He heard her screaming.

‘The wind had picked up the intense heat from the freshly burnt embers and pushed the heat on to her face. She was never actually on fire.

‘He couldn’t see anything. He started pulling her clothes off and he saw her sweater melting into her skin and her face was melting.’

Rawkee was airlifted to a hospital in Las Vegas before she was flown to the University of Utah hospital in Salt Lake City where she underwent multiple surgeries including a skin graft.

Doctors took skin from her right rib cage and the front of both of her thighs to cover the burns on her face, hands, legs, left arm and left rib cage.

After 45 days in the ICU, Rawkee returned home but her body is still traumatized from the event.

Megan said: ‘She has swelled up to twice her size because her endocrine system has collapsed.

‘She is not stable enough for surgery. As soon as she is stable, we will start her reconstruction process.’

Rawkee will be in and out of hospital for the next ten years undergoing multiple surgeries to heal her burns and reconstruct her face.

Megan said: ‘She will have five medical balloons inserted into the healthy tissue on her face – just above the muscle and just below the skin and they will be sewn into her skin.

‘They are estimating that face reconstruction will take three to five years.

‘We will then start that same procedure on the rest of her body and in eight to ten years she should be completely restored.

‘Then she will have cosmetic surgeries over the years to replace the things that will have been lost. 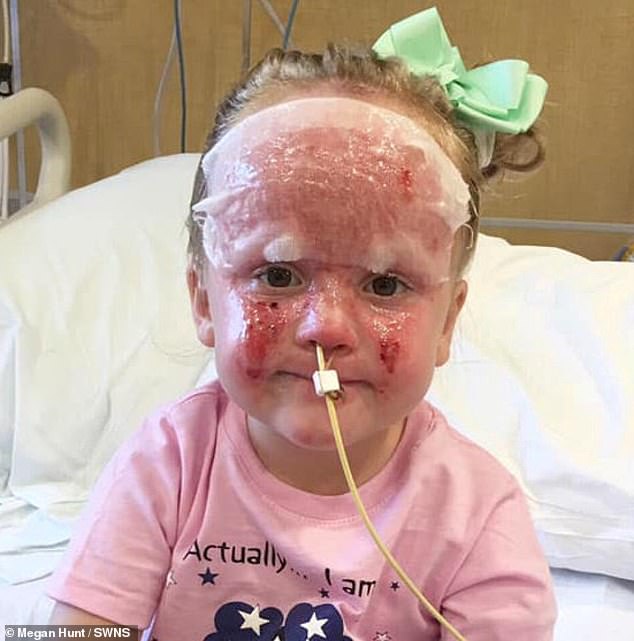 Steps: The next procedure Rawkee will undergo will involve doctors inserting five medical balloons into the healthy tissue on her face 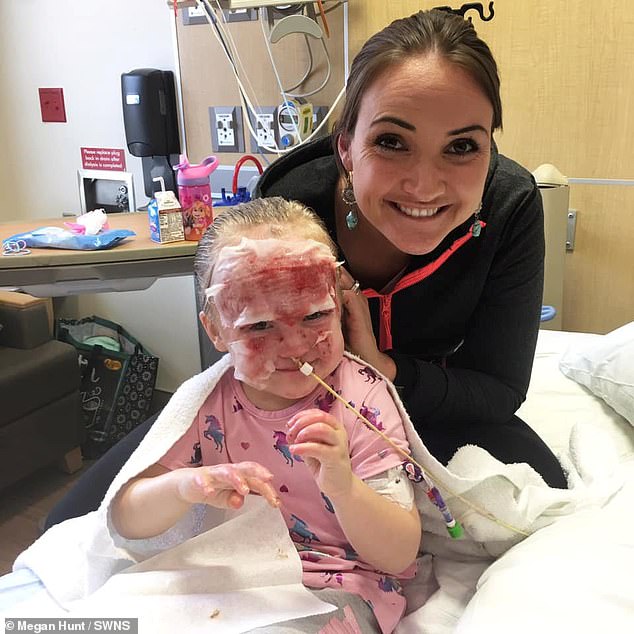 Taking time: According to Rawkee’s mother, the balloons will help to stretch Rawkee’s healthy skin, which will enable doctors to remove her scarred tissue safely 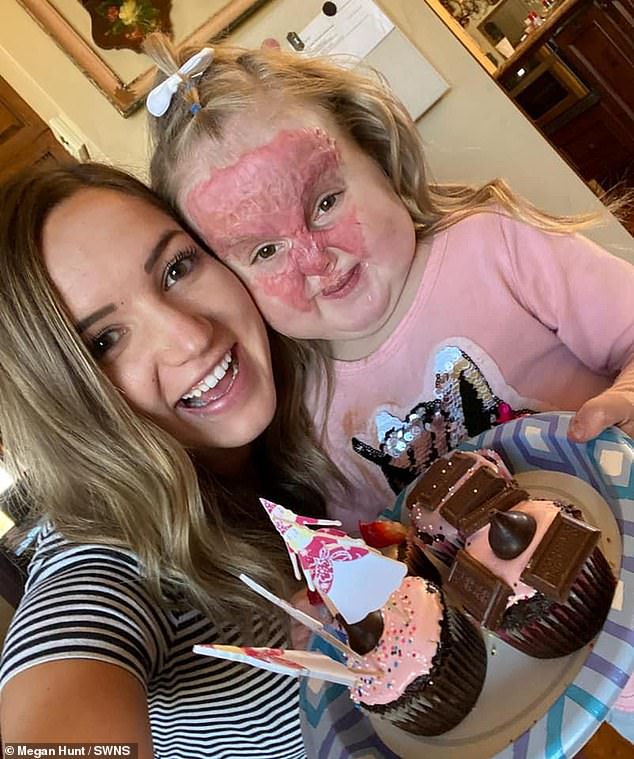 Brave: ‘We will then start that same procedure on the rest of her body and in eight to ten years she should be completely restored,’ Megan explained

‘She will lose two thirds of her hair as we stretched her scalp.

‘Her lips and nose will have to be injected with fat to get them back to normal.’

Megan and Shay, who are also parents to Kwinn, seven, and Martina, two, and are expecting another baby on Christmas day, have set up a GoFundMe to cover the staggering medical bills.

Megan said: ‘I think we broke the million dollar mark just that first week in the Vegas hospital.

‘We’ve got ten years ahead of us of medical bills.

‘Thankfully we both work and we are financially stable but we would like to raise money to put in a savings account for Rawkee.

‘I don’t want this to be a burden for her.

‘A lot of people who go through intense medical situations, get so consumed and buried financially that they lose hope and can’t keep fighting.

‘I want her to have that money so that when she has a surgery, she doesn’t have to worry about how she will pay for it.’