Heartwarming moment cancer-stricken schoolgirl, 17, who was forced to miss her prom while undergoing chemotherapy is surprised with a party all of her own by her friends

This is the moment a cancer-stricken teenager left heartbroken at being forced to miss her school prom was surprised with a ball of her own by friends.

Molly Harrison, 17, from Cannock in Staffordshire, had been looking forward to her big night after her GCSE exams last summer, but was diagnosed with stage four Mon-Hodgkins lymphoma in a bombshell that turned her life upside down.

While her friends went on to party the night away after the stress of their exams, Molly missed out to undergo cancer treatment, forced to watch the fun on Instagram while lying in her hospital bed.

But her thoughtful friends plotted so that Molly could still get a magical night following her treatment, by inviting her to a ‘charity ball’ in March that turned out to be a school prom all of her own – complete with her classmates, teachers and family.

Her friends captured the moment Molly – who is now in remission following several rounds of chemotherapy and radiotherapy – learned of the secret prom they’d organised in a heartwarming video. 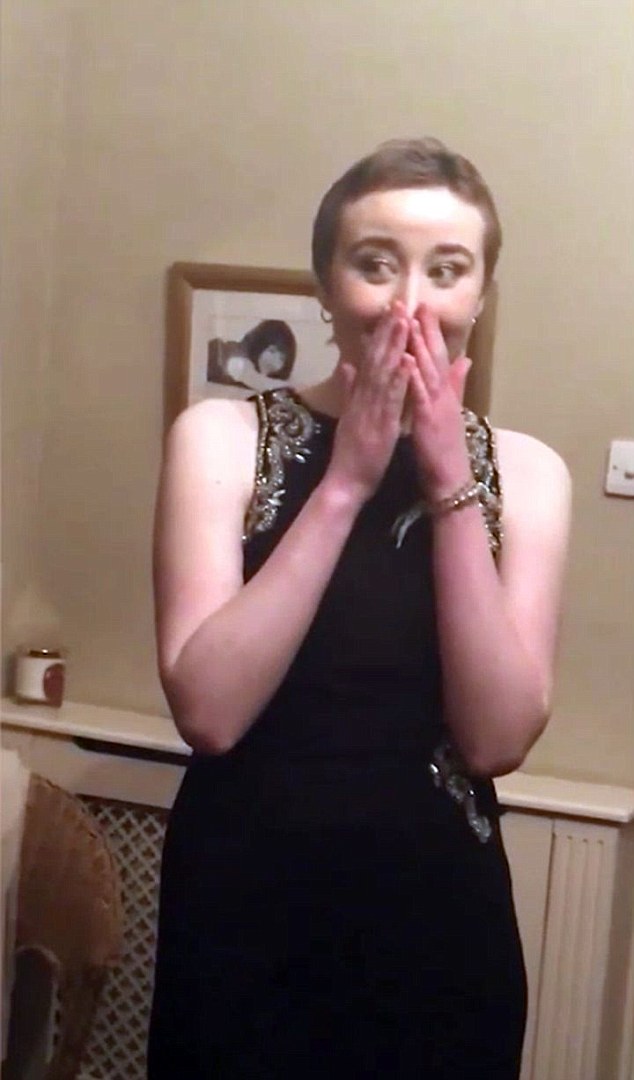 Molly Harrison, 17, from Cannock, was thrown a surprise prom after being left heartbroken when she missed her school ball because she was undergoing gruelling cancer treatment

The teenager can be seen in tears over the surprise, as her friends all gather for an emotional hug.

A pal is heard saying: ‘The hardest part was keeping it from you… we’ve been lying to you for three months.

‘We’ve got everyone from Griffin and some teachers, and all your family, and we’ve organised you a prom.’

Molly is seen clutching her face as she exclaims: ‘Oh my god!’, as her pals add: ‘And we’ve been raising money for CLIC Sargent’.

Molly hugs her friends in excitement as she asks for a tissue before thanking her kind pals. 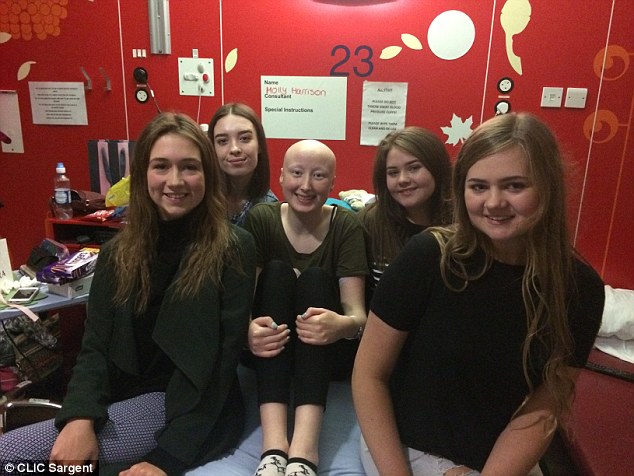 ‘I was gutted to miss the prom,’ Molly has since admitted. ‘I was going to go with my friends and I just felt like I was missing out on it and all the plans we made for the summer.

‘All the way through Year 11 there is such a big build-up to the prom. Everyone gets excited about it and it’s a great chance to say goodbye to your friends.

‘You work so hard all year for your GSCEs and the prom is a good way to celebrate.

‘It was hard to see all the Instagram posts and snapchat stories in my hospital bed. It upset me to see it all,’ she added.

What Molly did not know was that best school friends Harriet Murray, Caitlin Cooper, Bekky Dudley and Joanna Antoszkiewicz, from Cardinal Griffin Catholic College in Cannock, were hard at work organising her own special prom instead.

The girls invited fellow pupils, teachers and Molly’s family to what they described as simply a night out to raise vital funds and awareness for CLIC Sargent, a charity that helped her family through her cancer battle.

‘The hardest part was keeping it a secret from Molly. Literally everyone knew except for her,’ Harriet said.

‘Through the event we gathered together family, friends and even past teachers who knew Molly and were willing to show their support.

‘Finally, we can say that we gave Molly the prom night she deserved.’ On the big night the girls all got dressed up at Molly’s house, telling her they’d booked a table at a charity night.

But before they were about to leave the girls finally revealed to her that they’d organised her very own prom at Cannock’s Premier Suite.

‘I was in total shock, I had absolutely no idea, I was just speechless,’ Molly admitted.

‘I just asked them ‘How long have you been doing this?’ I remember looking at them thinking: Is this a joke? Are you kidding? We all started to cry. 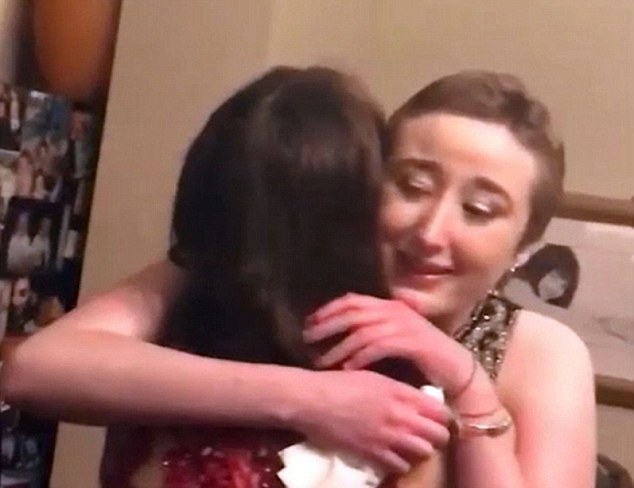 Molly was speechless and burst into tears when her school pals finally revealed details of ‘The Secret Prom’ in her honour, in a touching video captured by pals

‘It was like everyone knew but me, I couldn’t believe no-one let it slip.

‘We all walked into the venue together and everyone started to clap. It was so surreal, I didn’t realise how many people knew or cared.

‘Seeing everyone made me realise how amazing people are when they come together.

‘Everyone put aside any differences and danced all night together, raising money for a great cause.’

The night was a huge success, raising £2,472.32 for CLIC Sargent, who gave Molly and her family emotional, practical and financial support through her diagnosis and treatment. 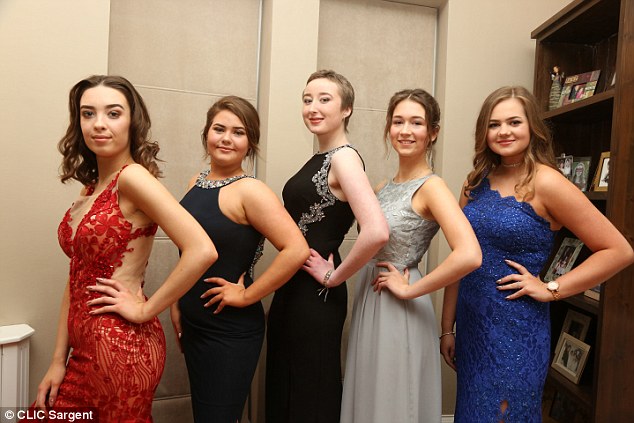 LR – Harriet, Catlin, Molly, Joanna, Bekky who organised the special occasion for her, inviting her family, friends and even teachers

Before her diagnosis, Molly had been suffering with constant itching, breathlessness, night sweats, tiredness and a cough that wouldn’t go away.

She put it down to the stress of her GCSE exams.

But in July 2017, Molly received a shock diagnosis of stage four Non-Hodgkin’s lymphoma after tests at Birmingham’s Queen Elizabeth Hospital.

‘After my last exam, my mum took me to the doctor,’ says Molly, who lives in Cannock.

‘We assumed I might have asthma, I didn’t really think about anything else.It never even crossed my mind it would ever be cancer.’ 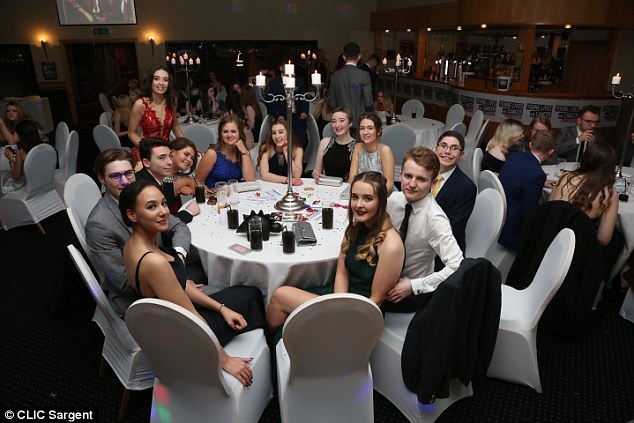 The girls invited fellow pupils, teachers and Molly’s family to what they described as simply a night out to raise vital funds and awareness for CLIC Sargent, a charity that helped her family through her cancer battle

Tests revealed a huge 17cm mass across Molly’s chest that had already caused one of her lungs to collapse.

After a biopsy and further tests, she received the devastating news that she had cancer.

‘It was very surreal,’ Molly recalls. ‘The nurse and my parents came in and looked like they had been crying.

‘I can’t remember crying when they told me, I was just in shock. It was like an out-of-body experience, like watching a film about somebody else.’ Loyal friends Joanna, Caitlin, Harriet and Bekky visiting Molly at the beginning of her cancer treatment

After picking up her GCSE results where she received five A*s, two As, and three B grades, Molly had to return to hospital.

That’s why she had to miss out on the school prom night – and plans for ‘The Secret Prom’ were begun. 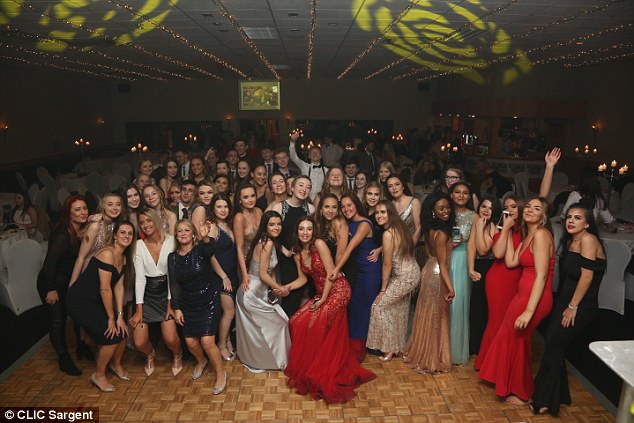 ‘This is such an inspiring example of an incredibly thoughtful and selfless group of friends,’ she says.

‘They ultimately wanted to give their best friend the prom she deserved.

‘It was a pleasure to support them and they have even pledged to continue to fundraise for CLIC Sargent, so that ultimately no other young person diagnosed with cancer has to face that alone.’

The brave schoolgirl says that she had a lot of help from the CLIC Sargent charity, for whom funds were raised at ‘The Secret Prom’. 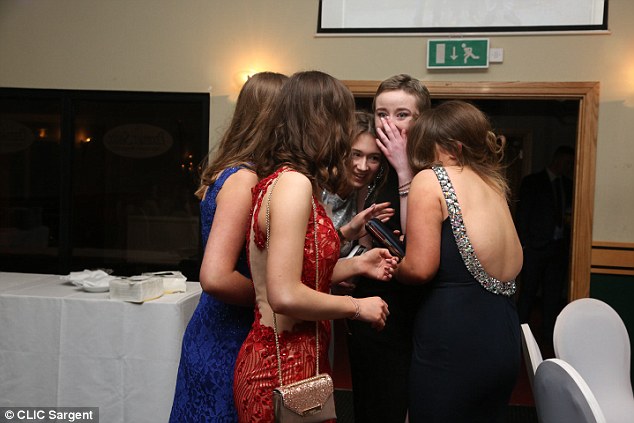 The night was a huge success, raising £2,472.32 for CLIC Sargent, who gave Molly and her family emotional, practical and financial support through her diagnosis and treatment

‘I had amazing support from the two social workers, Orlando and Sam, when I was on the Young Persons Unit,’ she explains.

‘They really helped with the long periods of time me and my family spent on the hospital ward and always knew how to make me and my sister laugh.

‘They really understand how to help families deal with the pressures treatment can put on relationships, and how to adapt to a new life in and out of hospital.

‘Becky, another CLIC Sargent social worker who visited us on the ward, would come and talk to me and my mum; she helped us with all the finances and all the paperwork.

‘Being in hospital was the first time I’d heard of CLIC Sargent, I was surprised that this support would even be on offer.’ 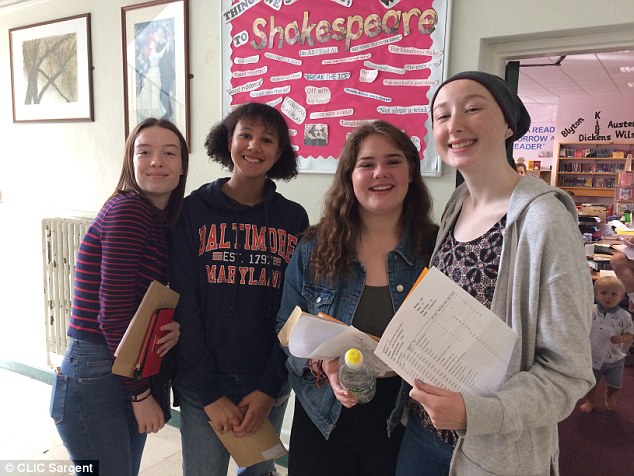 After picking up her GCSE results where she received five A*s, two As, and three B grades, Molly had to return to hospital (GCSE Results Day- Molly on the right)

Now, the teenager, who is in remission, is delighted that her friends have given something back to thank the charity that helped her through it all.

‘I love my friends anyway but I’m so proud of them that they put this on for me,’ she says.

‘They are the most beautiful people inside and out and they have exceeded anything I could ever imagine anyone ever doing for me.

‘I have a group of friends for life and I love them more than words can say.’

For more information about CLIC Sargent go to www.clicsargent.org.uk 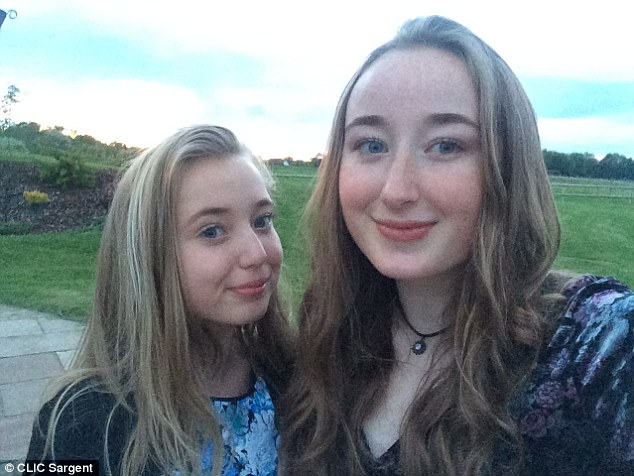