Treasurer Josh Frydenberg has gained an edge over his federal peers on a key measure of personal popularity, with surveys showing he has a net likeability rating of 3 per cent at a time when others have slumped to negative results.

Voters rated Mr Frydenberg ahead of other Coalition and Labor politicians at the same time they marked down Prime Minister Scott Morrison, who slipped to a net rating of minus 6 per cent in November. 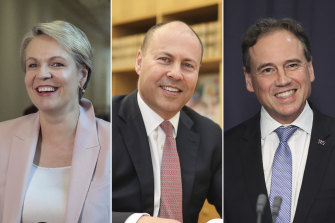 Voters rated Josh Frydenberg, centre, ahead of other Coalition and Labor politicians. They also had a positive perception of Tanya Plibersek, left, and Greg Hunt.Credit:Alex Ellinghausen/Stephen Kiprillis

The exclusive results, based on surveys of more than 1600 eligible voters every month since April, also confirm the challenges for Labor leader Anthony Albanese ahead of the federal election, with voters giving him a net rating of minus 6 per cent in November.

Voters have a more positive perception of Labor education spokeswoman Tanya Plibersek, who had a net rating of 2 per cent in November and a positive result in each of the monthly surveys.

The only other federal politician to gain a consistently positive rating was Health Minister Greg Hunt, who had a net rating of 1 per cent in November.

The results in the Resolve Political Monitor, conducted for The Sydney Morning Herald and The Age by research company Resolve Strategic, are collected each month alongside questions about support for political parties and views on key issues.

The question about political leaders and parties says: “Below is a list of people and organisations that are active in politics and public life. For each, please tell us whether you have heard of them and, if so, whether you have a positive, neutral or negative view of them.”

The question can favour leaders in government because they gain more attention in the media, but the results show this did not prevent Mr Morrison slipping to a negative result in November after positive ratings in every other survey.

The Australian Election Study, which is produced after every election by the Australian National University with academic experts from around the country, found in 2019 that only 7 per cent of voters named party leaders as considerations in their voting decisions.

One of the investigators on the study, ANU senior lecturer Jill Sheppard, said voters generally named education, health, immigration and governance as major issues when deciding their vote but personal leadership could also be a factor.

If a government was operating smoothly, she said, some of this might be attributed to some innate characteristics of the leader.

“All of which is to say of course the leader matters, but we absolutely overstate how much they matter in isolation from the entire machinery of government.”

Asked their view of Mr Morrison in November, 33 per cent of respondents were positive, 39 per cent negative, 25 per cent neutral and 3 per cent did not know of him.

This produced a negative rating of minus 6 per cent, down from 4 per cent in October, 9 per cent in September and a high of 17 per cent in May after the federal budget.

Asked about Mr Albanese, 24 per cent were positive, 30 per cent negative, 38 per cent neutral and 8 per cent did not know of him.

This produced a net rating of minus 6 per cent, down from minus 3 per cent in October and similar negative results in each of the monthly surveys.

While Ms Plibersek had a better net rating, this reflected in part a large number – 29 per cent – who did not know of her. Of the remainder, 21 per cent were positive, 19 per cent negative and 32 per cent neutral.

The results for Ms Plibersek were positive in each monthly survey, ranging from 9 per cent in May to 1 per cent in November.

Mr Hunt was also rated positively in each survey with a peak of 10 per cent in May, when the budget included large spending measures on aged care and mental health.

Asked about Mr Hunt in November, 18 per cent were positive, 17 per cent negative, 35 per cent neutral and 38 per cent did not know of him.

Asked about Mr Frydenberg, 25 per cent were positive, 22 per cent negative, 35 per cent neutral and 19 per cent did not know of him.

This gave the Treasurer a lead over Labor treasury spokesman Jim Chalmers, who was not known by 58 per cent of respondents in November and similar proportions in every monthly survey.

Asked about Mr Chalmers, 9 per cent were positive, 12 per cent negative and 22 per cent neutral. This produced a net rating of minus 3 per cent.