Gendered school uniforms should be a thing of the past 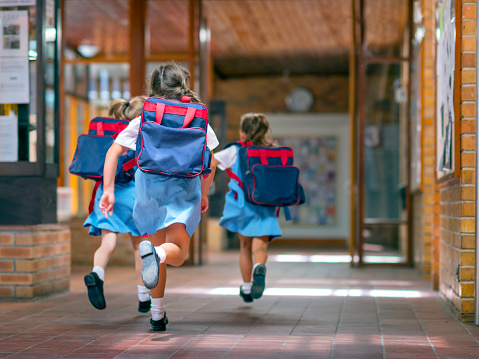 As I navigated the uniform policy ahead of my four-year-old son starting school for the first time in September, I was surprised to see different options for boys and girls.

With a child of each gender, I was shocked to realise that my son can wear shorts, but my two-year-old daughter won’t be able to when she starts school in a few years. In addition, dresses, cardigans and – strangely – white socks are deemed only appropriate for girls.

I found this a difficult pill to swallow. Treating my children fairly is very much a part of my parenting, and with society pushing to embrace a more equal approach, I immediately wondered why schools need to divide and gender children from the age of four. Couldn’t uniform policies be neutral and allow everyone the choice to wear anything?

Separating children by gender from such an early age reinforces societal pressures from popular culture and social media that they will face for the rest of their lives. They have years ahead of society showing them what boys and girls ‘should’ do – couldn’t we give these little people a bit longer to just be little?

I’m passionate about this because I believe that boys and girls are equal – I want children to grow up knowing they can do what they want and dress how they want regardless of gender.

Outside school, gendered clothing is the norm from the get-go. Tiny baby girls are adorned with hair bands, so we don’t mistake them for boys. I try not to dress my children in particularly limiting or stereotypical clothes and allow them to choose what they want to wear. The notion that they must conform to gendered uniforms at school feels limiting.

Still, my son is given clothes as gifts featuring dinosaurs and sharks. My daughter gets bunnies, butterflies, and other cute and fluffy animals. What impression do we give kids when we dress half of them as predators and the other half as prey?

There is a huge disparity in the messages we send to children through their clothes. Boys’ clothes cry ‘play, move, be brave’. Girls’ whisper ‘sit still, look pretty, don’t get messy’.

Surely cardigans are gender-neutral – why can’t boys wear them? Or indeed a dress or skirt if they want?

It’s one that’s reiterated by uniform expectations. For example, boys’ school shoes are thick and hard-wearing. Girls’ shoes are often pretty and thin.

I have to ask, why shouldn’t my daughter be able to wear shorts to school? She likes running and climbing just as much as her brother. And yet, because he’s a boy, he’s given more freedom to play and take risks.

It doesn’t just go one way. My son should be able to wear a uniform usually prescribed for girls too.

Surely cardigans are gender-neutral – why can’t boys wear them? Or indeed a dress or skirt if they want? Allowing more space for people to choose and removing a boys versus girls binary would be helpful for everyone.

Schools are a place where expectations are learned, opinions are formed, and where children grasp how to understand and navigate the world. In these settings, it’s critical not to split children by gender lines, but instead lay a groundwork of neutrality and equality.

The classroom is exactly the place where kids should be taught not to treat anyone any different because of their gender.

But splitting kids up by what they wear is sexist and outdated. It’s literally old school.

What I would like instead is to see the current uniform offering – trousers, skirts, dresses, cardigans, white socks – opened up to all children and they can choose what they wear. There would be no expectation on parents to buy all of the items, instead working out what suits their child’s needs best.

This would give more choice to everyone, rather than reductively reducing people to their gender. Gender norms hold us all back; they can be exhausting to boys, girls, men, women, and non-binary people.

At the minute, schools all over the country have vastly different approaches – some schools still don’t give girls the option of wearing trousers at all, while on the other side of the coin, in 2018 40 schools banned skirts for girls and moved all pupils over to a gender-neutral policy of trousers.

I don’t understand it.

So, what to do? I’ve been researching how to ask your school to review their uniform policy. The first step is to talk to the headteacher, school governors or parent-teacher association, which I’ll be doing in September (I missed my chance before the summer holidays).

I’ll be asking my school to consider moving away from having two separate uniform policies for boys and girls and instead if they can have one set of broad clothing options for all.

I understand it can be a long process but I’m hopeful that a move towards a gender-neutral policy would be uniformly helpful for everyone.

Weather permitting, my son will be starting school in a pair of shorts in September, and my daughter will also be wearing shorts on her first day of pre-school.

I hope by the time she starts school in two years she’ll have that option, too. I want my children to have choice rather than limits and to be able to express themselves however feels best for them.