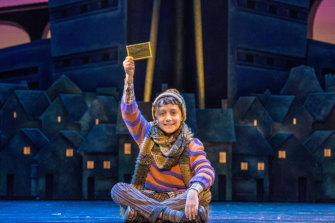 Oliver Alkhair as Charlie in Charlie and the Chocolate Factory – The New Musical. Credit:Jeff Busby

Just as Charlie Bucket wins a Golden Ticket in Roald Dahl’s beloved tale, five Melbourne boys shared a similar thrill when told they had the part of Charlie. An open call on the show’s website saw enough hopefuls respond that auditions in March took four days. “We whittled it down to a final few and then we sent videotapes to the US creative team and then they did approval for final five boys who we have now,” says Robbert Van der Zwaag.

As company manager of the production Charlie and the Chocolate Factory, his job involves co-ordinating the 95 people it takes to stage the show every night, which includes cast, orchestra, touring crew and local crew, child chaperones and resident creative team, however “we don’t tour the kids”.

Instead, 10-year olds Benjamin Belsey, Elijah Slavinskis and Edgar Stirling, from Point Cook, Ashburton and St Kilda respectively; plus 12-year old Lenny Thomas from Bonbeach and teenager Lachlan Young, 13, from Camberwell will share the starring role of Charlie for the Melbourne season, which is anticipated to run for at least four months. 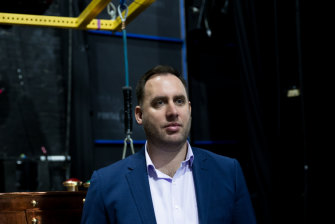 To get them up to speed for opening night, the resident creative team began flying to Melbourne in June for weekly rehearsals, while the show continued to play in Sydney. Once the rest of the cast arrived in Melbourne, studio rehersals began while the show was bumping into Her Majesty’s and then “the Charlie's get ‘tech-ed in’, as we call it” during the technical rehearsals in the theatre.

Each night, there’ll be a Charlie on stage and one in the wings on standby and they rotate through, with each child actor having a chaperone taking care of them. School continues as normal but come night time, they help bring Willy Wonka’s wonderful world to life. “The boys are fantastic,” says Van der Zwaag. “Seeing them really get excited about the role, the show… it really brings something to the whole company to see that young enthusiasm”.