Fans of the Amazon legal drama Goliath have been waiting for new episodes since 2016. All of that anticipation is paying off when Season 2 premieres on June 15, but will Goliath return for Season 3? Amazon has yet to renew the drama, for which Billy Bob Thornton won a Golden Globe, for a third season, but fans are likely hoping that if the drama returns, the next hiatus won’t keep them waiting quite so long.

As the show’s name suggests, Goliath puts a legal twist on the Biblical underdog story of David and Goliath. Thornton stars as Billy McBride, a former superstar lawyer who co-founded law firm Cooperman McBride with his business partner Donald Cooperman (William Hurt). McBride quits the firm and turns to alcoholism after a murderer he helped acquit goes on to kill an entire family. Cooperman, who remains in charge, is the menacing Goliath to McBride’s David, as he hides in the shadows of his penthouse office.

At the end of Season 1, McBride faced off against Cooperman in a courtroom showdown. He won a huge victory in a wrongful death lawsuit for the Larson family against the malicious company Borns Tech, one of the biggest clients of Cooperman McBride. It was a tidy way to wrap up the first season, but fans can expect a new case and interesting characters for Season 2. 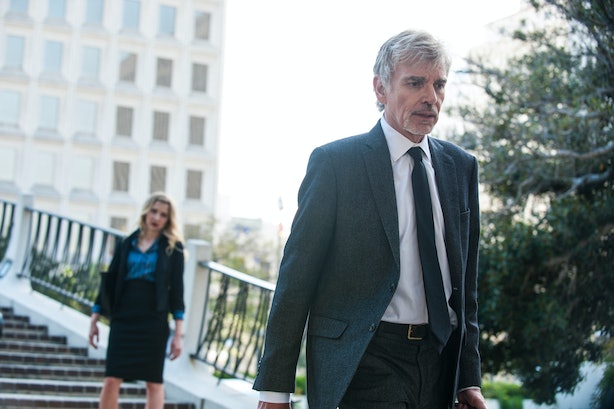 In an interview with Entertainment Weekly, Thornton joined showrunner Lawrence Trilling to tease the eight-episode second season, which Trilling said picks up about six months after the Season 1 finale. Despite the major payday that came from winning his case, McBride is still not happy. “His soul is not any healthier or happier in spite of money, which is weird because we thought before this that money makes you happy, but we learn through Billy’s journey that it doesn’t [make you happy],” Trilling said. He hinted at some “formidable obstacles” coming the protagonists way next season as he finds meaning in his life through his ex-wife and daughter.

In the same interview, Trilling revealed that Season 2 will feature a criminal trial involving politics, the LAPD, and Mexican drug cartels. Thornton also talked about the complex layers of Billy McBride and how his character deals with his inner conflicts. “I think he accepts his demons and does the best he can with them,” he said. “It’s like ‘Okay, here’s what I got, here’s what’s wrong with me. I know it’s probably not going to change.’ …I think his demons drive him.”

According to Deadline, Season 2 will bring in several new characters, including Tom Wyatt (Mark Duplass), a developer with deep pockets who is up to no good. Duplass will be joined by Morris Chestnut, whose Chief Deputy District Attorney Hakeem Rashad has a grudge against McBride from a former case, and Ana De La Reguera as Los Angeles mayoral candidate Marisol Silva.

The Goliath Season 2 trailer features McBride paired up with DUI lawyer Patty (Nina Arianda) as they take on a new case. After a kid named Julio (Diego Josef) is accused of murder, McBride is pitted against Rashad in court, and he soon realizes this case is more complex than he bargained for as he races to find the truth. McBride’s assistant Brittany (Tania Raymonde) is also seen in the trailer with Wyatt, presumably to uncover information about his illegal activities. There are a lot of punches thrown and sirens blaring in the action-packed clip.

Based on the trailer, it seems Goliath is bringing a lot of twists and turns for its sophomore season. Season 3 may not be confirmed, but at least fans are finally getting a long-awaited update on the brooding underdog as he continues his search for inner peace while working on chaotic cases.