Defence staff are likely to be mobilised to help the aged care sector deal with soaring coronavirus infections among residents and workers after Prime Minister Scott Morrison promised to do “everything we can” to address the crisis.

With more than 40,000 residents yet to receive booster vaccine shots across the sector, and an aged care peak body estimating just 40 per cent of workers have had three doses, the government is working on a plan to send in Australian Defence Force personnel after weeks of calls for more federal support. 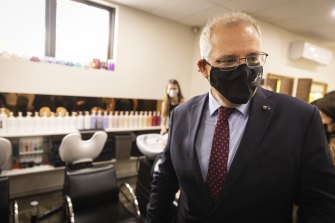 Prime Minister Scott Morrison promised “further support” for aged care on Friday in a political fight over the strain on residents and their families, as Labor stepped up calls for Aged Care Services Minister Richard Colbeck to resign over the crisis.Credit:Paul Jeffers

But the government cooled talk of large numbers of Army Reserve medical staff going into aged care facilities, saying this would only redirect doctors and nurses from existing jobs in healthcare.

Mr Morrison promised “further support” for aged care on Friday in a political fight over the strain on residents and their families, as Labor stepped up calls for Aged Care Services Minister Richard Colbeck to resign over the crisis.

Federal Parliament will meet on Tuesday in its first sitting of the year with Labor leader Anthony Albanese planning to intensify pressure on Mr Morrison over Senator Colbeck’s performance, after the minister attended a three-day cricket match as aged care cases and deaths rose.

Labor’s health and aged care spokesman, Mark Butler, said: “I just don’t think he’s up to the job of dealing with a sector that is yet again in crisis, he’s not demonstrated any ability to get things done.”

Mr Morrison admitted the Omicron wave had caused “terrible challenges” in aged care, with about half of the country’s aged care facilities battling outbreaks and the death toll among residents nearing 600. Official figures show 40,733 aged care residents who are eligible for a third dose are yet to receive a booster.

The Prime Minister said on Friday he had asked Defence Minister Peter Dutton and Health Minister Greg Hunt to discuss the ADF intervention, calling the problem a “crisis” at one point before describing it as a “situation of this nature” and then confirming the “crisis” description.

Declaring that Australia’s aged care sector was faring better than those in other countries, he said: “I know that’s not a comfort to those who have those in aged care, but at the same time, it is the fact that we will continue doing everything we can.”

Some aged care providers told this masthead as few as 17 per cent of their workforce had provided proof of their third dose, and accurate figures have been difficult to gather as it only became mandatory for workers to report boosters from January 25.

Paul Sadler, chief executive of peak body Aged and Community Services Australia, said in NSW about 30 to 40 per cent of aged care staff had received boosters.

At the same time, thousands of aged care workers had either caught the virus or been forced into isolation as close contacts, putting “huge pressure” on a system that was already struggling to cope, Mr Sadler said. He urged the government to send support into the sector now.

“We’ve been saying this is a crisis for some weeks now, since the Omicron wave started, and we can’t leave all the people without adequate levels of care for too long.” 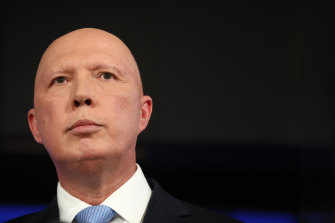 Defence Minister Peter Dutton said there was “no limit” on what the government was prepared to do to help the sector.Credit:Dominic Lorrimer

Mr Morrison said the ADF was not a “shadow workforce” and pointed out medical reservists had jobs as doctors and nurses outside defence. The federal government has not yet detailed how military personnel would assist in aged care.

“It’s welcome that the federal government is listening,” Mr Baird said. “Residential aged care homes under particular stress could use any extra help that is made available.”

Montefiore chief executive Robert Orie said while 50 per cent of staff have told the aged care provider they had had boosters, workers had struggled to find the time to arrange their vaccinations.

Uniting Care’s director of ageing, Saviour Buhagiar, said 34 per cent of its staff had had a booster shot but the recent reduction in the time between second doses and boosters would “significantly lift” the rate of third doses among staff.

The COVID-19 Taskforce led by Lieutenant-General John Frewen has just launched a second round of booster clinics in aged care and a Department of Health spokesperson said more hubs were being created to help workers get boosters.

“We are undergoing work to make sure residents and staff at facilities that have already received a booster clinic but were not eligible, or chose not to be vaccinated, have the opportunity to get a booster and maintain their protection from COVID. Second visits will be offered to facilities,” the spokesperson said.

But Mr Butler said the government should have started revisiting facilities much earlier.

“You’ve got to keep going back, you think they would have learnt that,” he said. “How many times do we have to see history tragically repeating itself before this Prime Minister learns from his mistakes?”

Aged Care Matters director Sarah Russell rejected Mr Hunt’s suggestion that vaccine hesitancy was behind the low levels of booster take-up in aged care, after he said earlier this week that some families and residents were withholding consent.

“Families have been contacting me since early December, crying out for boosters so their loved ones could be safe,” Dr Russell said.

Kathy Eagar, director of the Health Services Research Institute at Wollongong University, said the government was repeating the mistakes of its initial “botched” rollout of COVID-19 vaccines.

“Families are not the problem. The vaccine booster program in aged care has been poorly implemented,” she said. 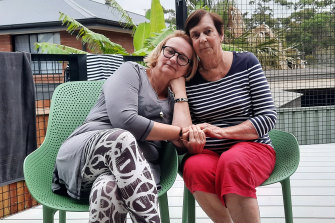 “I was just shocked at how long it took them in aged care to get the booster when it was available to me quite easily in Melbourne, just by going to my local pharmacy,” Ms Glover said.

She said her mother’s home in Queensland’s Bundaberg had been locked down for six weeks, meaning residents did not have the option of going to the pharmacy for a jab.

“That’s the kind of irony of it – they were trapped inside the home,” Ms Glover said.

She rejected the government’s claim that families were holding up the booster rollout as “gaslighting.”

“This is a crisis in the sector. And this minister has failed before. And he continues to fail. What do you have to do to lose your job under this government? If Richard Colbeck had any integrity, he would resign,” he said on ABC Breakfast.