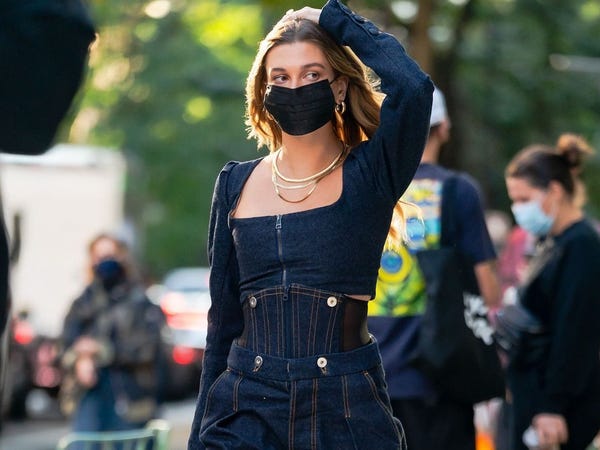 On Thursday, the model was photographed walking around New York City in a zip-up denim crop top with long, puffy sleeves. The top was worn over a zip-up denim corset, which was tucked into even more of the fabric: a baggy pair of jeans.

Bieber's recent outfit mixed the antique style of corsets with the early 2000s-inspired denim-on-denim look. The latter style was made most famous by Britney Spears and Justin Timberlake when they wore matching denim ensembles to the 2001 American Music Awards.

Spears donned a strapless dress made from denim at the time, and Timberlake coordinated in a jean suit jacket, denim pants, and a matching fedora.

Their red-carpet looks have continued to inspire fashion brands for more than a decade after the event. While some retailers have sold jeans with denim skirts on top, others have offered jeans with plastic patches. Those designs and others have baffled shoppers, who have expressed mixed opinions about the trend.

Corsets, however, are even more controversial, as experts have expressed concerns that the garments and other waist-training devices might cause bruising, nausea, and fainting. Some people also worry that corsets and waist trainers can negatively affect mental health, as the garments might cause some to feel insecure about their bodies.

Both trends have been coming back into style since 2019

Despite denim critics and corset-related health concerns, celebrities continue to wear both trends. Back in November 2019, Kim Kardashian West wore an outfit extremely similar to Bieber's at the WSJ Mag Innovator Awards in New York City.

She donned an off-the-shoulder denim corset with bubbled sleeves, matching pants, and blue leather chaps that extended over pointed boots.

Her sister, Kylie Jenner, also put her own unique spin on the corset trend in 2019. While on vacation, she paired an off-white corset with a long-sleeved, floral dress, cat-eye sunglasses, and a small handbag.

Baby we should hit the South of France✨