“It made me kind of frustrated because you never know what someone’s going through.”

Hailey Bieber is opening up about how she felt after a former restaurant hostess made a TikTok claiming the model was “not nice” to her during their encounters.

In a video posted on her YouTube channel on Wednesday, which featured a virtual conversation with psychiatrist Dr. Jess Clemons, Hailey, 24, recalled feeling “so upset” after watching the TikTok, which went viral last summer.

In the TikTok, Julia Carolan, a former restaurant hostess, rated celebrities — whom she said came into her workplace — on a scale of 1 to 10, giving Hailey the low score of a 3.5. Hailey later apologized. 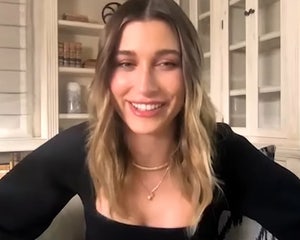 “When I saw her video I was so upset,” Hailey said in her conversation with Dr. Clemons. “There’s never an excuse for being rude. I felt bad that that was her experience with me, but it made me kind of frustrated because you never know what someone’s going through. I remember going through times in my life where I was so sad and so heartbroken that like engaging with people felt hard for me.”

While Hailey said she doesn’t “ever remember meeting” Carolan, she said she “wish[es] I didn’t act that way towards her.”

“I’m a human and I made a mistake and I acted a way that was out of character for me,” explained Hailey, who has been married to Justin Bieber since 2018. “I acted a way that I don’t want to be. I’m trying to do better every single day. I want to continue to grow as a person.

As shown in the TikTok, which was posted last July and has garnered over 18 million views, Carolan shared her “personal experiences” she claimed she had with celebrities — including Hailey, Kylie Jenner, and Bella and Gigi Hadid — whom she said came into the restaurant she once worked at in Manhattan.

Before she addressed Hailey in the clip, Carolan prefaced, “This is going to be controversial.”

Carolan continued, “I’ve met her a handful of times and every time she was not nice. I really wanna like her but I have to give her like a 3.5 out of 10. Sorry!”

A few days later, Hailey took to the video’s comment section to issue an apology.

“Just came across this video, and wanted to say so sorry if I’ve ever given you bad vibes or a bad attitude,” Hailey wrote. “That’s not ever my intention!”

“Hate hearing that was your experience with me but glad u called me out so I can do better!!” she added in another comment. “Hopefully we meet again so I can apologize in person.”

Carolan replied to Hailey’s apology, writing, “Hi Hailey! We love an accountability queen [crown emoji] thanks sm for taking the time to apologize – I hope we can meet again one day and start over. x”