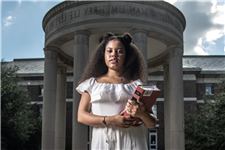 When Haley Taylor Schlitz was in fifth grade, her usually high grades began to dip. Her mother, Dr. Myiesha Taylor, knew she was a star student and her “I don’t care,” response to her nosediving reports wasn’t cutting it. So Dr. Taylor went to the school’s administration to get to the bottom of the issue.

She had a hunch her daughter was bored and needed advanced courses. She was met with opposition from both a teacher and the school’s principal.

“She started with the teacher and asked if I could be tested for the gifted talent program. The teacher denied, saying how I did on the pre-STAAR test and TAKS test [Texas’ standardized tests]. I didn’t do well,” Taylor Schlitz says. The girl’s mother was also told she may need to be held back. The principal then added she couldn’t be tested for the gifted program because testing was only for kindergartners. “Of course, that’s not true,” Taylor Schiltz remarks.

Racism seemed to be an underlying cause and this wasn’t the first time she had faced it. Once, the Texas school produced a play called “Northern Aggression” and had her portray a mixed race slave. In another instance, during a lesson on slavery, a white student turned to Taylor Schlitz and said, “You know, if we lived back in that time, I would own you.”

Fed up with the public school system, Dr. Taylor decided to homeschool her daughter and within two years, Taylor Schlitz had graduated from high school. This year, she’s making history as the youngest Black woman to graduate from law school in America. She is set to earn her Juris Doctor degree from SMU Dedman School of Law.

In-school racism is common, particularly in the Deep South. This is where most Black Americans are based and where Critical Race Theory has received glaring legislative pushback.

In April 2022, Black students of Lubbock, Texas’ Laura Bush Middle School were called “monkeys” on social media. This was done through an account dedicated to harassing the school’s Black students. The kids were also bullied and camera footage allegedly shows non-Black students making monkey noises at Black children as they walked home.

Educators can be complicit in this anti-Black behavior as well. In October 2021, a Houston teacher was fired after using the N-word on camera during class. At Klein Collins High School, the following conversation was recorded:

“I mean, if there’s a word that you’re not supposed to say, why are you saying it?,” a student asked.

“I don’t know. Why do the guys in my class go, you know, say, ‘man (bleeped) you crazy.’ Why do they say that? And why is it ’cause I’m a white guy, I can’t say that? I can’t say the N-word,” the theater arts teacher responded.

In 2021, Texas’ governor, Greg Abott signed a bill into law limiting how current events and the history of America’s racism could be weaved into a school’s curriculum. It is evident Black students will continuously be forced to deal with hostile learning environments. Schlitz, 19, wants to change that.

Taylor Schlitz wasn’t always interested in law; she studied chemistry during her first year of undergrad and half of her second year. Some soul-searching found her wanting to reform the education system in light of all she and her family endured. So she became an education major and focused on becoming a teacher. She realized she could also protect students by pursuing law, since she views teaching as a way to change the institution from the inside and law as a means of changing it from the outside.

“I either want to go into public policy, educational policy, or go into teaching in my near future,” she says. “In the long run, I know that I want to be a law professor one day.”

As for her historical achievement, Taylor Schlitz’s family discovered she could make her mark after she’d done press around entering law school. They researched young Americans who’d graduated from law school (the youngest was Stephen A. Baccus, who graduated from the University of Miami School of Law at 16 years old) and let the girl know what she could accomplish if she finished. Recreating their response, she says, “Holy cow. If you finish this law degree, you’ll be making history.” She was already determined to graduate, but she calls the groundbreaking moment the “sprinkle on the cake.”

“I just always live by the motto that you don’t find your path, you make it,” Taylor Schlitz says. “So don’t let anybody else tell you what you can’t do.”