Heathers: The Musical plunges 20-year-old producer into the deep end

Mitchell Old is clearly ambitious. Barely 20 years old, he established an entertainment company for emerging artists in 2020 and named it after himself, declaring his arrival on the scene.

Certainly, Heathers: The Musical, of which Old is creative producer and music director, is not afraid to aim high and be bold. 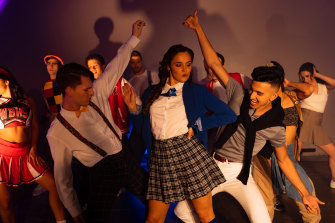 The production is pitched to its preferred audience of theatre-loving young people.Credit:Nicholas Gomez

This brash staging of the black comedy, based on the 1989 cult film, follows Veronica Sawyer (Tiegan Denina) as she falls in with the Heathers, the original high school mean girls (played by Sabrina Kirkham, Kira Leiva and Laura Dawson). When loner boyfriend J.D. (Jerrod Smith) manipulates her into murder, the horrors of high school become more sinister than ever.

This production is pitched at its preferred audience of theatre-loving young people. The show has a large and devoted fanbase, and Old’s company honours that by recreating beloved vocal riffs and choreographic motifs from the musical’s international productions (the company is performing the updated West End version, with songs and script changes that give Veronica more agency).

For those who just want to live inside Heathers: The Musical, it’s enough: When the Heathers arrive onstage for the first time and pose just so, the opening night audience erupted. 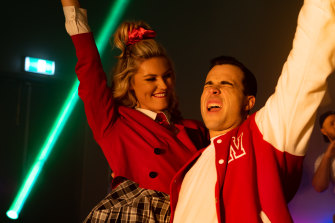 Directed by Jake Tyler in his musical theatre debut, the production features both amateur artists and professionals in their first blushes of commercial work. It’s more a playground for raw talent than a polished production: audio cues are missed or dropped; performers stumble on lyrics; occasionally they slip off-pitch.

For the first act, the cast seem to be chasing the music, which, like Tyler’s direction, moves at a punishing pace.

The actors jettison the back halves of words and prepositions in sentences to keep up; the result is a sense of breathless urgency. Sometimes it feeds nicely into the escalating stakes of the show, and sometimes it lands flat.

The irony and emotional complexity built into the book and lyrics plays too straight, too big and too mean here, but that’s to be expected in a show full of training and early-career artists: those critical instincts are often honed only with experience, and this is how one gets that experience.

Still, a charming energy fuels this Heathers to its (literally) explosive end. The cast makes big choices and makes them gamely; members look to each other on stage in clear appreciation and support. There’s a big heart under all that noise and collective ambition.