At around 8.40pm, the old man strode confidently on to the stage, casting aside his hitherto creakiness like a leper raised from his sick bed.

Suddenly, that purposeful walk turned into a steady jog. That jog became a sprint, which turned into a dash as he darted to collect the prize which had at times looked beyond his reach.

Joseph Robinette Biden Jr, for so long the nearly man of American politics, was able to introduce himself as the 46th president of the United States.

And after what seemed like an age, he finally spoke: ‘My fellow Americans…’

The tens of thousands of supporters who had gathered in this vast, industrial-sized car park on the outskirts of Biden’s home town of Wilmington, Delaware, whooped and cheered the man who has served them for more than three decades in the US senate. 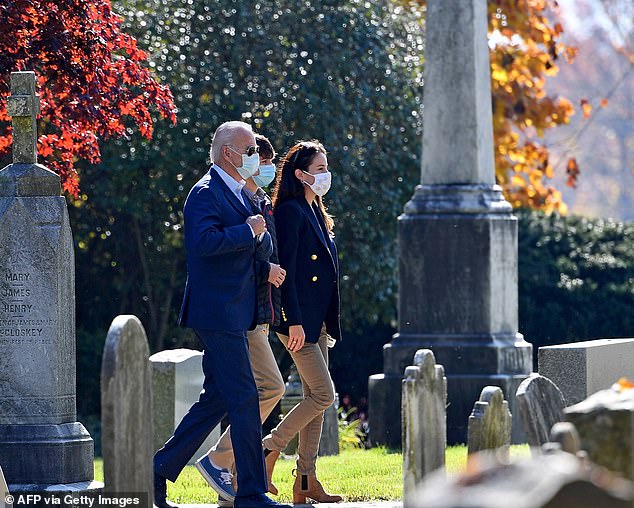 Joseph Robinette Biden Jr, for so long the nearly man of American politics, was able to introduce himself as the 46th president of the United States

He shot them a smile as broad as the Brandywine river. He could not have appeared more kingly had he been dressed in ermine. ‘The people of this nation have spoken,’ he continued. ‘They have delivered us a clear victory. A convincing victory. A victory for “We the People”.’

Indeed they had. Though this was certainly an unlikely setting to be unveiling the new leader of the free world.

A few days ago, life in this sleepy town, about a two-hour drive from Washington DC, felt about as exciting as dancing to no music.

It reminded me of a soulless commuter town somewhere off the M25. But shortly before 11.30am on Saturday, when it was announced that mighty Pennsylvania had finally turned blue, it transformed into the centre of the universe.

Men and women, young and old, hugged and kissed as a frenzy of optimism poured out into the streets.

There was a sense now, after four years of Donald Trump’s aggression, all would be better.

It won’t, of course. But they have to believe. That is the American way. By the stage where the newly anointed President was due to make his address, crowds gathered as early as midday.

At one point, as they broke into a syrupy rendition of God Bless America, a young blonde woman seized the opportunity to get down on bended knee and proposed to her girlfriend. New world indeed.

Elsewhere, almost everyone I spoke to had their own Joe Biden story. I met a woman called Pat whose mother Carla had been his housekeeper. And a young guy named Jose claimed to have once cut his hair.

Another man I met in Biden’s local watering hole, Iron Hill Brewery, remembered the President-elect visiting his primary school and looking hurt that none of the pupils knew who he was.

Their observations of Biden were universal. He was a ‘good guy, approachable’, a ‘well-mannered gentleman’ who ‘always tipped well’.

This sense of decency was reflected in Biden’s victory speech. He wants to ‘lower the temperature’ which has soared across the country during this most bitter of races to the White House.

‘We must stop treating our opponents as our enemy,’ he said. ‘We are not enemies. We are Americans.’

And special thanks were given to the African American community ‘who always have my back’.

He was certainly right about that. Way back during the early Democrat primaries, Biden’s campaign was so shambolic many thought he would withdraw. Only when the contest arrived in the densely black-populated southern states did he begin to gain traction.

This was by far his strongest performance of the campaign. As, of course, it should have been. Yet he is still no orator in the Barack Obama or Bill Clinton mould.

He stuttered at times. And those long pauses became wearying over the course of 15 minutes. Plus there was the inevitable gaffe to which he is worryingly prone. 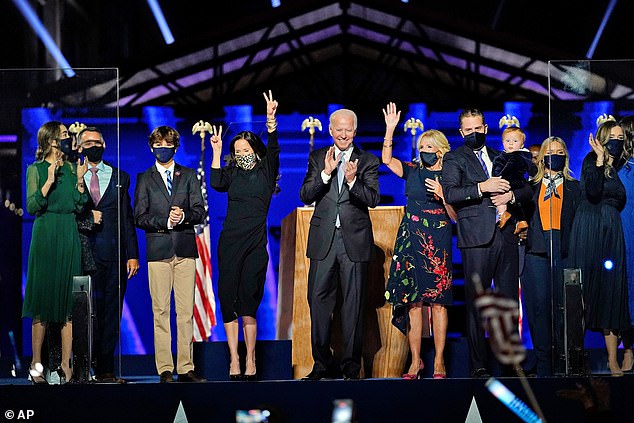 This sense of decency was reflected in Biden’s victory speech. He wants to ‘lower the temperature’ which has soared across the country during this most bitter of races to the White House. ‘We must stop treating our opponents as our enemy,’ he said. ‘We are not enemies. We are Americans’

At one point, he lamented the ‘230million’ lives the pandemic had claimed, before hastily correcting that number to ‘230,000’.

But will Miss Harris push for occupancy of the Oval Office, as many assume she eventually will, sooner rather than later? Spotting her and Biden backstage during an address the previous evening, I did not detect a huge amount of warmth between them.

Biden ended by issuing a challenge to the American people: ‘Let us be the nation that we know we can be,’ he urged the crowd, now whipped into a deafening crescendo.

Yet for all the ecstasy around me, this did not feel like the exciting ‘new dawn’ in American politics that Biden’s supporters and his friends in the liberal media want us to believe.

Their main man’s crab-like crawl over the finishing line on Saturday was not the definitive Trump-slaying many expected. The Republican party, if not Trump, will certainly have been buoyed by their performance in this election.

But as the person who will be handed the keys to every door in the world exited the stage, and as fireworks exploded over the Wilmington skies, a clear message rang out across the globe: America has spoken.