One shudders to think of the state of Boris Johnson’s barnet by April: HENRY DEEDES watches the Prime Minister lockdown statement in the Commons

Whenever the Prime Minister is about to hit us with sticky news he says ‘alas’ a lot. It’s his distress beacon, his warning siren that the Messerschmitts are swooping over the White Cliffs of Dover.

During his statement today to the Commons, where MPs had returned to vote on Lockdown Three, he barely stopped uttering it.

At one point, he hit us with two in two sentences. Alas, alas. We could have been in the stalls at Shakespeare’s Globe.

Boris insisted that the vaccine had turned our race against the virus from a ‘marathon into a sprint’.

But ‘alas’, its mutation meant emergence from our ‘lockdown cocoon’ would be a ‘gradual unwrapping’.

And ‘alas’, that might not be until the end of March. Alas indeed. 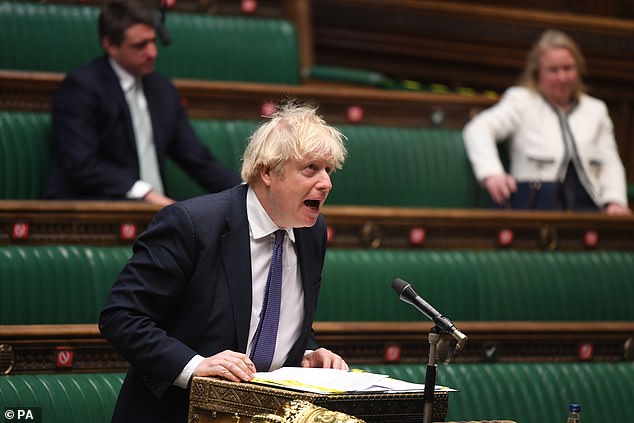 In his address to the House of Commons today, Prime Minister Boris Johnson (pictured) insisted that the vaccine had turned our race against the virus from a ‘marathon into a sprint’

That’s another three whole months of our nation’s coiffeurs downing scissors. One shudders to think of the state of the PM’s unruly mop then.

Yesterday it looked as though Carrie had emptied a plate of smashed vermicelli on his head.

The vote passed without too much rancour. That eye-popping Downing Street press conference on Tuesday, outlining the havoc wreaked by the pernicious new strain of the virus, saw to that.

As did the sad news yesterday that UK has now recorded more than 1,000 daily Covid deaths for the first time since April.

Still, that didn’t stop Sir Keir Starmer announcing – with all the munificence of a princeling pledging a kidney to a gin-soaked drunkard – that he would be supporting the government.

Labour’s leader – a former director of public prosecutions, don’t forget – gave Boris one of his customary dressing downs, accusing of him of being slow to act.

‘This follows a pattern,’ he intoned sternly. Shades of a prune-cheeked judge ticking off a serial miscreant. 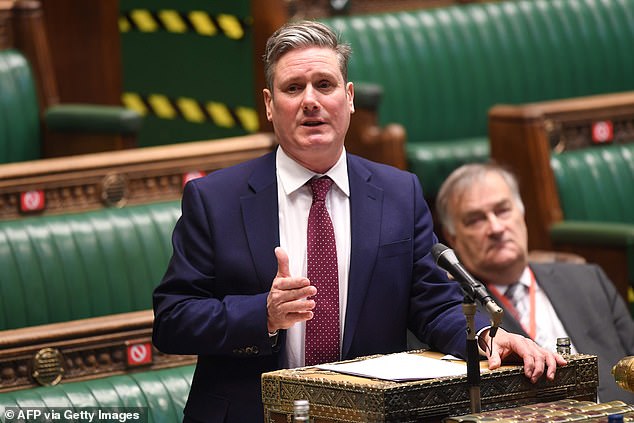 Labour’s leader Sir Keir Starmer – a former director of public prosecutions, don’t forget – gave Boris Johnson one of his customary dressing downs, accusing of him of being slow to act

There is a strange disconnect about Sir Keir. A cold aloofness. At least with Jeremy Corbyn you felt he was fighting for others, albeit a niche group of protesters with their megaphones and Thermos flasks. Starmer is like a batsman playing only for his own average.

Speaking of Jezza, he treated us to an appearance from his Islington checkpoint, a small safe positioned behind him.

What top-secret communiques does he keep in there? ‘Probably not the nuclear codes,’ chuntered a Westminster wag.

Comrade Corbyn was demanding free broadband access for all. He was back in crotchety mode, though I’m not sure why.

Considering the amount of time he’s had to tend to his allotment this past year, next season’s marrows should be the size of hoggets.

For the rest of the afternoon, Tory backbenchers umm-ed and ahh-ed in quiet acquiescence.

Most saw the need to lock the country down – but only for the time being. We heard the phrase ‘heavy heart’ bandied about quite a bit.

The stately ornament that is Sir Graham Brady (Con, Altrincham) said that if lockdown was to go on until the end of March, votes extending it needed to be held at the end of each month.

Boris offered a breezy reassurance that he probably wouldn’t let it go on as long as that. Sir Graham responded with a stony glare as if to say: ‘I’m not falling for that again’.

The PM’s face dropped as though being sucked down a plughole. This image of him as a snatcher of personal liberties wounds him. ‘Pettifogging, yes,’ he replied. ‘Malice? No.’

Liam Fox (Con, N Somerset) pointed out that effective delivery of the vaccine was dependent on numbers.

That meant volunteers. When he, Dr Fox, had offered his medical skills to the NHS, he was told he’d have to undergo courses in ‘equality, diversity and human rights’ and ‘moving heavy loads’.

Boris agreed that was bonkers. He promised to put his Health Secretary Matt Hancock on to it.

‘Put Matt onto it’, you suspect, is a common refrain around Downing Street. Especially when Dilyn needs walkies.

Nitwit of the afternoon was Pete Wishart (SNP, Perth), who asked whether Boris ever wished he possessed Nicola Sturgeon’s leadership skills. Never let it be said the SNP aren’t taking this pandemic seriously!

There was a corking speech late on from Sir Charles Walker (Con, Broxbourne) who warned some people were likely to snap under further restrictions. For that reason, he would not be voting for the Government.

As Sir Charles spoke, police in Parliament Square led away a gaggle of angry lockdown protesters. This is going to be a difficult three months.