There are new royal baby updates, and it’s all pretty exciting. According to a report published by People on Monday, Meghan Markle opened up about her baby’s sex after a young fan asked. In fact, the Duchess of Sussex answered several questions about the couple’s first baby-to-be while on a royal walkabout with Prince Harry in the town of Birkenhead, Merseyside. The appearance was the royal’s first public engagement of 2019, and the soon-to-be parents were in town to meet with local organizations and support groups, according to People. Plus, the considerate couple set aside time to meet with the locals.

Kitty Dudley, a 9-year-old from a nearby primary school, had the opportunity to ask Markle about the baby. "Meghan came up to me and asked me how old I was and where I went to school," Dudley told People. She continued,

Prince Harry and Markle haven’t revealed the baby’s sex just yet, and it looks like it will be as much of a surprise to the royal family as it will be for fans. 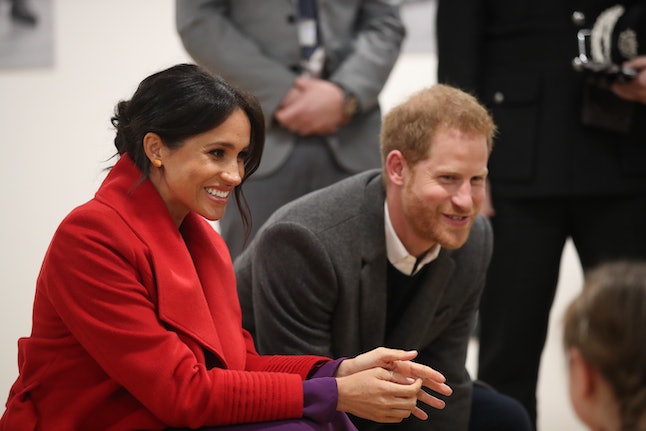 While the Duke and Duchess of Sussex might not find out if the baby is a boy or a girl until the due date, Prince Harry has previously suggested a daughter would be nice. In October, Prince Harry revealed he would like the baby to be a girl during a cycling event at the Invictus Games in Sydney, according to Cosmopolitan. A fan yelled "I hope it’s a girl" from the sidelines, to which Harry responded, "So do I!"

Markle and Prince Harry did answer a few other pressing baby questions during the visit. Markle revealed her due date would be in late April, saying she was about six months along to a group gathered on the walkabout, according to People. The initial baby announcement issued by Kensington Palace on Twitter did not specify a due date, writing simply,

The couple also discussed baby names while in Birkenhead on Monday, after another young fan reportedly asked Markle if she had names picked out. The fan recalled, “I asked her whether she would call her baby Amy if she has a girl and she said, ‘That’s a really pretty name, I like it, we’ll have to think about it.’" The newlywed royals haven’t revealed any potential names of their own, though Prince Harry did joke about liking the name Harriet, according to Elle. And the couple will also have plenty of options. In October, the Duke and Duchess of Sussex were reportedly given a list of potential baby names by friends and family, as reported by the Telegraph.

Markle and Prince Harry may not want to find out if their baby is a boy or a girl just yet, but odds are these two have some special names picked out either way. The couple is unlikely to share too many more baby details beforehand, but the surprise will make the occasion even more exciting for friends, family, and fans.