Hostess’ "Sweetennial" Birthday CupCakes Are A Celebration Of A Big Milestone

If you know me at all, you’re probably somewhat aware of the fact that I love celebrating birthdays more than just about anything, whether it’s for myself, for my mom, or in honor of my BFF’s cat. And to throw down for Hostess’ 100th birthday (I know, it’s unbelievable!), the brand is doing what they do best, by making a super sweet and colorful treat for everyone to enjoy. So if you haven’t already caught a glimpse of Hostess’ "Sweetennial" Birthday CupCakes, they’re a superb and sugary way to celebrate the brand’s big day.

To honor Hostess’ 100th year running, which the brand comically refers to as The "Hostess Sweetennial”, the massively popular baked goods brand has released appropriately named Birthday CupCakes, according to a Feb. 19 press release from Hostess. They maintain the ~lewk~ and taste of anyone’s ideal birthday cake, and to be completely honest, I can’t wait to get my hands on some for myself.

The base of Hostess’ Birthday CupCake consists of golden vanilla cake with colorful rainbow sprinkles baked inside. The top is smothered in creamy vanilla icing, and all of that is sprinkled with even more rainbow sprinkles (because why the heck not?). It also includes what the brand refers to as "The Original Squiggle." They are now available at grocery stores nationwide as a single-serve treat, in an 8-piece multi-pack for $2.99, or you can get them in a special variety pack with Chocolate CupCakes at Sam’s Club for $7.98. But a fabulous birthday treat is totally priceless, if you know what I mean. 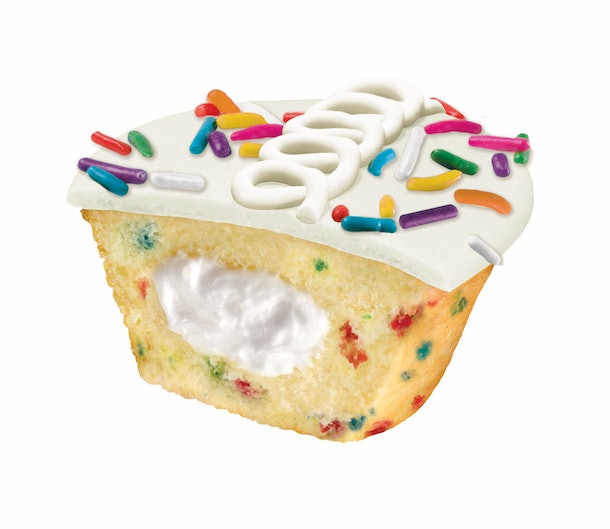 As you probably know by now, birthdays don’t last forever, and unfortunately, neither do these special confections. According to the brand, Hostess’ Sweetennial Birthday CupCakes will only be around until March 17, or when they sell out. Per the release, they are part of Hostess’ yearly CupCake Craze, which feature a super wide variety of limited-edition flavors. This year, alongside the Birthday Cupcakes, Hostess will also reintroduce Hostess Mint Chocolate CupCakes as well as Hostess Strawberry CupCakes, and both are basically guaranteed to be my first choice springtime treat. If you constantly crave Hostess Chocolate, Golden, and Orange CupCakes, on the other hand, you’re in luck — those are available for all 365 days of the year.

Keith Peterfeso, Hostess’ Brand Director, said the baked goods brand is releasing these special CupCakes to celebrate their 100th birthday with fans nationwide, according to the press release. So what better way to do so than by sharing their birthday cake with fans across the country?

According to the press release, Peterfeso said: 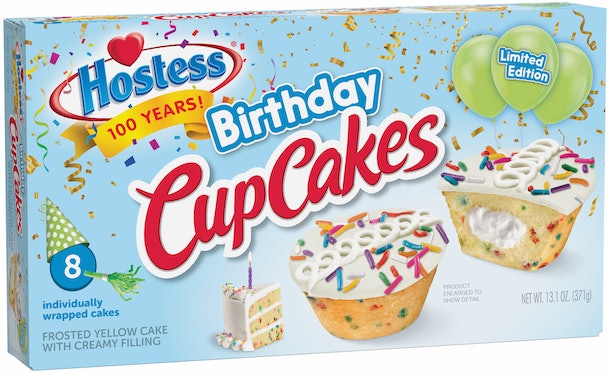 Whether you’re bringing your bestie a sweet treat in honor of his or her b-day, or if you’re simply just trying to eat birthday cake on any given day (#relatable), Hostess’ Sweetennial Birthday CupCakes are coming in clutch for 2019. IMO, very few things can surpass a funfetti-style cake, so if you need me, I’ll be snacking my troubles away. *Burst of confetti.*