Are Covid-19 rules creating a fare dodgers’ paradise? Passengers bemoan buying on tickets that aren’t ever checked – but loophole allows them to claim refunds on digital tickets which could cost networks millions

When the country went into lockdown in March to curb the spread of coronavirus, rail companies across Britain scaled back its number of ticket inspectors on trains to protect staff and travellers from possible contamination.

But with children back at school and many people no longer working from home, returning passenger numbers are slowly on the rise – but some claim they’re yet to see a ticket inspector on their route.

Last month industry body the Rail Delivery Group announced timetables are increasing to around 90 per cent of pre-lockdown levels.

But while some rail networks, including East Midlands Railway, Northern and Merseyrail, have reintroduced inspectors to their trains, a number continue to operate without due to social distancing rules.

And customers have taken to social media to complain that they’re paying for tickets which aren’t being checked, while others exploit a loophole that allows them to claim refunds on digital tickets they haven’t downloaded to their mobile device. 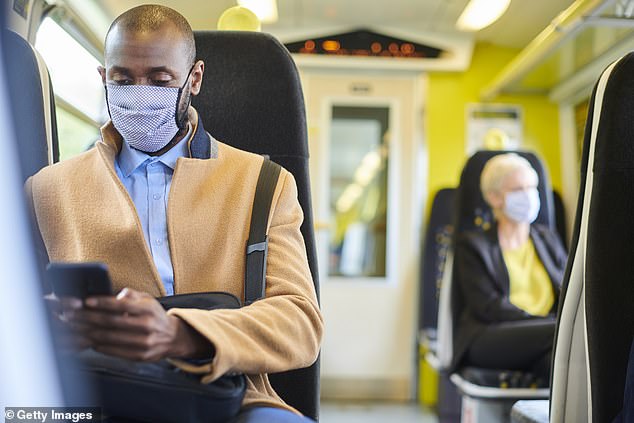 With children back at school and many people no longer working from home, returning passenger numbers are slowly on the rise – but some claim they’re yet to see a ticket inspector on their route

It comes two weeks after the Department for Transport (DfT) announced rail franchising has been ‘ended’ by extending measures introduced to keep trains running after Covid-19 – meaning the taxpayer is set to be landed with a bill of more than £3.5billion to prop up the rail network until 2022.

Billions have already been spent to maintain the railway network since March after passenger numbers plummeted to a fraction of pre-pandemic levels. This drop made it financially impossible for private companies to run services.

Now some passengers are concerned the rail companies could be losing more money by failing to check people aren’t fare-dodging and are travelling with the right tickets.

It was estimated, before the pandemic, that fare dodging cost the railway around £200million every year – money which could otherwise be spent investing to improve services.

Last week a representative for ScotRail tweeted: ‘Our staff haven’t been checking or selling tickets since March. The rules are clear and unless exempt everyone should be wearing a a face-covering while travelling on one of our services.’

On September 26, London North Eastern Railway (LNER) tweeted that ticket checks were only reintroduced in the past fortnight. Last Monday, Southeastern tweeted: ‘Conductors and On-board Managers are still on trains performing operational duties, but for social distancing reasons they are not required to walk through the train as they previously used to.’ 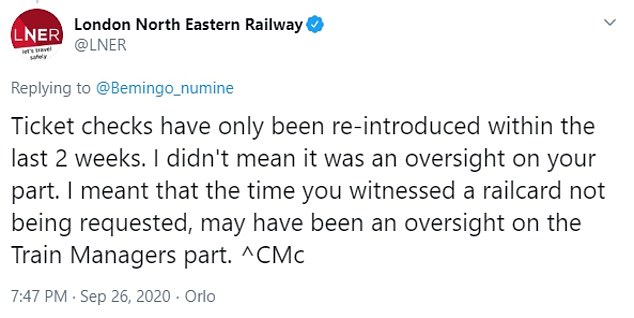 While some rail networks, including East Midlands Railway, Northern and Merseyrail, have reintroduced ticket inspectors to their trains, a number continue to operate without

Passengers have certainly noticed the absence of inspectors on some routes, with many taking to social media to complain their tickets hadn’t been checked on multiple occasions.

Twitter user Morgan, from Manchester, tweeted late last month: ‘Nothing I hate more spending £20 on a train ticket for no one to check it.’

Last week Twitter user Day moaned: ‘On my 5th train journey in say the last two months… Not one ticket inspector, yet £200 in tickets, not sure if I’ve been lucky or stupid for buying a ticket.’ 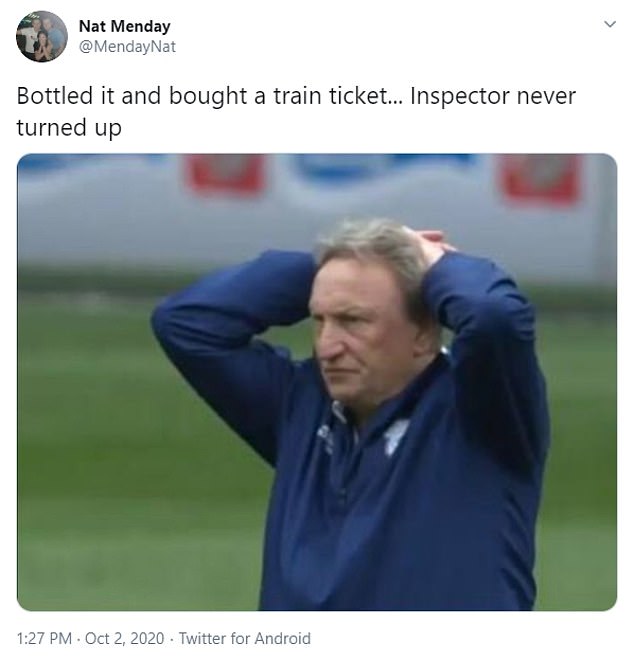 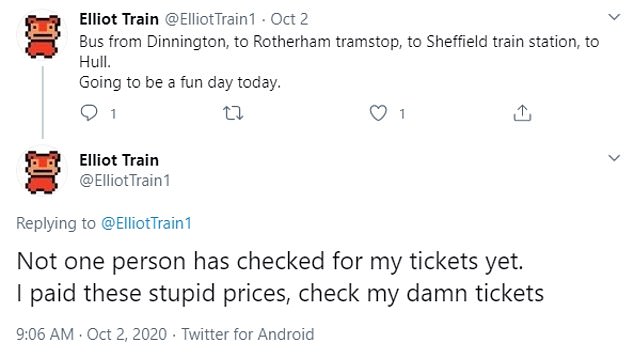 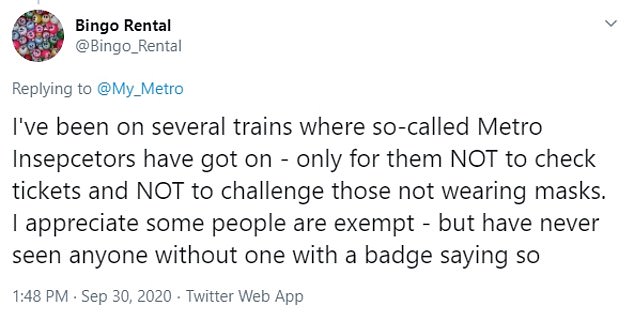 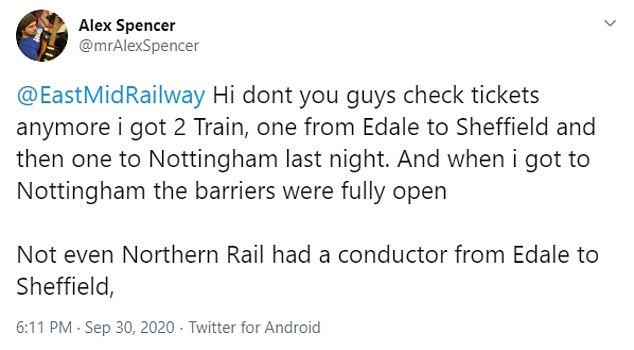 Passengers have certainly noticed the absence of inspectors on some routes, with many from across the country taking to social media to complain their tickets hadn’t been checked on multiple journeys

And on Friday, user Elliot Train, from Sheffield, wrote: ‘Bus from Dinnington, to Rotherham tramstop, to Sheffield train station, to Hull… Not one person has checked for my tickets yet. I paid these stupid prices, check my damn tickets.’

Others suggested a lack of ticket inspectors was leading to an increasing number of fare dodging. Heart 70s radio presenter Carl Emms tweeted last month: ‘Since I returned to London a couple of weeks back this has been a frequent issue.

‘Not once on any of my trips has an Avanti member of staff checked tickets or walked through the train. Free for all. Very disappointing.’

Meanwhile some travellers admitted to taking advantage of a loophole enabling them to apply for refunds for journeys they took where the tickets weren’t checked. 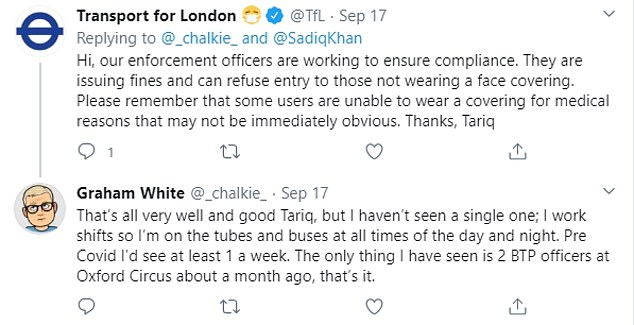 Some argued they’d taken multiple journeys and not seen a single ticket inspector. while others asked why they weren’t working to enforce mask wearing

Twitter user Anish Mistry tweeted he had spent £50 on a ticket but was not approached by a conductor.

Having booked through Trainline, he then revealed he had applied for a refund despite having completed the journey.

The rules allow a refund on selected tickets if they’ve not been used, and if the ticket hasn’t been downloaded to be scanned or checked by an inspector then it looks as if the passenger has not travelled.

It led to a discussion thread on the social media site where other users confessed they had done the same.

Christopher Carson, from Yorkshire, tweeted: ‘Got a refund on mine this morning ££££.’ 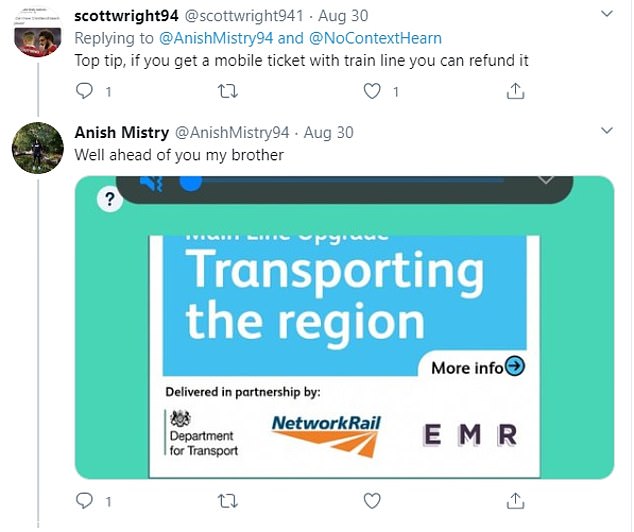 Twitter user Anish Mistry tweeted he had spent £50 on a ticket but was not approached by a conductor. Having booked through Trainline and downloaded a mobile ticket, he then revealed he had applied for a refund despite having done the journey

Most train services in Britain have operated as franchises since the railways were privatised around 25 years ago.

Femail has reached out to all British train operators for comment. Jacqueline Starr, Chief Operating Officer at the Rail Delivery Group which represents the rail industry, said: ‘Everyone who uses the railway needs a ticket to travel or they risk receiving penalty fares or being prosecuted.

‘The impact of coronavirus means rail staff are taking extra steps to protect themselves and others but ticket checks are still being carried out at stations and on trains.

‘The small minority who fare dodge deprive the railway of millions of pounds every year, money which could otherwise be spent investing to improve the railway for everyone or go back to government to help fund the NHS and other vital public services.’

RDG explained that, to reduce contact and risk to rail workers and passengers, ticket checks are being carried out in slightly different ways depending on the type of service. There is currently a greater focus on checks at stations where there is more space.

Staffed ticket barriers remain in operation at the busiest stations with further checks being carried out by staff at other stations. Revenue protection staff onboard trains continue to operate but observe social distancing by inspecting tickets visually or with contactless scanners.

The group added that refund checks are routinely carried out and fraudulent claims will be followed up and legal action taken to reclaim the money.

Siwan Hayward, TfL’s Director of Compliance, Policing and On-street Services, said: ‘We take fare evasion extremely seriously and our teams of revenue inspectors operate across the whole network every day, using new technology and intelligence to identify anyone travelling without a ticket or face covering.

‘Fare evasion is a serious criminal offence that could lead to prosecution, a criminal record, a fine of up to £1,000 and can have profound consequences.’