From hairstyles to dress designers, royal style influenced every aspect of the Golden Globes red carpet.

Stars including Julianne Moore, 58, and Rosamund Pike, 39, plumped for gowns by Givenchy, the Duchess of Sussex’s go-to designer.

Meanwhile others took their fashion cues from Meghan’s royal tour wardrobe, with three different celebrities stepping out in dresses by THEIA, a label the mother-to-be wore in Fiji.

Others found inspiration in Kate’s polished looks, with Big Little Lies star Nicole Kidman, 51, finishing her chic updo with one of the royal’s favourite accessories: a velvet bow. 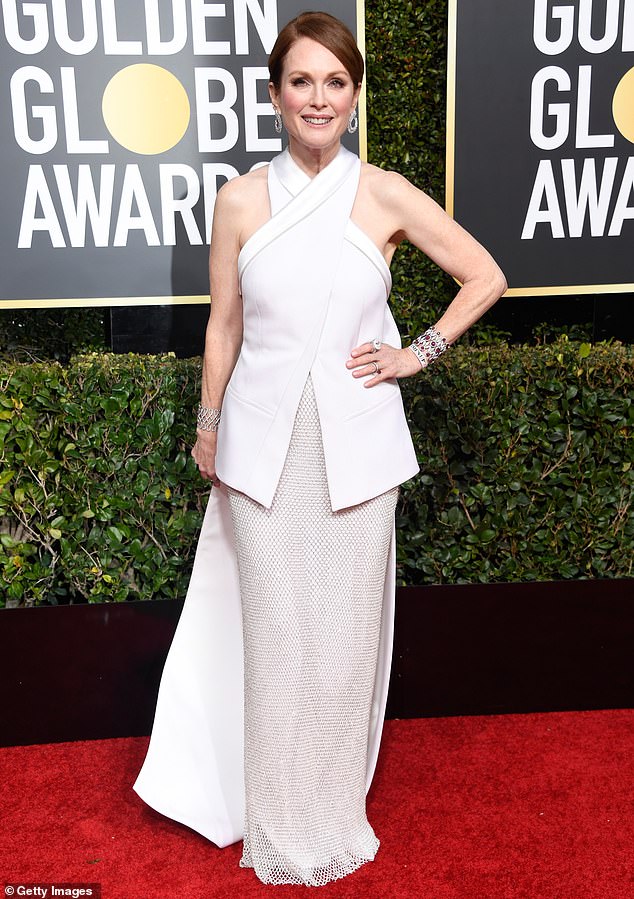 Meghan’s favourite label: Stars including Julianne Moore, 58, pictured on the red carpet, and Rosamund Pike, 39, plumped for gowns by Givenchy for the Golden Globes on Sunday

Duchess’ go-to: Meghan, 37, enlisted Clare Waight Keller of Givenchy to design her wedding dress and has worn the label a number of times since. Pictured, the duchess in Givenchy at Princess Eugenie’s wedding in October, left, and at her first solo engagement in London, right 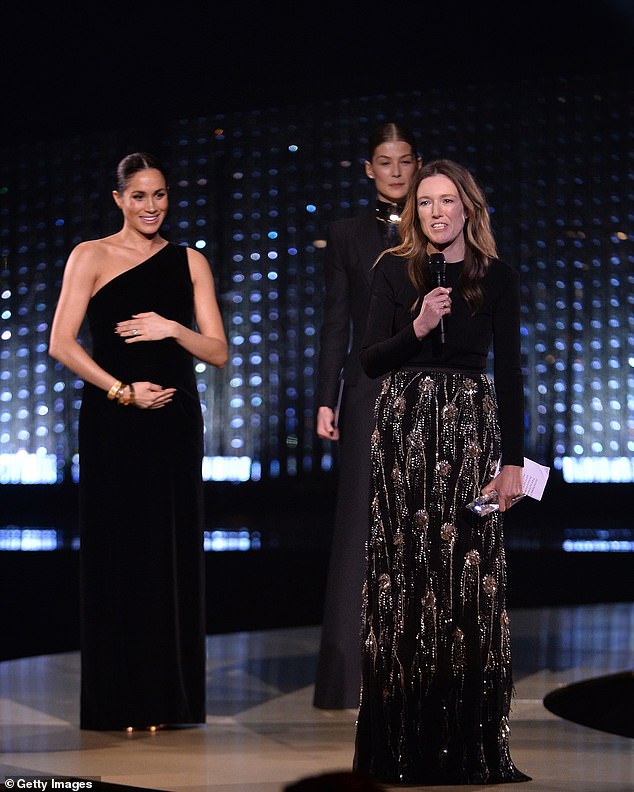 Firm friends: Meghan even made a surprise appearance at the British Fashion Awards in London last month to present Waight Kelller, seen with microphone, with an award

The Duchess of Sussex, 37, enlisted Givenchy’s Clare Waight Keller to design her wedding dress, and the pair have formed an extraordinarily close bond since.

Indeed Meghan – who has worn Givenchy on a number of high profile royal engagements – made a surprise appearance at the British Fashion Awards in London last month to present Waight Kelller with the prestigious British Womenswear Designer of the Year award.

The gong was given in recognition of a standout year for the fashion house.

It is clear Meghan is far from the only fan of the designer, with Moore and Pike – both longtime fans of the label – both opting to wear their gowns. 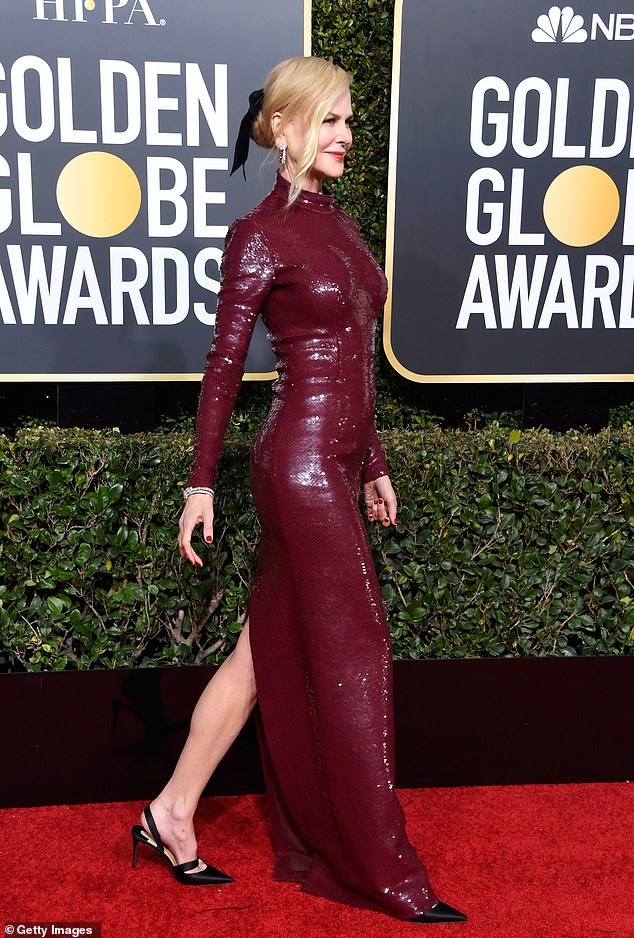 Finished with a bow: Big Little Lies stars Nicole Kidman, 51, finished her chic updo with one of the Duchess of Cambridge’s favourite accessories: a velvet bow 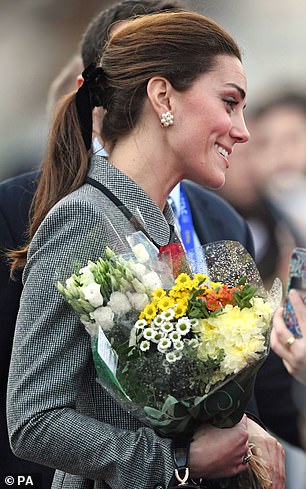 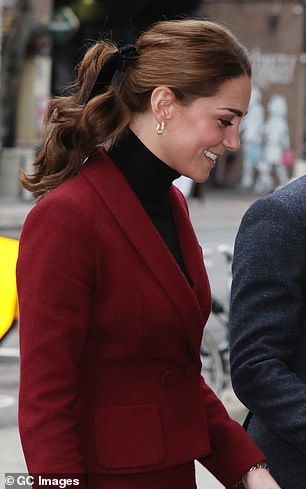 Fashion forward: The Duchess of Cambridge, 36, has won praise for her newfound fondness of hair ribbons. Pictured, in Leicester in November (left) and in London that same month, right

The Duchess of Cambridge, 36, has won praise for her newfound fondness of hair ribbons – and A-listers have been quick to follow the trend.

The accessory has sprung up all over runways in recent seasons and has been adopted by the likes of Sienna Miller and Margot Robbie.

Meanwhile Kate sported the style on a number of occasions in the latter half of 2018, including on a visit to Leicester in November.

On Sunday Oscar-winner Kidman became the latest leading lady to try out the style – placing a large black velvet bow above her low chignon.

Kidman, who attended the awards show with husband Keith Urban, has divided opinion with the bow – with some questioning its placement. 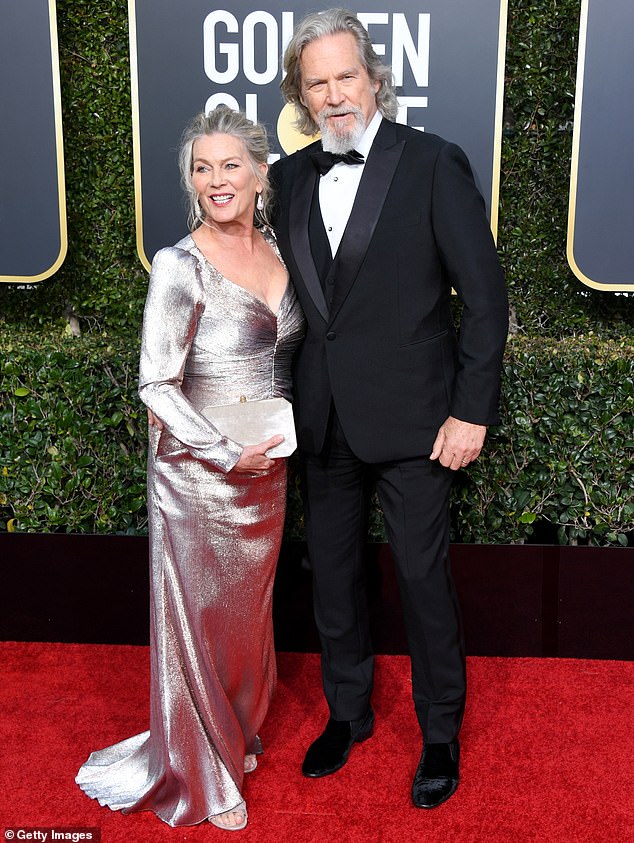 The Meghan effect: Among the brands to enjoy a boost from Harry and Meghan’s royal tour was New-York based THEIA. Pictured, Jeff Bridges poses with wife Susan Geston, in Theia 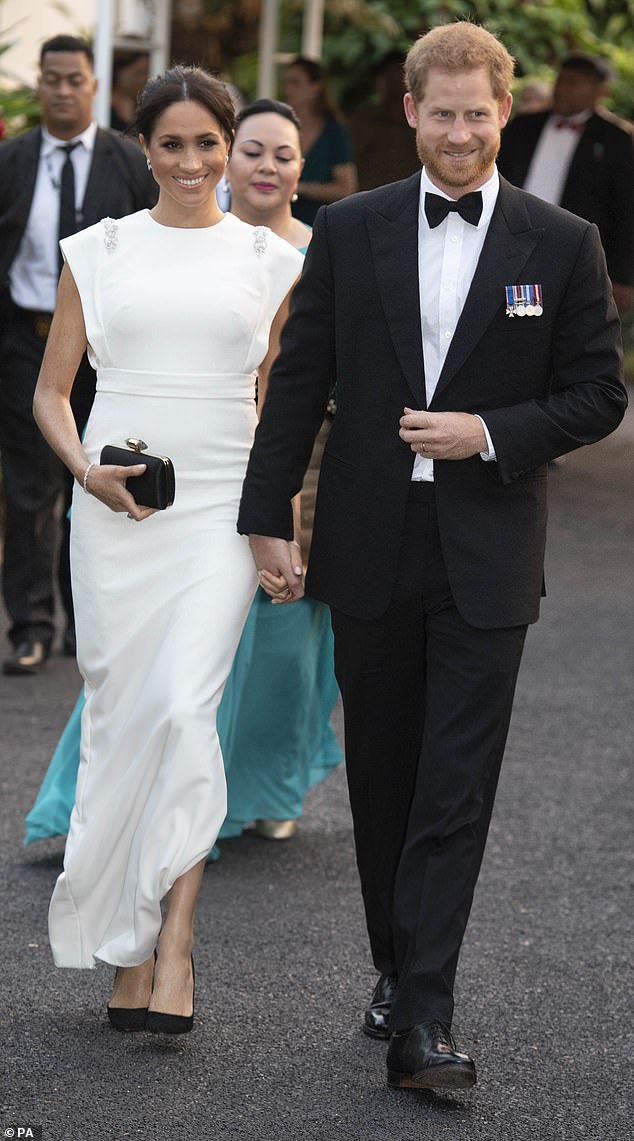 Stunning: Designer Don O’Neill, 52, created the white dress Meghan, 37, wore as she joined Prince Harry, 34, for a black tie reception with the King of Tonga at Nuku’alofa’s Royal Palace

Among the brands to enjoy a boost from Harry and Meghan’s royal tour in October last year was New-York based THEIA, which dressed the duchess for a formal dinner in Tonga.

O’Neill – who made headlines when he hinted his team was told of the royal baby news ahead of the official pregnancy announcement – followed up on the high profile appearance by dressing a number of women for the Golden Globes. 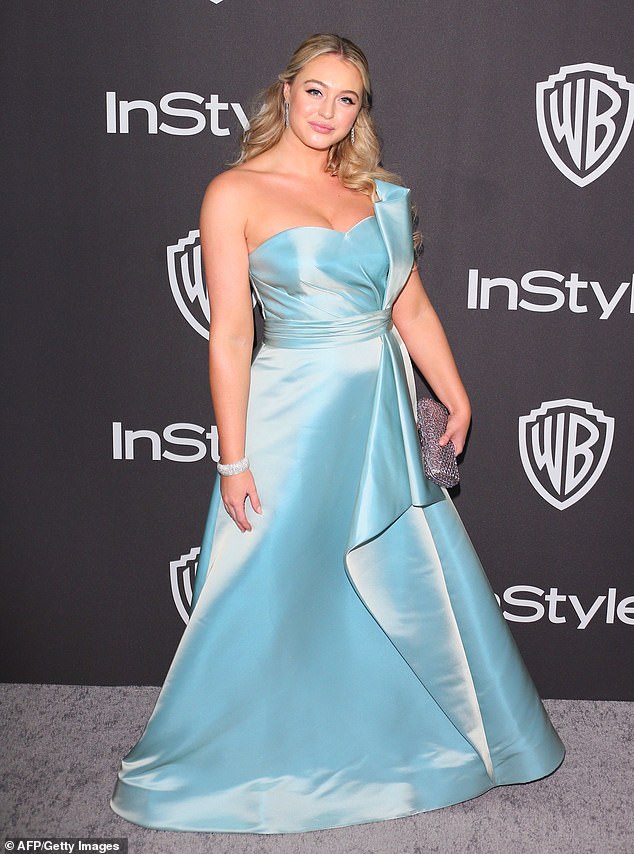 Ready for the ball: Meanwhile British model Iskra Lawrence looked every inch the fairytale princess at the InStyle After party in a timeless $1,195 (£940) ice blue gown from the label

Among them was Susan Geston, who has been married to Jeff Bridge’s for 41 years.

Meanwhile British model Iskra Lawrence looked every inch the fairytale princess at the InStyle After party in a timeless $1,195 (£940) ice blue gown from the label.