Now that’s a veg curry! Michelin-starred Indian chef Atul Kochhar dishes up sensational meat-free curries from around the world in his new cookbook 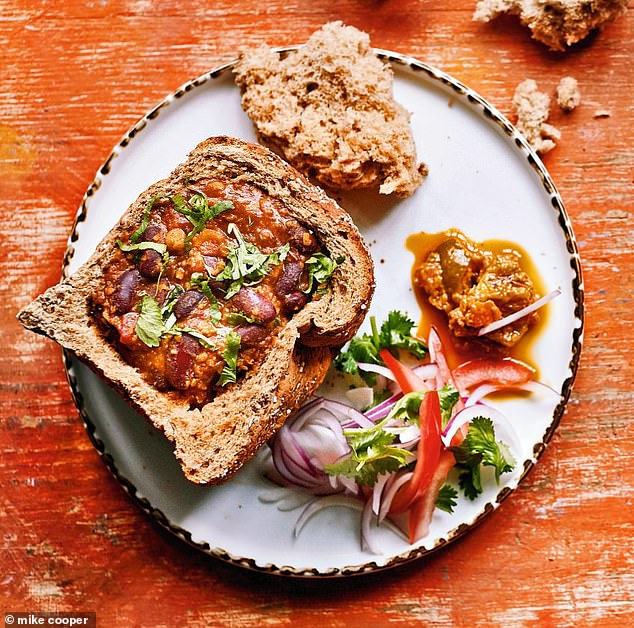 This is my vegetarian version of South Africa’s popular dish. Originally from Durban, culinary legend maintains it grew out of the need for cheap food during the Great Depression. Indian South Africans were known as ‘banias’ and the name of Chinese stir-fries always had ‘chow’ at the end, so this dish was first known as Bania Chow, which became Bunny Chow.

If using dried soya mince, rehydrate it first: cover in freshly boiled water and soak for 15 minutes until tender. Drain and rinse in cold water.

Heat the oil in a saucepan over a medium-high heat. Add the cinnamon bark, cardamom pods, bay leaf and star anise and fry, stirring, until aromatic. Add the cumin and fennel seeds and stir until they crackle. Add the onion and garlic and stir until translucent.

Add the curry powder and stir for 30 seconds. Add the soya mince and stir for 4 minutes until it loses its raw appearance. Stir in the kidney beans and chickpeas, tomatoes, water, ginger and curry leaves with salt to taste. Boil, then reduce the heat.

Simmer for 10 minutes until the sauce has thickened and the beans are tender. Stir in the coriander and lime juice. Spoon into the hollowed bread and serve. TIP: If using dried pulses, you need to soak and cook them before adding to the recipe at the same point you add the tinned versions. For the beans, rinse 200g dried kidney beans, cover with cold water and soak overnight.

To cook, drain them, place in a pan and add salted water to cover. Boil for 10 minutes, skim the surface. Add 1 green chilli, split lengthwise, and a 2.5cm piece of fresh ginger, peeled. Reduce the heat, cover and simmer for 50 minutes until tender, then drain.

For the chickpeas, rinse 200g split dried brown chickpeas (channa daal), cover with cold water and soak for 20 minutes, drain and transfer to a pan. Cover with water and bring to the boil, skimming the surface. Cover and simmer for 20 minutes, then drain.

A rich Iranian classic dish, flavoured with walnuts and pomegranate and a hint of cinnamon. This is my vegan version. Preheat the oven to 220°C/fan 200°C/gas 7. Put the squash on a baking tray lined with baking paper. Drizzle with oil and lightly dust with ½tsp cinnamon. Shake the tray to coat. Roast for 20 minutes or until tender.

Heat a non-stick frying pan over a medium-high heat. Add the walnuts and toast, stirring until lightly browned. Cool, then whizz in a food processor until finely ground. Set aside.

Heat 2tbsp oil in a pan over a medium-high heat. Add the garlic and onion and fry, stirring often, until starting to soften. Add the cinnamon bark and continue frying until the onions are light brown.

Stir in the cumin, turmeric and ½tsp ground cinnamon, and stir for 30 seconds. Add the chickpeas, pomegranate juice and molasses, a pinch of salt and pepper and a good grating of nutmeg. Increase the heat and bring to the boil, stirring.

Add the squash cubes and ground walnuts and return to the boil, stirring until it thickens. Add the zest and enough water to get the thickness you like.

Taste and adjust the seasoning. If you think it’s too sour add maple syrup to taste. Stir in the pomegranate seeds, garnish with parsley or coriander and serve with flatbreads.

Serves 4 as a sharing dish 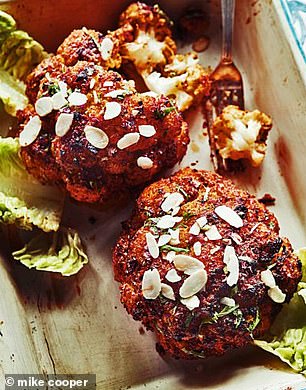 For the chermoula sauce

Preheat the oven to 200°C/fan 180°C/gas 6 and line a roasting pan with baking paper, making sure the baking paper comes up the side of the pan. To make the chermoula sauce, combine the garlic, olive oil, honey, ground cumin seeds, paprika, black pepper, lemon zest and a pinch of salt in a bowl.

Whisk in the lemon juice, then add three-quarters of the coriander leaves. Place the cauliflower upside-down in the bowl and spoon the chermoula sauce over. Use your hands to rub the sauce all over the cauliflower.

Push any leftover sauce into the gap between the central core and florets on the bottom – you don’t want to lose any of that flavour.

Transfer the cauliflower, rightside up, to the roasting pan. Pour over any chermoula sauce remaining in the bowl and cover with foil, pressing the foil around the cauliflower. Place in the oven and roast for 30 minutes.

Uncover the pan and continue roasting for a further 25 minutes, or until the cauliflower is tender and slightly charred. You should be able to slide a knife into the core easily. Sprinkle with the remaining coriander and the toasted almonds. Serve with lettuce leaves on the side.

The recipe comes from the Indian state of Odisha, where it is made to feed Hindus on pilgrimage to the local temples. Panch phoron spice blend is made up of equal quantities of cumin seeds, fennel seeds, fenugreek seeds, onion seeds and radhuni, a Bengali spice. 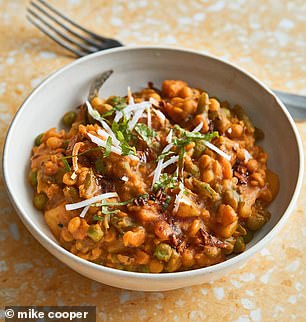 For the tarka (seasoning)

Rinse the split yellow peas and split yellow mung dal and soak them individually in enough cold water to cover for 20 minutes. Drain, then transfer to a lidded pan with plenty of water and a pinch of salt. Bring to the boil, skimming the surface.

Cover and simmer for 15 minutes, until tender. Add the veg. Grate the ginger in, then add the turmeric. Stir in enough cold water to cover the veg, if necessary.

Cover, boil, then reduce the heat and leave to bubble for 7 minutes, or until the veg are tender. Mash some of the pulses and veg against the side of the pan to thicken the stew.

To make the tarka, heat the oil in a frying pan over a high heat. Add the asafoetida and stir until it foams and subsides.

Add the bay leaf, chilli, cumin and panch phoron, and stir until the seeds crackle and pop. Pour into the stew. Bring to the boil, taste and adjust the salt, and serve garnished with chilli powder, coconut and chopped coriander.

I doubt many Japanese cooks would start a katsu curry sauce by frying red chilli and shallot, but I wanted to intensify the flavours. You can make both the curry powder and sauce in advance. Serve with plain sticky rice and Japanese pickled vegetables, if you like. 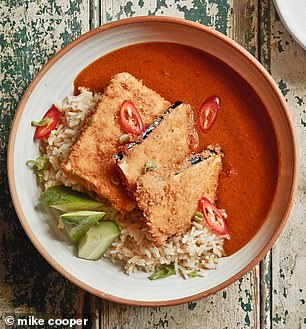 For the katsu curry sauce

To make the curry sauce, heat the oil in a pan over a medium-high heat. Fry the red chilli and shallot, stirring for 30 seconds to flavour the oil. Reduce the heat to medium and stir in the tomato purée.

Add the curry and garlic powders. Stir for about 30 seconds to cook the spices. Stir in the stock and coconut milk with a pinch of salt. Add the flour paste and slowly bring to the boil, stirring, until the sauce thickens and coats the back of the spoon. Remove from the heat and set aside.

When you are ready to cook, preheat the oven to 150°C/fan 130°C/gas 2 and line a baking tray with kitchen paper. Put the breadcrumbs in a shallow bowl, add the cayenne pepper, sesame seeds, if using, turmeric and a little salt, and mix.

Put the flour paste in another bowl. Using tongs, take one piece of tofu or aubergine and run it through the flour paste to coat, then toss in the breadcrumbs. Repeat with all the pieces.

Heat enough oil for deep-frying in a heavy-based saucepan until it reaches 180°C. Add as many tofu pieces as will fit and deep-fry until golden brown. Using a slotted spoon, remove to the lined tray and keep hot in the oven.

Repeat with the aubergine pieces. Just before serving, reheat the sauce. Divide the tofu and aubergine between 4 plates and add some sauce. Garnish with chillies and spring onions, and serve with sticky rice.

Pad Thai must be one of the most universally popular Thai dishes. This vegan version takes me back to Bangkok’s food stalls – the vibrancy of the scene is as exciting as the delicious flavours. 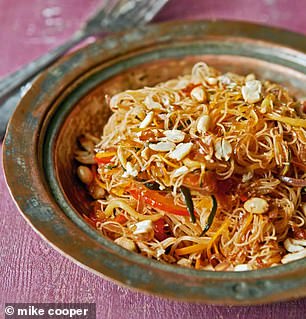 For the pad Thai sauce 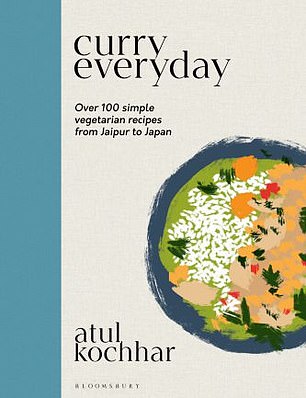 First, make the pad Thai sauce by mixing all the ingredients together with 2tbsp water. Set aside. Heat 2tbsp of the oil in a large wok over a high heat. Swirl it around the wok to coat the base.

Add the carrots, courgettes, red peppers, onion, galangal (or 1cm ginger, chopped) and half the lemongrass, and stirfry until the veg are tender. Tip the veg out of the wok and set aside.

Drain the noodles well. Wipe out the wok, then heat over a mediumhigh heat. Add the remaining 1tbsp oil and swirl around. Add the rest of the lemongrass and the chopped 2cm of ginger and stir-fry for 1 minute.

Add the noodles with the pad Thai sauce, then add the veg and stir-fry until the noodles are tender.

Remove from the wok, using a spoon and fork to separate the noodles. Garnish with peanuts, basil and coriander, if using, and serve.