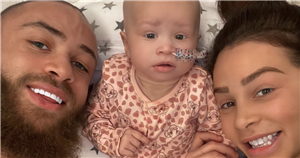 Ashley Cain and Safiyya Vorajee have been going through unimaginable pain after being told their eight month old daughter Azaylia could have only "days to live".

The strong unit have made headlines over the past year with their difficult journey after their daughter was diagnosed with leukaemia at eight weeks old and has battled the cancer ever since, with a number of failed treatments.

After raising more than £1million to try and get her help at a specialist clinic in Singapore for a CAR-T therapy and a haplo transplant, the pair heartbreakingly revealed that she developed further tumours and there was nothing more doctors could do for her.

With all they've been through together, here's everything you need to know about the Ex On The Beach star and his gorgeous girlfriend…

Who is Ashley's partner Safiyya Vorajee?

Safiyya was born 16 August 1987 and is an aesthetic practitioner, dermal filler and registered nurse who runs her own brand Mz Pretty Cosmetics.

Before founding her own company, the brunette beauty worked as a hairdresser and colourist at Barrie Stephen Hair Salons.

In the bio of her Instagram, which is specifically for her hairdressing skills, she described herself as a "master colour technician".

How did Ashley and Safiyya start dating?

The couple started their whirlwind romance back in 2017, but waited to go Instagram official until January 2018 as Safiyya shared a black and white image of them together looking dressed to impress.

In the snap, Safiyya looks gorgeous in a black blazer-style wrap dress with flared cuffs, which she paired with some strappy heels and a Louis Vuitton bag. Ashley looked dapper in a pair of checked trousers and a matching blazer alongside a crisp dark shirt.

At the time, she captioned the snap: "He has bought so much happiness to my life and I couldn't imagine life without him love you #love #happiness #2018," [sic] followed by three red heart emojis. How many children do they have together?

Ashley and Safiyya have one daughter, Azaylia Diamond, together.

Reality star Ashley announced the news that they were expecting their first child together back in early 2020 as he shared a gorgeous photo of them on his Instagram feed.

The picture sees Safiyya wearing a stunning off-the-shoulder camel-coloured top with mesh sleeves as she holds up an ultrasound scan in her hand, while Ashley wears a Givenchy black T-shirt and smiles for the camera.

Clearly ecstatic by the news, he wrote: "Ohhhh shiiiiiiii #BabyCain," [sic] with a baby emoji and a red heart emoji.

Azaylia was born on 10 August 2020 weighing 7lbs 10oz at 06:56 in the morning, Ashley announced on his social media feed. At the time, he told his followers: "There is no words to describe this feeling. But she has opened new doors to my life and my heart. I could literally look at her all day and hold her till my arms give in. [sic]

"But mainly I will always be there for her as her daddy, her friend and her confidant! Daddy loves you baby, you’ve changed my life!" with three red heart emojis.

What health issues has Azaylia been fighting?

Two months after Azaylia's birth last year, she was diagnosed with leukaemia.

Ashley shared the news on Instagram as he explained he found out something "no parent should ever have to go through," before adding: "I found out my beautiful daughter Azaylia Diamond Cain got diagnosed with a very rare and aggressive form of leukaemia which has come with many complications."

The baby girl went through a number of treatments, including a bone marrow transplant, but none were successful and the parents were left with "very few options".

The parents set up a Go Fund Me page in a last effort to get their daughter the treatment she needed, which was located in Singapore. But after raising £1.5million, they were dealt another devastating blow as doctors found two tumours on her brain with consultants telling them she could have "days to live".

What's the latest on their daughter Azaylia?

Ashley and Safiyya's daughter is spending her last days at home with her parents.

As the disease continues to spread, Azaylia has lost movement in her face. Sharing a sweet clip of her playing with her dad, Ashley wrote: "She's losing some movement on one side of her face as a result of the tumours but she's still the most beautiful little girl," with a red heart emoji.

The pair "pray for another day" with their baby girl as she continues to play and smile with them.