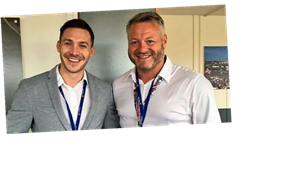 Mick Norcross has tragically died at the age of 57.

The businessman, who famously owned Brentwood hotspot The Sugar Hut, rose to fame on the hit ITVbe reality show The Only Way Is Essex.

The handsome star will be greatly missed and already an outpour of support for his family has come from fans and celebrities alike.

However, many of us will also know him for being the father of fellow TOWIE star Kirk Norcross.

Their close bond was apparent on the show, but the 32 year old did not really connect with his dad until he went to live with him at 18.

Kirk was actually raised in where he called “the bad side of Essex” by his mum Julie and they had “no money.”

Meanwhile, across the county his father was living a millionaire lifestyle.

When he reached adulthood he moved to live with his dad, whom he credits with saving him from a somewhat bleak future.

Back in 2012, he told the Daily Star: "People in Brentwood have a lot of money and a flashy Essex lifestyle.

"I'm not from here really. My mum is from the bad side of Essex, where people struggle.

"She has nothing, no money, and it's hard for me to see.

"But for my dad it's the opposite. He's got money, champagne and all the trimmings."

Kirk continued: "Kids on my estate have struggled to find work or fallen into crime.

"It's not a good area and life is hard. I know I'm lucky that my dad got me out of there."

On the show, also in 2012, Mick discussed his role in Kirk’s childhood with his son.

He said: "I just think maybe there's been bits missing out of our lives where, when you were growing up, I wasn't around as much as I should have been.

"I wasn't there enough for you growing up, but all I want to say to you is I'm here for you now.

"I will be here for you. I want to do the things we didn't do that we still can do."

Despite occasionally falling out over women, particularly when Mick asked co-star Maria Fowler on date after Kirk had fallen out with her, the pair’s relationship went from strength to strength.

When Kirk had kids of his own, Harry and Violett, Mick played the role of loving grandfather.

On Mick’s 56th Birthday back in 2019, his son shared a collage of snaps of them together to Instagram.

“Kids looks up to their dads as if they are superheroes… well I'm 31 I still look at you like you're my superhero!

"Grandad would be so proud to see the man you turned into!!