Many of us learnt about Truganini at school, where she was invariably referred to as the last Tasmanian Aboriginal. That myth that was widely perpetuated until at least the 1970s.

Historian and writer Cassandra Pybus has a far more personal connection: her ancestors spoke about an Aboriginal woman who walked across their farm on Bruny in the 1850s and ’60s. She later understood her family was a major beneficiary of the expropriation of Truganini’s traditional country. George Augustus Robinson, later Port Phillip’s so-called Chief Protector of Aborigines, was a friend of her great, great grandfather’s.

“For all my adult life she’s been in my mind … I stand on her shoulders basically.” 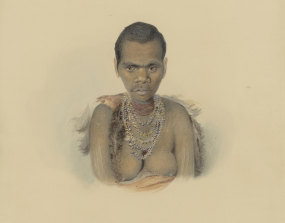 Truganini (mislabelled as Fanny) by Thomas Bock, ,1836. Copyright – The Trustee’s of the British MuseumCredit:British Museum

A professor at the University of Sydney and author of 12 books, Pybus’ new book examines Truganani’s life, drawing heavily on material in Robinson’s journals. Robinson and Truganini met when she was not much more than a child, at which stage she had lost all her family, and subsequently travelled together for five years. While seeing himself as her carer, Robinson made many false promises to Truganini and her extended family, about independence and liberation, and used her to help him find Indigenous people throughout Tasmania.

Other sources cited by Pybus include direct accounts of people who had met Truganini. “I set myself the rule because I am sick of all the myth-making … I wanted the contemporaneous accounts.”

A Nuenonne, Truganini was born to the senior man of the clan, Manganerer; her mother was possibly a Ninine woman. The picture Pybus paints is of an intelligent, resourceful, quick-witted, strong-willed woman. According to her friends among the settlers at Oyster Cove, where she spent the last years of her life, she was affectionate and loved children.

“She learnt at a very early age how to negotiate this shockingly apocalyptic world that she is growing up in,” says Pybus. 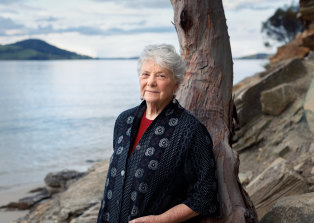 The book documents the wholesale murder of Aboriginal people, as well as the abduction, rape and brutalisation of the women and removal of their children. Wholesale devastation of the environment by European settlers is also recorded.

“It’s an extraordinary story in the history of the modern world, and we can’t turn away from that. It begins when she is a child and it ends when she dies. She’s the person you’ve got to focus on because … she’s very well-documented – maybe not by our standards – but for an Indigenous person in the 19th century.” 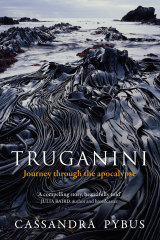 Despite inhabiting “a monumentally tragic narrative”, Truganini is not a tragic figure. “Her entire family, her kids, everyone she knows, everything she has ever known is lost but she survives … She is sustained by her own belief system, she is sustained by her belief in herself. You can’t imagine the weight of sadness and horror.”

That Truganini lived to nearly 70 is extraordinary, says Pybus, especially given she contended with extreme physical deprivation and disease. “Her survival is not based on collaboration or complicity at all, her survival is to do with the way in which she negotiates her way on her own terms through this world, right through to the very end.”

One thing that helps sustain her is access to her country. Throughout almost her entire life, Truganini was able to negotiate access to Bruny Island.

Much is revealed about Robinson, ironically on what he describes as a God-given mission to capture all Tasmanian Aboriginals. Despite understanding that Indigenous people were at one, resourceful and happy in their home country, he persists in removing them.

“He knows he has no chance of turning them into good, dutiful Christians as long as they’re in their country. He understands he has to break that connection with country in order to break their spirit basically, in order to turn them into people that they are not,” says Pybus.

“What he has never factored in in his great plans to save them is that they might all die. Once he realises that he starts to capitalise on it.”

Colonial perspectives on Australian history, especially with regards to First Nations people, are hugely problematic. Pybus is aware of the responsibility involved with telling Truganini’s story. “I think you have to tread very carefully. I am not in the position to attempt to imaginatively enter her mind. I can’t, I couldn’t write a fiction about her, I can’t imaginatively put myself in her shoes. I would, quite rightfully, be accused of cultural appropriation if I did that.

“Basically she went through something that is beyond our capacity to imagine. If anyone wanted to – Rachel Perkins are you listening – I would encourage an Indigenous filmmaker to take this on … it’s an unparalleled story.”

Documenting people ignored in history has been a preoccupation for Pybus. She has written about black convicts sent to Australia, as well as enslaved African-Americans. “Again that’s about finding a way to tell their stories from small fragments of history, to say these people have got significant roles to play in history, that is my major motivation.”

“We can’t leave people out because we haven’t got their personal diaries or a whole bunch of letters or their own words,” she says. “My whole shtick is to recover the stories of people who have been left out of history. She hasn’t been left out but the person has – she’s just been a symbol.”