Feminism and the royals aren't two subjects that collide very often. Queen Liz? Not big on the bra-burning, which is not to say she isn't a feminist. Royal protocol just dictates she has to be a bit more sneaky about it.

Yet "Megxit" – as it's being called – has seen both things forced together like that awkward cousin you keep trying to set up with a work colleague for dinner. 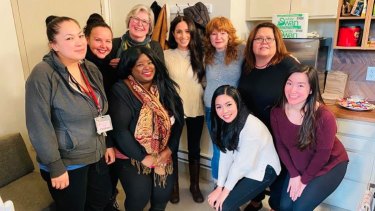 Meghan was seen for the first time in Vancouver last week at the Downtown Eastside Women’s Centre. Credit:Facebook

Last week, Meghan popped up at The Downtown Eastside Women's Centre in Vancouver. It's not a flashy charity that would generate a lot of press, but what it is is important. It's "ground zero" for violence against indigenous women and girls in Canada and one of the loudest voices when it comes to justice for missing and murdered indigenous women on the Highway of Tears in British Columbia.

During a time when Britain has gone batpoop insane with "Megxit", that's where Meghan chose to appear. That's where she chose to focus the spotlight that will inevitably follow her for the rest of her life. That's where her presence could actually make a difference.

Like many millennial feminists, we want to approach the idea of taking down the system with evangelical zeal: tossing a lit match and strutting away from a slow-motion explosion just like Rihanna. Yet sometimes the most feminist thing to do – and smartest – is remove yourself from the system completely. Especially when that system is cooked.

Maria Lewis is a journalist and author.