Joe Murphy remembers the moment he first realised that Younger, the fluffy Darren Star-produced US TV series he started working on in 2016, had become a cult hit.

The Aussie TV writer – originally from Tangambalanga, a town of about 450 people just outside Wodonga in northeast Victoria – joined the show in its third season when “it was still sort of the little show that could”. 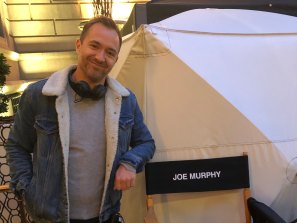 Aussie screenwriter Joe Murphy on the set of Younger.

“I was always trying to convince people, ‘You’ve got to watch this show, it’s really fun, like Sex and the City-lite’,” he says from his office in LA’s Beverly Grove. But it was a return visit to Australia for a friend’s wedding that proved the show’s unlikely reach.

“I’d mention to people, ‘I’m working on this show called Younger, you probably haven’t heard of it’, and their faces would drop. ‘Younger! It’s my favourite show! Even my husband watches it when he’s ironing his shirts!’ That’s when I was like, ‘Oh, this show is really striking a chord.’”

As the series, which airs in Australia on Stan (Stan is owned by Nine, which also owns this masthead), launched its seventh and final season this week, Murphy’s surprise about its devoted following remains understandable. Despite boasting the proven pedigree of showrunner Star (responsible for TV classics Melrose Place and Sex and the City), the show is feather-light, driven by the kind of goofy, high-concept plotline you’d find in a mid-noughties romcom. 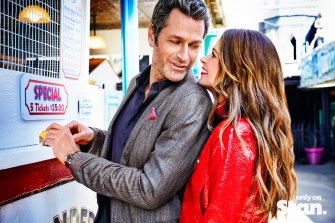 Sutton Foster as Liza and Peter Hermann as Charles in Season 6 of Younger.Credit:Stan

Centred on Liza (Sutton Foster), a 40-year-old divorcee who poses as a 26-year-old Millennial to land a job at a publishing house, the show has wrangled both biting barbs and emotional drama from issues like ageism, gender politics in the workplace, and generational divides. But at its core it’s an escapist delight, eye-candy set amid a fantasy New York of glamorous social soirees, grungy artist lofts, and endless inter-office hookups.

How did such a lightweight series become one of TV’s most beloved and critically-revered shows?

“It’s just one of those shows that when people discover it, they become obsessed. It’s a feelgood show where the stakes can be high or we can have characters crushed by beams or all kinds of ridiculous things,” Murphy says.

“I think when people first watch it they put it in that romcom box, but it’s also a very feminist show about women in the workplace sort of prioritising their friendships. I don’t think anyone’s tuning into Younger to get their hot take on the topic of the day but I do think we have a way of letting the characters experience what people go through in a sort of believable, grounded way – even though they’re in, you know, insane apartments in New York City.” 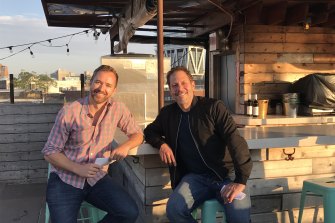 The show’s extreme bingeability has also been key to its success, adds Murphy.

“I’ll get a text from someone going, ‘Oh my god, I just started watching Younger, I love it’, and then three days later they’ll be like, ‘I’ve watched all six seasons, when is season seven coming out?’ It’s like crack television.”

True to its escapist ideology, the show’s final season sidesteps the ugly realities of COVID. Murphy says there was a “real push-pull” in the writers’ room over whether the show would address the pandemic or not.

“In the end we thought, you know, it’s the final season and we wanted to make sure the characters were at the forefront of the story and not overshadowed by something as tragic as COVID. It would give the show a heaviness that may not sit so well with the tone,” he says.

“This show is a breath of fresh air for so many people. There’s a lot of heavy shows on TV, you can find doom and gloom around every corner. But for Younger, I think people have always enjoyed coming to our show and feeling pretty good at the end of every episode.”

Murphy, who started his TV career in Australia as a producer on Deal or No Deal, moved to the US with his husband more than a decade ago in a bid to get into scripted television. After tireless networking, including dropping off his resume at TV sets around New York (“It was tragic and desperate,” he says), he landed gigs as a producer’s assistant on shows including The Carrie Diaries, The Leftovers and Nurse Jackie, leading to his writing gig on Younger.

He’s also currently a writer on Star’s Netflix series Emily in Paris – a show that, despite exhibiting a breezy tone not too dissimilar to Younger’s, has somewhat infamously failed to connect in the same way.

“I think [Emily] was unlucky with the timing of when it came out right during the pandemic. When you’ve got such a heavy backdrop, maybe this fish out of water story about someone moving to another country – well, there’s probably a disconnect,” Murphy offers with a wry laugh.

He says while Star has a knack for “baking likeability” into his characters as evidenced by Younger’s cohort of fan-faves, Emily perhaps had a tougher start bringing people onside.

“She’s sort of like your Tracy Flick high-achiever, storming into a country and explaining to them why American culture has a better read on marketing than French culture. Immediately you’ve got a battle to fight there,” says Murphy.

“There’s definitely an element to Emily that we see and maybe don’t like; the pluckiness, the incessant drive and hustle that, particularly for Australians, is a very American quality. We’re very much Tall Poppy Syndrome, don’t blow your own trumpet. But in America that’s considered how you get places, how you move up the ladder; you have to speak your truth and make sure you’re being heard. So I can see how that would definitely not make people embrace Emily too quickly.”

Murphy says that as a show “still finding its feet”, he can understand the global ribbing Emily copped from irate viewers.

“I can see how easy it is to make it a punching bag or an internet meme, which at the end of the day is fine. A lot of first season shows take time to find their tone and their characters’ dynamics, so we’ve been pretty excited about what we have in store for Emily,” he says.

“We’re doing our best in season two to give her somewhat of an apology tour. She’s got some growing up to do and she won’t always be winning. I think people are going to learn to love Emily as much as Liza.”

The final season of Younger is now streaming on Stan.