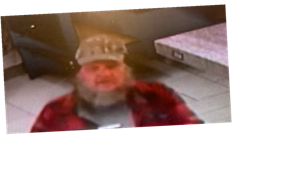 Police are searching for a man who they say stabbed a restaurant manager several times after he was asked to wear a mask. The incident occurred at a Jack in the Box in League City, Texas.

Detectives have identified the suspect as 53-year-old James Schulz, described as a “bearded, white male” and a “transient.” A warrant has been issued for his arrest for the stabbing, which took place on Wednesday night.

According to police, the suspect “belligerently refused” to cooperate with a store policy that requires face masks inside the establishment due to the COVID-19 pandemic. He allegedly recorded the incident to show his lawyers, believing he was refused service because he is homeless.

The suspect confronted employees before attacking the restaurant manager. Police believe the suspect tackled the manager, then used a pocketknife to stab the manager three times in the arm and upper torso.

UPDATE: Arrest Warrant Issued for Suspect
League City Police Department detectives have identified a suspect in the stabbing of a Jack in the Box manager. Officers are actively searching for James Schulz (8/8/67) who is believed to be a transient.
An arrest warrant has been issued for Schulz, who is suspected of stabbing the manager at the Jack in the Box restaurant located at 1503 W. League City Parkway on Wednesday, March 17. The incident began when the suspect refused to cooperate with a store policy to wear a face mask. After confronting employees, the suspect attacked the restaurant manager with what appeared to be a pocketknife. The manager was stabbed three times in the arm and upper torso. Employees intervened to defend their coworker and then the suspect fled the scene. Officers searched the area around the scene with a K9 unit. The suspect was not located however, several pieces of evidence were recovered. Officers believe the recovered property was discarded by the suspect as he fled the area on a bicycle.
The injured employee was transported to a nearby hospital and was treated and released.
If you have any information, please call 281-332-2566

The suspect fled the scene after employees stepped in to defend the manager.

During an initial search, Schulz was not found, but several pieces of evidence were recovered, including his backpack, bicycle and cell phone, possibly discarded by the suspect as he fled the scene.

The injured manager was transported to a local hospital, treated and released.

“It’s a very polarizing situation,” League City Police Chief Gary Ratliff said during a news briefing Thursday. “Where some folks don’t believe that there should be masks and others do.”

On Wednesday, March 17 at approximately 8:10 p.m., League City Officers responded to an…

Texas Governor Greg Abbott lifted the state’s mask mandate earlier this month, allowing businesses to fully reopen, despite the guidance of health experts. However, many individual businesses continue to enforce mask-wearing under their own policies.

“A lot of these people have had some of these events, I don’t know this manager, but have had personal events with loved ones that have died and passed away as a result of COVID, as some of our officers have,” Ratliff said. “All I would ask is that people respect the opinions and the policies of these businesses.”

He added, “You can refuse to do business at those locations, or whatever it is you choose to do, but there’s no reason to resort to aggressive behavior like this.”

Student loan forgiveness: Here's the number of eligible borrowers who applied by US state
Celebrities Posts