In Homer’s myth, Odysseus eventually regains his homeland, the Greek island of Ithaka, but there is no end in sight for Julian Assange’s odyssey. 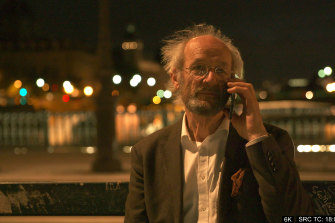 Julian Assange’s father John Shipton in a scene from the documentary Ithaka.Credit:

In January last year, when a British judge ruled against his extradition to the US on charges of military and diplomatic secrets on the WikiLeaks site, it looked as if he could be set free, but the US government ignored the judge’s view that extradition would put him at risk of suicide and immediately lodged an appeal. Fifteen months later, he’s still enduring the harshness of Britain’s Belmarsh Prison, where, last October, he suffered a mini-stroke.

Ben Lawrence’s documentary is about those who have been leading the campaign to have him released – his partner and lawyer, Stella Moris, who bore him two children during the years he spent under the protection of the Ecuadorian Embassy in London, and his father, John Shipton, a tall, soft-spoken and rather elegant 76-year-old who bears a strong resemblance to his son and is just as opinionated.

He has never been shy about venting his complaints about journalists, for example. He believes them to be beholden to those with money and power. Nonetheless, he fronted up every day for media interviews during the months leading up to Assange’s extradition hearings, explaining that he was there to speak up for his son because he could no longer speak for himself.

In the film, which was produced by his other son, Gabriel Shipton, he’s even persuaded – reluctantly – to open up about his absence during Assange’s childhood. After separating from the young Julian’s mother, Christine, when the boy was only three, Shipton did not see him again until he was in his 20s. For reasons he still doesn’t understand, he had no feeling for family life in those days, he says, but he’s certainly made up for it since.

Lawrence’s cameras follow him and Moris as they travel back and forth across Europe, stitching together a coalition of Assange supporters who are still standing by him. One is the UN’s special rapporteur on torture, Nils Melzer, who admits he was loath to take up the case until he saw Assange in Belmarsh, looked closely at his medical history and realised the damage done to his health amounted to psychological torture.

If he is extradited – a British judge on Wednesday formally approved it, but he still has avenues of appeal – and found guilty in the US, he will be the first publisher to be convicted under the country’s 1917 Espionage Act. It’s a possibility that strikes fear into the mainstream media, especially The New York Times, which worked with him in making the classified documents public.

Shipton remarks on this with a certain satisfaction, but the film leaves him in despair. Even if the US fails in its subsequent appeals, it can go on trying for as long as it likes. In the meantime, Assange remains in Belmarsh. Ithaka is not even on the horizon.