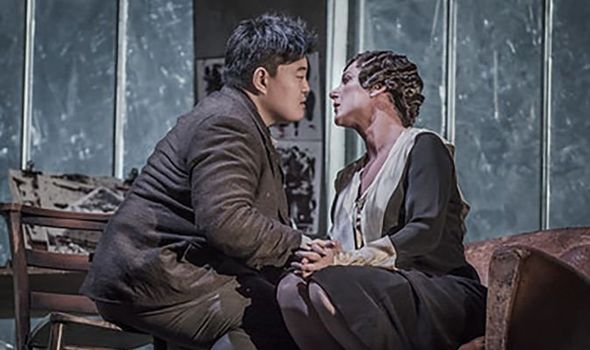 This classic production by the late Jonathan Miller strengthens that effect. In the first half of the opera, we see the four carefree artists, Rodolfo, Marcello, Colline and Schaunard thoroughly enjoying their Bohemian lifestyle in a Parisian attic and Miller’s direction emphasizes their carefree existence. Then Mimi enters, Rodolfo falls in love with her, and the scene is set for all that follows.

As Mimi’s illness takes hold, Rodolfo realises that he cannot look after her. As a poet, of course, it never occurs to him that he ought to get a proper job and earn enough to pay for medical treatment, so they split up. But she comes back to die in his arms and Miller’s version strongly brings out the contrast between the fun-filled beginning and the sombre conclusion.

A few years ago, the ENO replaced this production with another which, in its attempt to do something different, lost much of the magic. It is good to see the old production back again.

This time, they have given a young cast the opportunity to show their talents and the results are very promising.

Irish soprano Sinéad Campbell-Wallace made an excellent ENO debut in the role of Mimi. She has a beautifully clear voice and was particularly good in the final scene. As her confidence grows and she tackles more leading roles, she will become even better.

Matching her with Korean tenor David Junghoon Kim in the other leading role of Rodolfo was a good piece of casting. I

have seen both roles acted in more dominating style, but underplaying them as these two did was very effective in letting the story and the music do their jobs.

Of Rodolfo’s room-mates, Charles Rice both acted and sang the part of Marcello excellently, while William Thomas (Colline) and Benson Wilson (Shaunard) were both very good examples of the excellence of the ENO’s Harewood Young Artist programme.

For real individuality, however, my top marks go to Simon Butteriss who brought great humour to the double roles of the landlord Benoît and Musetta’s hapless old man companion Alcindoro.

As a seasoned performer of Gilbert and Sullivan old man roles, Butteriss added a delightful touch of absurdity.

A good performance of a great production of a terrific opera ‑ so why only three stars?

Well, that is partly because I have seen it several times before, sometimes performed better, but there is one aspect that has always bothered me: the translation by Amanda Holden.

Both the stress pattern and metre of her words in English sometimes do not fit the music as well as the original Italian.

Translating an opera is always a problem, but this translation seems to bring in extra syllables rather too often.

Also, on this occasion, I had some reservations about the musical balance.

Occasionally the singers seemed to be struggling to make themselves heard above the orchestra, and sometimes the conductor Ben Glassberg was taking things too fast for my liking.

One of my favourite arias in La Bohème is Colline’s lament near the end when he is bidding farewell to his overcoat, which he is selling to buy medicine for Mimi.

This can be an emotional highpoint: it’s not just the coat he is saying goodbye to, it is their entire carefree existence.

William Thomas sang it beautifully, but it was too fast for me and lost most of its potential impact.