Labor has asked the federal Auditor-General to look into the escalating cost of Australia's $90 billion submarine program as more than 100 local businesses registered interest in making specialised equipment for the fleet.

The French company building the nation's 12 new attack-class submarines, Naval Group, last month called for expressions of interest from local companies to make 23 pieces of equipment, including the steering gear and weapons handling systems and the main shaft line. These items were manufactured offshore when Australia's Collins-class submarines were built in the 1980s and early 1990s. 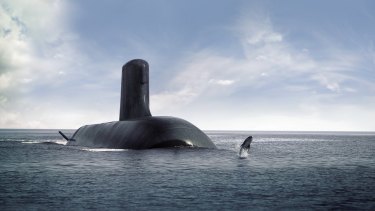 Australian companies have expressed an interest in manufacturing specialised equipment for the future submarines.

As of Friday, 124 companies had applied to become "tier one" partners under a local manufacturing package worth almost $900 million. Another 1964 had registered their interest in becoming part of the wider supply chain to build and sustain the 50-year submarine program.

This masthead last month revealed Defence officials had secretly budgeted for the submarines to cost almost $80 billion five years ago, despite publicly stating at the time the estimated price tag was $50 billion. The expected cost was this year revised to $90 billion.

In a speech to the Submarine Institute of Australia's biennial conference on Tuesday, the Opposition's defence spokesman, Richard Marles, will say that "being upfront and honest with the Australian public about how their money is being spent is not optional".

"Hiding massive cost increases from taxpayers is unacceptable," Mr Marles is expected to say. "This is precisely the kind of behaviour that destroys public trust and eats away at the public's confidence in those elected to represent them.

"I have now written to the Auditor‑General to request an investigation into the failure by the government to disclose these vast cost increases."

The move could set up another headache for the Morrison government after the Australian National Audit Office highlighted significant concerns with other federal projects such as the $100 million Community Sports Infrastructure grants program and the purchase of land next to the Western Sydney airport.

The first future submarine is not slated to enter service until the mid-2030s, while the delivery of the last will take place in the mid-2050s. While the construction price tag alone now sits at $90 billion, the attack-class submarines are estimated to cost at least $225 billion to build and maintain until the middle of the century.

Labor and defence industry experts have raised concern about the original contract in 2016 not locking in local content requirements, which sparked the Morrison government and Naval Group to agree in February to give Australian firms more than half the work on the program.

"Australian manufacturers have shown in this response that they stand ready to step up and play their part in building submarines that will be critical for Australia's defence," Mr Davis said. "The potential benefits for the nation from this program are immense and will last a generation."

Defence Industry Minister Melissa Price said the level of interest expressed by Australian businesses confirmed the local industry was ready to play a vital role in the delivery of Australia's world-class submarines.

Defence Minister Linda Reynolds will tell the conference on Tuesday that submarines an indispensable asset to the nation's defences because they "deter potential adversaries, respond to hostile actions with credible force, and protect our maritime interests". Meghan Markle Gets Real About Dealing With Royal Life, Motherhood and More The Untold Truth Of Selling Sunset’s Oppenheim Twins
We and our partners use cookies on this site to improve our service, perform analytics, personalize advertising, measure advertising performance, and remember website preferences.Ok