Labor is reviving a plan to cement the purpose of superannuation in the law in a bid to block proposals from Coalition MPs to tap into retirement savings to solve a host of financial woes facing workers.

Opposition financial services and superannuation spokesman Stephen Jones said Labor remained committed to legislating a purpose for the super system to enable it to “cut through all of the crazy propositions that have been advanced over the last year”. 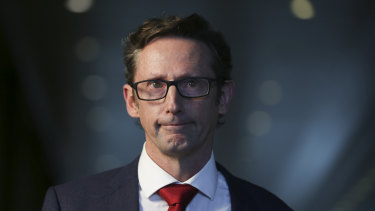 Labor’s Stephen Jones: “The purpose of superannuation is to provide financial security and a dignified standard of living for Australians in retirement.”Credit:Alex Ellinghausen

Legislating an objective would mean all new policies affecting the super sector would need to be considered with this purpose in mind.

“The purpose of super is to provide a secure dignified retirement – not to fix every other area of this government’s policy neglect,” Mr Jones said.

In the past 12 months, a group of Coalition MPs have recommended using super balances to help people in advance of their retirement.

Liberal MP Tim Wilson has launched a “Home First, Super Second” campaign to let first-home buyers access a portion of their super funds early for a property deposit. In his 2020 book Bad Egg: How To Fix Super, Liberal senator Andrew Bragg said Australians “should be allowed to use their mandatory superannuation contributions to purchase a first home”.

The federal government last year allowed 3.5 million workers facing financial difficulty during the coronavirus pandemic to withdraw a collective $36 billion from their super funds, and workers can already access their super early in cases of financial hardship or for medical treatments including weight loss surgery and IVF.

There have also been suggestions super could be used to fund aged care, be withdrawn by domestic violence victims, and for a portion of the legislated rise in the superannuation guarantee to be optional.

Enshrining an objective for the system in the legislation was a major proposal from the Financial Services Inquiry in 2014, led by former Commonwealth Bank boss and ex-Future Fund chairman David Murray.

It said broad political agreement should be sought about the objectives of the system and recommended the government report publicly on how policy proposals affecting super were consistent with achieving this objective.

The Murray inquiry recommended this objective be to “provide income in retirement to substitute or supplement the age pension”.

Subsidiary objectives, which were to be introduced through regulation, included smoothing consumption over someone’s life, managing risks in retirement, alleviating fiscal pressure on the government, providing safeguards and investing in the best interests of fund members.

“David Murray warned us seven years ago that without a legislated objective for superannuation, the system would be undermined by constant chopping and changing,” Mr Jones said. “Since then, the government has used super as the answer to their policy failures in everything from housing to domestic violence and the cost of tertiary education.

“The purpose of superannuation is to provide financial security and a dignified standard of living for Australians in retirement.”

The superannuation industry has previously called for the government to legislate an objective for the system.

Labor’s push would revisit elements of legislation moved in 2016 by then financial services minister Kelly O’Dwyer. Ms O’Dwyer introduced legislation following the 2016-17 budget’s announcement that an objective would be made into law. This would have required all new bills and regulations relating to super to include a statement on how they were compatible with the objective of the system. The legislation did not progress any further.

Labor’s proposed objective is significantly different to that put forward by Ms O’Dwyer and the Murray inquiry.

It has the potential to inflame debate about how much is enough for a “dignified” retirement, which has been a major source of discussion during the fight over whether the superannuation guarantee should rise to 12 per cent by 2025 or remain at 9.5 per cent.

The Retirement Income Review released in late 2020, which found the current rate could be adequate provided balances were used more efficiently, recommended an objective be agreed on for the entire retirement system.

Superannuation Minister Jane Hume did not respond to requests for comment.