Federal Labor has pledged $6 million to plan a trackless tram route to connect Caulfield Station, Monash University in Clayton, Chadstone shopping centre and Rowville, if it wins the next federal election.

The promise of a business case to investigate the project is the Opposition’s first election commitment in Victoria ahead of the 2022 federal poll. 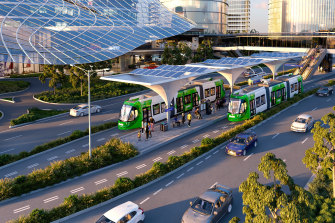 Federal Labor has promised $6 million for a business case on the trackless tram proposal.

Similar to an electric bus, the Trackless Rapid Transport (TRT) proposal rely on battery-powered vehicles with rubber wheels that use sensors rather than steel tram tracks.

“This project will get locals to work, to the shops and to university, allowing them to spend more time at home and less on the road,” Ms King said at a press conference at Monash University on Thursday morning.

“This is the kind of infrastructure an Albanese Labor Government will make a priority, creating Australian jobs and delivering a better life for working families.”

The state government has not matched Labor’s funding commitment, but its support for the project was outlined before the 2018 election. 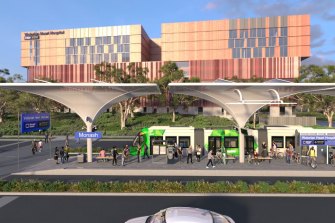 If it was eventually approved and funded, the trackless tram route would run from Caulfield to Rowville, via Monash University’s Clayton campus and the Chadstone shopping centre.

The Victorian government assigned $3 million for a light rail link at that time, but the project has been mostly dormant for the past three years, overshadowed by the Suburban Rail Loop, which also stops at Monash University in Clayton.

In the past year, Monash University and Vicinity Centres, which owns Chadstone among a string of high-profile shopping emporiums, have lobbied for government support for their $1.4 billion proposal for trackless trams along the same route.

Under that proposal — which appears to have been endorsed by state and federal Labor — dedicated lanes would be built along a 19-kilometre route from Caulfield to Rowville via Dandenong Road, Ferntree Gully Road and Blackburn Road between Caulfield and Monash Clayton (via Chadstone), and then via Wellington Road to Rowville.

Thirteen new stations would be built, including Chadstone and Monash University Clayton, and the project would be open to the public by 2025.

Services would run every five minutes in peak periods and take 20 minutes between Caulfield and Monash Clayton. The trip between Monash Clayton and Rowville would take 11 minutes.

The vehicles would have an average operating speed of 33-59km/h, compared with the 16km/h average speed of a Melbourne tram.

The proposed route has a long history. It follows a 1969 proposal for a Rowville railway line, and it was later planned for by the Baillieu government (2010-2013) but ultimately dropped.

The project became a point of conflict with the federal Coalition in 2018. It pushed for a train line to be built along the alignment and designated $475 million to “Monash Rail” – money that has not been spent.

This train link would connect Huntingdale and Monash’s Clayton campus, and eventually Rowville, without a stop at Chadstone.