Farm groups are warning the risk of worker exploitation in the horticulture industry is rising, blaming state governments for not developing plans to bring in foreign workers as the summer harvest heats up.

Acute shortages in the agriculture workforce are being driven by coronavirus restrictions on overseas workers entering the country. 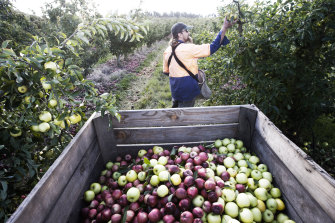 Farmers are calling for an urgent solution to labour shortages as harvest heats up. Credit:Louie Douvis

Victorian crops are ripening now, and industry estimates they need 26,000 to pick their summer crops, but just 350 Australians have signed up to the federal government’s program that offers a $6000 payment to entice locals to fill the labour gap.

Australian Fresh Produce Alliance (AFPA) chief executive Michael Rogers said his organisation condemned any worker mistreatment, but financial pressure of a missed harvest may spur some in the industry to "make decisions they shouldn't".

"We are advocating for a solution to worker shortages because desperate people need workable solutions," Mr Rogers said.

"The top 20 per cent of growers in terms of innovation, and profitability, are also the most compliant with the law and rely on documented workers through seasonal programs," Ms Germano said.

In a typical year more than 200,000 backpackers would be in Australia on working holiday maker visas and 50,000 of them would be working on a farm at any time, coupled with around 14,000 seasonal workers – largely from the Pacific Islands.

There are now less than 7000 seasonal workers in the country, and about 40,000 backpackers, who typically work in hospitality as well as agriculture.

The National Farmers Federation chief executive Tony Mahar said just 1500 workers had arrived in the country since Pacific labour schemes restarted in August. He laid the blame on all state governments for lack of action, but singled out Victoria for not having at least developed health protocols for bringing in overseas workers.

"Right now 22,000 pre-vetted Pacific workers are ready and waiting to board a plane, but are being held up by inexcusable inaction by the states" Mr Mahar said.

"Victoria has yet to submit an acceptable plan for the safe arrival of workers as required by the federal government, and other states have chartered no more than four planes, despite having their plans approved."

Victorian Agriculture Minister Mary-Anne Thomas said her government was working on options to address the shortage, including workers from Pacific Islands.

"Growers are encouraged to seek advice from Agriculture Victoria about the programs and financial incentives available to help attract workers for the harvest season," Ms Thomas said.

Federal Agriculture Minister David Littleproud continued his criticism of Victoria, claiming the state government was "refusing to make a decision despite requests from industry and the federal government".

AFPA has proposed a plan to bring in 200 workers a fortnight into Victoria, to quarantine at Mildura in a privately-run facility.

"The federal Health Minister has in fact even gone to the extent of reassuring the Victorian Health Minister that it would not be an impediment to us stamping their visas, so it's clear the only road block is [Victorian Premier] Dan Andrews," Mr Littleproud said.

Last year the Fair Work Ombudsman found only 45 of 245 horticulture industry firms that had previously fallen foul of the law were still in business and compliant.