Lockdown changed season two of Bump, but will you notice?

Carlos Sanson Jr and Nathalie Morris are kneeling next to a wall of blue high school lockers and changing a (fake) baby’s nappy, while a (real) baby is jiggled just off to the side, waiting for its turn on camera.

They are filming a scene for series two of Bump, the breakout comedy about an unexpected teenage pregnancy and its fallout that premiered on Stan, which is owned by Nine, the publisher of this masthead, this year. When season two screens early next year, it will – for all intents and purposes – look the same as season one. 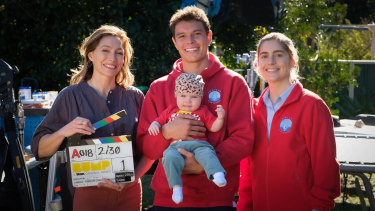 Except we’re not in Sydney’s inner west anymore. During season one, the show was shot around Glebe, Newtown and Enfield, with the fictional high school at the show’s centre even bearing the distinctive pylons of the ANZAC Bridge on its crest.

Due to COVID-19 and the resulting strict lockdown measures, season two has been filmed in the city’s south, with Sydney Secondary College at Blackwattle Bay swapped out for Inaburra School in Bangor.

“It’ll be annoying for the trainspotters,” says Claudia Karvan, who stars in Bump and is one of the show’s producers, along with John and Dan Edwards. “It was almost impossible to lock in locations during COVID. But we’ll just magically patch this one together. The architecture is exactly the same, I don’t even think anyone will notice.”

Bump is one of several productions that have continued to shoot throughout this second, stricter lockdown. The ABC surfing empire drama Barons has been filming on Sydney’s northern beaches, while the Paramount+ comedies Spreadsheet and Five Bedrooms, and the Binge drama Love Me, all filmed during lockdown in Melbourne this year. To keep things rolling, that has meant closed sets, regular COVID-19 testing and filming schedules changing daily due to the sudden unavailability of cast. 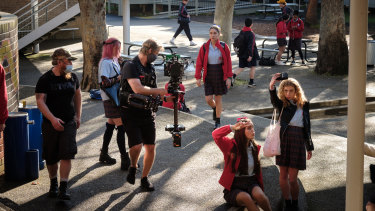 Nathalie Morris (centre) filming a scene at Sydney Secondary College for season one of Bump.

There have been two high-profile casualties – Russell Crowe’s thriller Poker Face suspended production in Sydney in August after two crew members tested positive, while an infected crew member on the reality show I’m A Celebrity … Get Me Out of Here, being filmed in northern NSW, sent the Byron and Tweed local government areas into lockdown last month.

“The minute someone becomes a casual contact or a close contact, we have to shut down,” Karvan says. “So lovely, honest actors would ring the night before and go, ‘Oh, my flatmate has a sore throat,’ and we go, ‘OK, sorry, we’re cutting you out of these scenes. You can’t come to work tomorrow.’

“Other actors we’ve written for, [have said] ‘No, sorry, I don’t want to quarantine, I live in Queensland. No, I’m not coming to join you.’ So you have to give storylines to other people.”

Director Shawn Seet faced the same problems on the set of Barons. Filming schedules could only be set a week in advance, locations were changed on the hop, as private houses filmed in prior to lockdown became unavailable, and actors who lived in locked-down LGAs had to be quickly written out.

“It was mental gymnastics,” Seet says. “You’d have to go, ‘This works out in this location, but hang on, we’ve set that other part of the scene in a similar location – does it match? I don’t know. We’ll just have to do it.’ It was a stretch, but it was kind of exhilarating.” 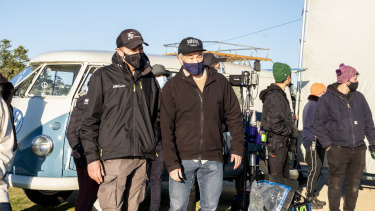 Confined spaces were also tricky to film in, says Seet. An old shed in Waratah Park was a key location, but only a few people were allowed indoors at any one time. “Once you put the crew in there, there’s no room for actors,” says Seet, laughing. Then, every 15 minutes, everyone would have to vacate the shed “to give it a good airing”.

“We were very rigid about how much we came into contact with people,” Seet says. “Even going shopping, we kept that to a minimum because everybody’s so grateful to be able to keep working. We just didn’t want that one little bit of close contact somewhere, it could all have come tumbling down.”

And while Karvan and Seet have, to some extent, enjoyed the creative challenges that have come with filming during the pandemic, there is one thing they won’t miss: the regular up-the-nose poking during COVID-19 tests.

“It doesn’t get any easier,” Seet says. “We had regular people who came to test us, and you get to know the ones who like to go deeper. And you think, ‘I’m not getting in that line today.’”