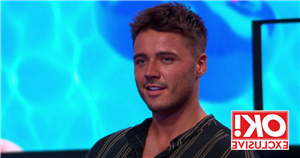 Brad McClelland has addressed his rogue comments on the Love Island reunion after he joked Lucinda Strafford and Aaron Francis hooking up had "turned him on", slamming Laura Whitmore's repetitive questioning in the process.

The handsome labourer from Cumbria was one of the ITV2 dating show's original contestants, but left the Majorcan villa after only two weeks following a public vote which left him and ex-partner Lucinda vulnerable.

Brad appeared alongside his 33 fellow ex-islanders on Sunday night's Aftersun episode, which saw the show's host Laura quiz the stars on what was, according to her, an "awkward" reunion.

The reunion episode saw producers orchestrate Lillie Haynes being brought on-stage during winners Liam Reardon and Millie Court's interview, Hugo Hammond being sat down with three of his 'exes' for a chat which made viewers cringe, and Sharon Gaffka, Aaron Francis, Lucinda Strafford and Brad all questioned on romances that they had all stated didn't exist.

Love Island fans weren't impressed with the forced feel of the episode either, with one Twitter user writing at the time: "Everything Laura says hangs awkwardly in the air, she doesn't get anything out of the contestants and also asks weirdly intrusive questions at the same time?"

After the Irish presenter asked Brad for his thoughts on ex Lucinda romantically pursuing Aaron as soon as he'd left the villa, he hilariously quipped: "yeah I loved it, it turned me on", shocking the whole nation with his unexpected reply.

Explaining why he went with such a witty response, Brad told us: "The reason I answered the way I did, is because every single interview I did upon leaving asked me 'how did seeing Lucinda with Aaron make you feel?'

"I'm sick of answering that question, I'm sure the public are sick of hearing us answer that question, so I thought 'd'ya know what? Screw this, I'll come up with a daft question!'"

He then jibed: "Ask a stupid question, get a stupid answer!"

According to the blue-eyed northerner, he and his TV-star friends had been sat waiting around at the ITV studios since around 2pm, with the show not even airing until 9pm.

Alcohol wasn't on the cards whatsoever, so assumptions made by fans that Brad's answers were down to him having a few drinks prior were quashed.

"The only options for drinks we had were bottled water, Coke, Coke Zero, Fanta, Fanta Zero and that's it."

The tactically-arranged seating arrangements were discovered by the islanders around an hour before the show aired, so they all had a fair idea of which questions would be asked later on.

"You can kinda guess looking at the seating arrangements", Brad said, joking that their choice of tables "wasn't gonna be random was it!"

"Sharon, Lucinda, myself and Aaron, that's a table full of gossip anyways", he added.

Brad wasn't the only unimpressed islander, as Georgia Townend, Sharon Gaffka and Shannon Singh all expressed their annoyance towards the evening.

Shannon, who was dumped almost instantly from the villa in a brutal twist, called it "pointless" and "boring", stating it was a "fu**ing waste of time".

After Sunday night's episode, she said on social media: “Well guys, that was a fu**ing waste of time, but I went, Miss 48-hour gang.”

Brad said of the evening's questions towards his fellow islanders: "I just think the questions that were asked, they've already been asked, I don't think there was any question that threw anyone really."

He continued: "I've done Q&As about me and Lucinda when I first came out, [and was asked] that exact question about how I felt about her and Aaron.

"I've said I wasn't too fussed about it, blah blah blah and I was like look, I'm bored of answering that question so I'll just say something daft!"

Making sure the record was straight, Brad laughed as he clarified: "Of course it didn't turn us on, it was two people kissing on TV, I dunno it might turn someone on, but definitely not me!"

On being asked about the presenter's constant referrals to how "awkward" it was amongst cast mates, Brad said: "There is actually no awkwardness between anyone, definitely not me and Lucinda.

Speaking generally about the evening, he continued: "I just think everyone thinks it's awkward, but it's not.

"By the time the reunion came round, any awkwardness had been ironed out, me and Lucinda's craic, that was ironed out then, no one has any hard feelings against each other."

He concluded: "We all knew when we walked in [what would be discussed that evening on the show], we were all sat together before it started, so all the gossip had already been spoken about. [in the run-up to 9pm]"

Laura took to her Instagram Story on Monday to "clarify a few things" as she said that her job is "not to organise seating" and that every decision is ran past Islanders before airing.

The Irish presenter put: "Shall I clarify a few other things? Hundreds of people work on Love Island. My job is not to organise seating arrangements. I barely know what seat I'm sitting in before the show as set changes so much.

For more updates on your favourite stars, sign up to our daily newsletter here