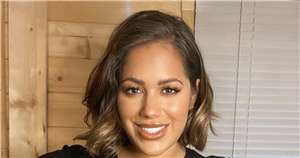 Malin Andersson has revealed that she and her boyfriend Jared have split after welcoming their two month old daughter Xaya.

The former Love Island star, 29, announced the news to her 291,700 Twitter followers as she shared how 'blindsided' she felt and explained that she is currently 'processing' it all.

Malin, who confirmed she was in a relationship June 2021, wrote: "I have always prided myself on being open and transparent on here, so I wanted to let you all know that myself and Jared are no longer together. We split around 4 weeks ago and I have since been trying to come to terms with everything and process it all.

"We are co-parenting Xaya as she of course comes first in all of this, but we would appreciate some space as we navigate through this separation.

"I don't want to go into any more detail at the moment, my baby girl is my main priority and I am building myself back up with what fuels my strength – friends, family, exercise and meditation."

She added: "I didn't expect any of this to happen, I truly feel blindsided.. but as always, I trust that the universe has a plan for me."

Malin and Tom started dating in 2018 before the former reality star discovered she was pregnant in May 2018.

Tragically their daughter Consy passed away aged four weeks old after she was born seven weeks premature on 23 December.

However in September 2020 Malin described how "justice has been served" after Kemp was jailed for ten months.

Malin shared a graphic photo with her 679,000 Instagram followers and opened up on to fans in the caption.

She wrote: “JUSTICE HAS BEEN SERVED.

“The last 2 years including my pregnancy have been absolute hell. No one knows half of what I’ve gone through and I haven’t been able to say much due to an ongoing police investigation.

“The father of my late daughter Consy has been jailed for only part of what he has done to me.”

Malin then told fans: “I’ll be giving my account of what happened in the coming week. Thank you for those that supported me, and those that called me a LIAR.”

Kemp was jailed for ten months after he admitted to assault occasioning actual bodily harm as he appeared at Aylesbury Crown Court on Thursday 3 September.

Malin was heartbroken after her Love Island ex Terry Walsh stated dating Emma-Jane Woodhams after meeting in the villa.

However the reality star reportedly had a brief romance with Emma's ex Tom and the pair were seen putting on a cosy display as they headed out for dinner and drinks in 2017.

Malin and Terry were contestants on the second series of Love Island in 2016 and were a couple until she left the villa.

However Terry quickly fell for new arrival, Emma-Jane Woodhams, before Malin returned to confront him in explosive scenes on the ITV2 show.

Malin told a shocked Terry as she returned briefly: “I’ve been watching everything”, to which he replied: “Yeah, but I said it was a test for me didn’t I? I didn’t say to you I was 100 per cent going to be with you.”

Malin responded: “Terry, we were together in that villa. I left that villa as a couple with you; we were official in there. You were my boyfriend.

“I came out of there supporting you. I know you didn’t come out, but I thought ‘I’m going to support him, he’s having a good experience with the lads’. Then a day later you’re hooked up. You were wanting to come out of there with me!?”